Israelis went to the movie theater and cheered when Gal Gadot walked onto the screen in Wonder Woman. Our very own here in so many ways. She served with pride in the Israeli army and makes no attempt to hide her nationality. So it was amazing to see that one of the “sites” that Conan O’Brien came to visit in Israel – was Gal Gadot. 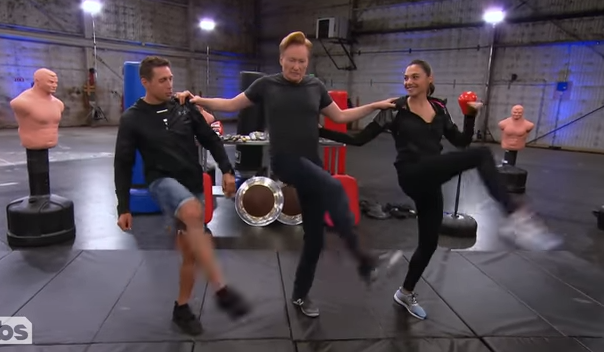 There isn’t much about Israel in this video but it’s still fun and funny to watch. Gal Gadot is charming; Conan is hysterical.

Gadot explains how she trained for her role in the movie and introduces her trainer. The trainer begins to explain how to initiate a proper kick and Conan being Conan goes for the laugh. The next thing you know, Conan, the trainer, and the actress are dancing and singing Hava Nagila.

The clip was supposed to be fun, and it is. You wouldn’t expect it to touch on the political, and it doesn’t. But in meeting with her, Conan is clearly recognizing the pride that Israelis feel in seeing one of our own achieve such success. And, perhaps more important, achieving that success without downplaying or ignoring where she came from.

Like all of his video clips in Israel, you can’t help but laugh. Conan and Gadot…amazing!

Conan in Israel – Laughs and Truth

Is Conan Thinking of Enlisting in the Army?