UPDATE: (8:00am,November 16, 2017) Before posting this blogpost, attempts were made to contact the author/editor. After no replies were received, I the wrote this piece. I have since heard from the author and there is certainly reason to believe that what I was given, and the pictures I posted, were out of context and indeed they led to a story containing a proper message for children. While I may take issue with certain wording, it seems that this has been taken out of context.

As soon as I clarify this, I will make a new post.

What would you do if you heard that Israel’s Ministry of Education was promoting racism against Jews and downgrading the value of the lives of Arabs? I assume the answer would be to fight and demand that people be treated fairly; that racism be rejected rather than promoted, and that terrorism of any sort be identified and condemned, rather than justified. Our most vulnerable population is our youth. They have open minds, that we are tasked with filling. And what we don’t want to fill them with – is racism, hatred, and/or the promotion or justification of terrorism.

So, when I saw a copy of a few pages out of a school book being used to teach English to Hebrew speakers that indeed promoted racism against Arabs, was filled with fear-mongering and also gave voice to justifying terror, well, to say I was shocked is a gross understatement. 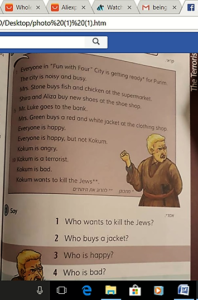 Look at the first picture and read the text:

Notice a few things in the setup for this English lesson: The Jews are busy getting ready for the holiday and they are all HAPPY. But, a guy named Kokum (no such name in Arabic, I checked, but who in their right mind does not understand that this is supposed to be an Arab??) is ANGRY, he is a TERRORIST and he is BAD.

While of course any terrorist is bad, let’s understand what the children are being taught with just these few words. Terror has a reason–it is ANGER. If my next door neighbor is angry, does that mean he is a terrorist? If my teacher yells and gets angry, is he a terrorist? In addition, not all bad people are Arab terrorists. There are many angry people who do bad things that are not terrorists.

Not all terrorists are angry. Not all Arabs are terrorists and not all terrorists are Arabs. Why do I assume the author is implying that Kokum is a terrorist? Because the attack described in this book has happened. More than once. Not that long ago, two Arab terrorists entered a synagogue in Jerusalem, and butchered four Jews and a Druze police officer.

And in this story, what is the result of Kokum’s anger? He goes to a synagogue. Why? Because, the book tells you, he wants to KILL JEWS.

But wait, there’s more! Take a look at the next part of the lesson: 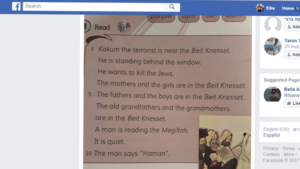 Kokum wants to kill Jews. He is angry. So, now a child is going to go to a Beit Knesset for Megilla reading and peer over his shoulder all during the reading because mean and ANGRY Kokum may come and kill him!

Israel, as a society, has made our voices loud and clear that the incitement found in the Arab school books is unacceptable and that Misrad Hachinuch ought to step in and do something about it.

That would be the perfect step to be taken here as well, but that presents one little problem. Take a look at who indeed approved the publication of the book:

Approved by the Ministry of Education and Culture 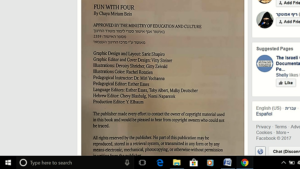 Yes, you read right! The Misrad Hachinuch, the Ministry of Education APPROVED this book!

There are five action items that must come out of this post.

And finally, the publishers themselves have, what appear to be, a legal problem. As you can see in the third picture above, the publishers made a statement in the cover page of the book:

“The publisher made every effort to contact the owner of copyright material used in this book and would be pleased to hear from copyright owners who could not be traced.”
This indeed sounds as if the publishers published something without legally having rights to the material and further calls into question how the Ministry of Education and Culture approved this text.
And below that curious statement, despite apparently not having legal claim to this text, the publishers added, “All rights reserved by the publisher.” Since the publisher has claimed all rights to this material, the FIFTH action item (#5) is that all parents and schools who purchased this material should be granted an immediate and full refund. Parents will have to go out and buy new books to replace this one; schools may feel responsible to replace the books, given that they included it in the school list without, apparently, taking the time to consider the full meaning of the story.
I have contacted the author and editor about this post, and if I get a response, I will update this post or write a new one. This is a story that must be followed, and I urge everyone to contact the Ministry of Education and Culture and ask them what kind of education we are giving our children, what kind of culture are we sharing with them – when the message they read in their school books includes racism and the suggestion that terrorism is an expected response to anger.

I want to make one last clarification. In writing this, I am writing against the ideas and subtext in the book/story. I am in no way impugning the author’s ability to write. One should “attack” an idea without attacking a person.

As human beings, we all make mistakes. How we respond to those mistakes is the real test. I call on the author to recognize that this story does not serve to educate our children and should be removed from schools and bookshelves everywhere. A true lesson for our children would be for the author to do the right thing.

(I have been teaching in the Israel school system for a number of years, mostly teaching English. While the issue with this book is certainly a serious problem, it in no way reflects the rest of the textbooks being used in other classes and schools. I have found the English textbooks in use to be quite well done and user-friendly.)