Amiram Goldblum is, supposedly, a very intelligent man. He must be since he teaches at Hebrew University, in Jerusalem, right? In fact, he is SO intelligent, that he’s a professor of Pharmaceutical Chemistry. And, you may not have known this, but apparently anyone with a degree in chemistry is a so smart that they are actually qualified to judge others, to call hundreds of thousands of people “terrorists” when the greatest crime they may have committed is jaywalking or speeding a bit over the speed limit (which honestly, shouldn’t have been set at 80 kilometers per hour in the first place).

We, settlers, that is, are good people who have chosen to live in our ancestral homeland on land that was, for the most part, sitting empty and unused for centuries. But the Professor Goldblum has a problem with us. He is enamored with all things Palestinian and therefore all things Israeli are evil and wrong. You can’t fix stupid, and the brilliant Professor Goldblum is an exceedingly stupid man. He has to be – first to think what he does, and second to be stupid enough to post absolute statements to Facebook when anyone with a whit of intelligence would know that there are very few absolutes in this world. But Goldblum lives above absolutes – he’s a professor of pharmaceutical chemistry, after all. He can make a statement that “every settler is a terrorist by definition.”

Goldblum was the leader of Peace Now for 20 years – while admitting that the name of the organization itself is stupid (“I find this name extremely difficult and it is even a source of embarrassment for me. I can’t even put the movement’s sticker on my car.” Source here.)

When you make a statement that can be nothing short of moronic, you cannot blame people for questioning your intelligence…or sanity. Every settler? I have a 6 month old grandson. Is he a terrorist? Hadas Fogel was murdered by terrorists when she was just four months old…Palestinian terrorists…real terrorists, Professor Goldblum. They slit her throat, stabbed one of her brothers, butchered another and killed her parents.

Shalhevet Pass was 10 months old when she was shot by a Palestinian terrorist and murdered. Was she a terrorist too? She must have been, according to Goldblum’s misguided and evil opinion. And a friend who was shot the night after his son was married?

A terrorist is, Professor Goldblum, determined as such based on action, not residency. Just as a professor should be judged by the things he does, and not the fact that some university hired him…to teach pharmaceutical chemistry. Terrorists are deemed as such not because of where they live, and not even how they think. A terrorist is determined as such based on actions – actions that cause or support terror and not even based solely on their political agenda. You are not a terrorist at birth, though you might turn into one in death. A terrorist is not based on your religion, though religion is often used as an excuse to terrorize others. 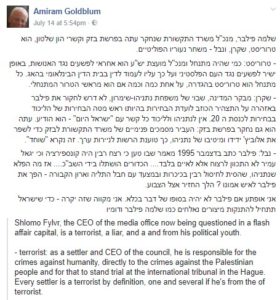 I looked up Professor Goldblum. I wanted to think he was an immigrant who came here with his fancy degree and therefore perhaps understands nothing of our country. I wanted to think that he was somebody who refused to serve or was too much of a coward. What I found was that he came from very patriotic parents. His mother served in the Irgun; his father was a professor and a senior officer in the Medical Corps of the IDF. And Goldblum himself? Amazingly enough, he served in the army. He fought in the Yom Kippur War. I guess that makes him a brave and stupid man, rather than only a stupid one.

One thing Goldblum was right about, however, is how others see him and those who believe in his absolutes, “I feel that people look [at the Peace Now sticker] and say: “What an idiot is driving this car.” – Give that man a cigar…at least he got that right. The car he is trying to drive off the cliff does indeed have an idiot as its navigator. Thankfully, few people are likely to listen to a professor of pharmaceutical chemistry who considers murdered infants to be terrorists.

Every man is made a fool through his own wisdom. (Desiderius Erasmus in “The Praise of Folly”)