Iran has threatened Israel. They say they will push us into the sea – much as five Arab nations tried and failed to do in 1948. I heard it and my first thought was “earthquake”. That’s right. It seems every time Iran threatens us, something there explodes or shakes. In many ways, Israel is at the center of the Iran-Western Culture fight, the “eye” of the storm.

But what many people don’t know is that it is actually relatively calm in the eye of the storm. As a child, I experienced one of the worst storms in US history. We were heading south to Louisiana and as my parents listened, they decided to turn a bit north to avoid the eye of the hurricane.

Sure enough, the hurricane turned north too. Battering winds and huge amounts or rain hit us…and then it got calm…as the eye passed over the small town in which we’d taken refuge. And then the second part of the storm hit. But the eye is calm, as is Israel today.

Perhaps part of this is experience. As a people, we have survived being attacked, gassed, axed, exploded, rammed, crusaded, inquisitioned… Iran? Been there, done that. Beat them then, will beat them now.

There arises in each generation, we have been told and more, we have experienced, an enemy who wishes to destroy us. One who dreams of our annihilation. So it was more than 3,000 years ago when Amalek attacked; so it was 2,370+ years ago when Haman plotted 80 years ago when Hitler planned a final solution. So it is today, when Iran thinks it will develop nuclear power and erase us from the map. 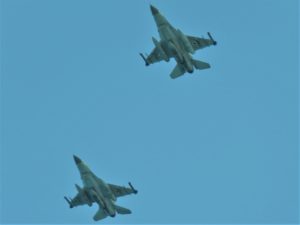 A few days ago, Iran said that within 48 hours, they would attack Israel. Israelis responded by going out of their homes, away from our shelters. We went to fireworks to celebrate the 70th anniversary of the rebirth of Israel. We filled the country with smoke…barbecues covered our land. We saw lights in the sky – our lights as we set millions of dollars of fireworks shooting into the sky and watched the heavens light up in colors. And on Thursday, we crowded the beaches and the hilltops all over the country to watch our air force fly.

Not against Iran, but as a sign of strength and love for hundreds of thousands of Israelis. We watched the planes streak across the skies as the waves rolled onto the shores of the Mediterranean coast.

The last time Persia/Iran set a deadline for when it planned to kill the Jews, the leader of the plot was left hanging from a tree. As I sat on the beach watching the planes, surrounded by hundreds of people, I knew that Israelis were anything but afraid.

There were moments when I wondered if the 48 hour threat would become a reality. Would sirens suddenly start while we sat there on the beach. Would missiles come flying? Nothing happened – other than great food, lots of sun, and the Israeli Air Force flying as strong and proud as the hundreds of flags.

In Israel it was calm but apparently in Iran it wasn’t. There was an earthquake and sand storms. People are quick to point out that sandstorms come regularly this time of year in Iran. Perhaps. Earthquakes are common in their region. True enough.

Was the timing divinely inspired? Of course – isn’t everything?

A few videos – apparently Israelis aren’t the only ones thinking that Iranians might want to start paying more attention to the God of Israel.

And Another End-of-Days Video