. Two months ago, I began a post called Yesterday’s Anger. As part of that article, I uploaded a picture of a Haredi man who did a despicable thing – he is guilty of sinat chinam (which is translated as “baseless hatred”).

There are those who condemn the Haredi (ultra-Orthodox) community for all manner of things – of not serving this land, of not paying taxes, or whatever. I know that the vast majority do pay taxes and there are many who do serve in the army and in other ways. Amazing organizations have been founded by members of the Haredi community – Ezer Mizion, ZAKA, and many other organizations which help millions of Israelis regardless of their religion or level of observance. I know that Israel is blessed to have most of these communities and organizations here while still being cursed by a small minority.

I also know that when you come face-to-face with that small minority and see how little they value the concept of “Ahavat Yisrael” (love of Israel), it is so easy to incorrectly blame all those who “look” the same, who “dress” the same.

The article that I wrote two months ago featured the picture of a man who knocked down tables at the ceremony celebrating the birth of a child to the Salomon family. The child was born one day before tragedy struck his family. In one horrible day, this newborn baby lost his grandfather, his uncle, and his aunt. His parents were saved from the massacre because of the miracle of his birth. Just a week after these murders in Neve Tsuf, hundreds of people accepted an invitation to attend this celebration. Through the tears, his parents gave him the name they had thought of months before…and a name they never expected – that of his grandfather.

I didn’t post the article and so the picture of this man was never publicized.because I thought that even if that man who came to desecrate this ceremony didn’t have the decency to be ashamed, I was ashamed enough on his behalf. But when I saw his picture on Israel Blogger, I realized I had to set the story straight.

In Judaism there are many important concepts. Here are a few.

First, you should do your best never to publicly shame another. And so I held back until another blogger used the picture in an article titled “Drafting the Jews“, which addresses the draft issue. Ironically, she accuses those who call for drafting Haredi men as all Israeli men are drafted at the age of 18-19 years old, as practicing “sinat chinam” and because we try to have pictures associated with each article we post, she picked a picture from the gallery without knowing that the picture defeats the article. This man is a symbol of the exact opposite of what the author was trying to say. And so we come to another concept – that of pure evil.

If anyone should be accused of baseless hatred, it is the man in the picture. The second Jewish concept that is relevant here is the idea that we are all responsible, one for the other.. What that means is that we are all commanded to help others. That might mean donating to charity, it might mean helping someone cross the street. Perhaps it is attending a happy ceremony to comfort those who have suffered a horrible tragedy. It might mean answering “amen” and standing outside in the sun just so that a family knows they are not alone. And it means standing up to terrible wrongs. What that man did was come to attack those who came to perform this important mitzvah (commandment). In the picture, you can see the police escort him away.

One more concept: There is a commandment that we were given thousands of years ago. Remember, we are commanded, remember what Amalek did to you. Each year, we read the Torah portion that reminds us what Amalek did and we are told to remember.

What did Amalek do? The simple answer is that he and his army attacked the people of Israel as they left Egypt. God didn’t command Israel to destroy Amalek, to obliterate him and his people from this world. Not only because he attacked us – many attacked us in the 40 years we wandered through the desert. No, what Amalek did was to intentionally attack from the rear because he wanted to target the weak – and that’s what this man did. This man didn’t go to just any ceremony – he chose this one… 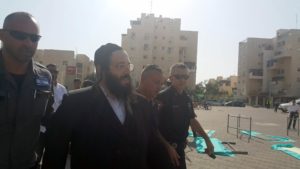 He was clearly annoyed that this family dared to come to the city where he lived, but more, it was because he didn’t like their lifestyle, their level of observance. He attacked the weak, those who were suffering and desperately needed comfort. Though I know that selecting to use a picture of this man in an article about the Haredi community and the draft was done unintentionally, it was, nonetheless, a very appropriate way to point out the complexity of the situation.

This man, this criminal should have been arrested. This Amalek who attacked a family that had just experienced a horrendous tragedy, symbolizes the worst of the Haredi community. I believe with all my heart that he is part of a small minority,  but he is still a cancer that needs to be beaten back. My esteemed colleague is a deeply religious woman who loves to quote Torah – and correctly points out that we have so much to learn from it. And yet…

In the book of Devarim (Deuteronomy), we are given another commandment. The reading begins with “WHEN you go to war. It does not say “if you go to war.”Nor does it say “when you fail to avoid the draft”. When you go to war…because God knows that the Jewish people will go to war. Again and again, we have been required to fight for our land, our way of life. The war is one that we all fight and it is wrong to avoid serving God and the people of Israel. More, it is wrong to think that the learning of Haredi men means more than the learning of the non-Haredi men. Worse, to consider even for a moment, that their lives are worth more or are more important.

I do not care how they serve, but serve they must. If not in the army, than in Sherut Leumi. When you absolve their obligation to defend Israel or at least serve the nation, you get selfish and evil people. People  like this man who cares nothing for Am Yisrael (the people of Israel).

There can be no better example of why the draft should move forward than this man. He should be forced to serve the State of Israel. Instead, he feels free to use the buses we support, the roads we pave. He uses the electricity we generate, the water that we channel to his home. Let him serve for the privilege of living here. Again, I do not care how they serve – it can be in hospitals, sweeping floors and washing windows. It can be in schools helping children learn to read. It can be in cemeteries digging graves and burying the dead with honor and respect.

Draft the Jews…all – to serve in the army or some other national service – fairly, equally, justly. And, punish those who, like this man, dare to attack the weak. It is wrong to suggest that they are somehow more righteous while ignoring God’s law to protect His people.