Hillel lived two thousand years ago and yet, his words and his stance on many legal issues in Judaism remain. He and Shammai, another scholar, often debated issues. For the most part, Shammai was the legalist, Hillel the humanist. But not completely and probably not according to today’s standards.

One of Hillel’s most famous statements is: “If I am not for myself, who is for me? And being only for myself, what am I? And if not now, when?” In a sense, as many are quick to tell you, this sums of Israel, Torah, and Judaism all in one. 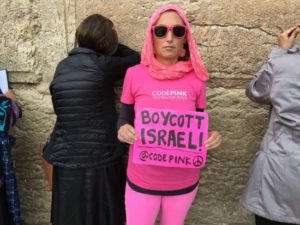 Ariel Gold believes in boycotting Israel. After a post exposing her anti-Israel stance on IsraellyCool, she deleted the offensive posts that clearly showed her political leanings. Coward that she is.

Now, while calling for a boycott of Israel, she’s annoyed – that Israel boycotted her back. Add hypocrite and immature to the list of her personality traits. 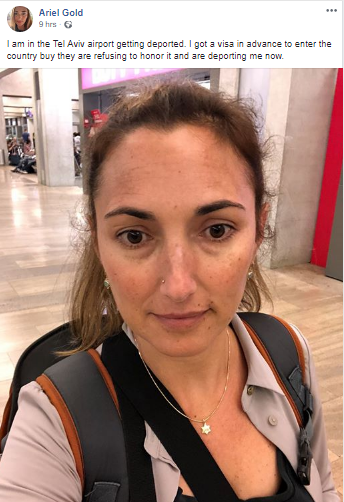 Explaining the decision to deport her, Minister Gilad Erdan wrote, “We prevented Ariel Gold, an extreme boycott activist, from entering the country. Our policy is clear: Those who campaign towards boycotting Israel and come here in order to cause harm—won’t be allowed to enter the country. The rules have changed, and Israel will not show restraint towards those who try to hurt it.”

This is straight from Hillel – a voice from 2,000 years ago warning Israel that we must take care of ourselves, even as we take care of others.

Of course, knowing that she would be deported, because what nation in their right mind would give her admittance (other than Iran, Syria, etc.?), Gold was ready with her camera, her Facebook account, and her fake outrage, “I am in the Tel Aviv airport getting deported. I got a visa in advance to enter the country buy [sic] they are refusing to honor it and are deporting me now.”

If I am not for myself, who is for me?

Having flown all this way to enter my beautiful and moral country while it is under attack and over 7,000 acres of land have been destroyed by her pals, I wanted to share a parting message with Ariel Gold – as an Israeli, as a Jew. As a mother and a wife and a woman. And here it is….

I’m so proud of Israel for refusing you (Ariel Gold) and your hatred from entering our beautiful land. And the fact that this pisses you off…icing on the cake.

Hillel – today, I hope we made you proud.