It’s late August in Israel. Already, many of our children have returned to school, some are still getting ready. Israel is getting ready for the holidays and a return to “normal” after two months of what we here in Israel call the “hofesh ha’gadol” – the “great vacation.” Everything is new and fresh – new backpacks, new books. A new school year…isn’t it all grand and exciting. My youngest daughter finished high school in June and this year, she starts her national service. So proud of her. One grandson started second grade last week; his young brother enters nursery school today. So exciting!

Less than two weeks to Rosh Hashana – our new year! We’ve finished our vacations; had our sun and fun and we’re all ready to move on to the next year. Right? Back to business, new challenges. It’s all so fresh and new, like the empty notebooks we’ve placed in our children’s backpacks. Right? Summer’s over and Israel is looking forward…well, aren’t we?

But wait…is the summer really over? That simple? Move on to the next adventure and forget the summer of 2018? Not quite, not possible for nearly one million Israelis who remain where they were all summer. The balloons are still being launched against Israel. This summer, Gaza fired over TWO HUNDRED rockets at us. They burned more than 40,000 DUNAMS of land and…the fires are STILL burning.

Last week, I took my youngest child on a mini-vacation – just the two of us. As I drove to the gas station, I saw a balloon floating in the air. Normal people would thing, “oh, that poor child lost his/her balloon.” In Israel, the heart races just a bit. Instead of turning right to enter the gas station, I drove forward and made a left. Careful to drive on the road and not off it, I kept looking at the floating balloon, and more, at the string dangling from it. Should I call the police? We live on the eastern edge of Jerusalem – there’s literally no way that a balloon from Gaza could have traveled over 80 kilometers without someone stopping it.

And yet, there was a balloon attack in southern Jerusalem (assumed to have been launched not from Gaza but from one of the Arab villages south of the city) and one balloon did get as far as Beit Shemesh (in the center of the country). If it was an explosive balloon, did it really matter at that moment where it came from? I slowed the car and took a picture of the balloon. It was a large, silver number 3 with a string dangling down as it floated towards the city. Nothing was on the end of the string. No bomb. No flame. No liquid waiting to be ignited upon impact. 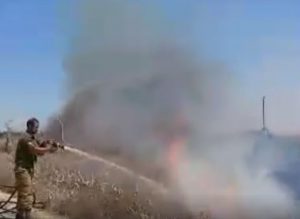 This is the gift of the summer for most Israelis, certainly those in the south. One eye to the sky in fear of what may come from Gaza. “My” balloon was harmless and somewhere, an embarrassed father is explaining to his very upset 3 year old why the balloon flew away. But yesterday, there were at least five more fires in Israel’s south; more land damaged and burned.

The summer’s war hasn’t ended, even if we are going back to work and school. The damage continues. The fires are STILL burning and our land is STILL under attack. We may not have had the war we expected after the rockets slammed into the ground, but we are very much still a nation at war.