Every people has a history – the only real question is how far back it goes and what is in it. The Palestinians would have you believe that they are the predecessors of all. It’s a matter of pride. In their twisted and desperate attempt to create a history of magnificent proportions, they find they are sadly lacking.

What can they do? The earth doesn’t lie even if they do and so they…acquire…yes…they acquire an ancient history. Suddenly, Jesus was a Palestinian and they have Palestinian bones that date back one million years (um…no, they don’t).

Here is an ancient coin (circa 1927) that “proves” Palestinian history because of the Arabic and the word “Palestine”.

And here is an ancient Jewish coin that dates back to the Roman period over 2,000 years ago on which the name of our land, “Judea” is inscribed.

Then there are bottles. Here’s an ancient Jewish relic that dates back to the Byzantine era (about 1700 years ago). Note the menorah engraved on the side?

One point for the Jews on the coin battle.

What other ancient things do people often find? Bottles, jugs, etc. So I went searching again. Thank you, Dr. Google. 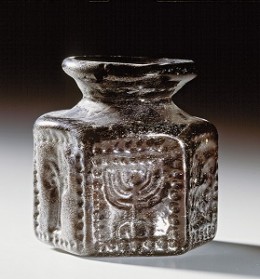 Finding an ancient Palestinian bottle was a bit of a challenge. The first one I found dated back to about 2,000 BCE and came, according to BBC’s webpage, from “Jericho, Palestine” – of course, there was no Palestine in the year 2,000 BCE so that’s quite interesting. What there was, were the Canaanites, who were the sons of Ham and Noah.

The Jews and Arabs came through the son of Noah, Shem – thus we are all called “Semites” (but we get the anti-Semitism all to ourselves). So, to say that a Canaanite jug is Palestinian is too far a stretch to be considered acceptable (except by BBC, of course). 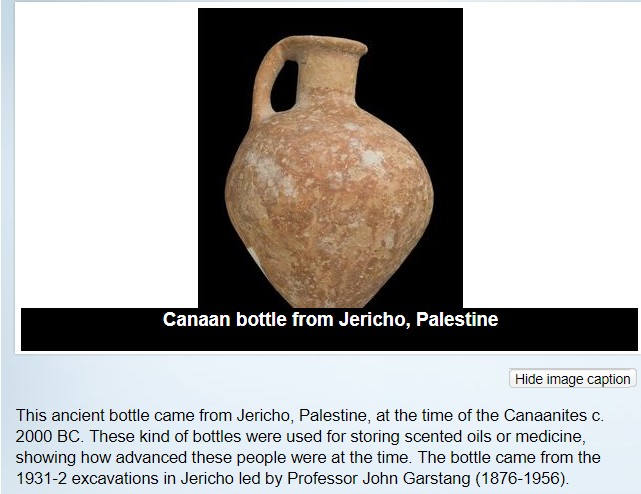 And so it was back to the search to try to come up with a Palestinian bottle. I did find this one. There are two problems with it. The first is that it isn’t a bottle and the second is the even though it says “Pepsi” in Arabic, I don’t think it’s the real thing. 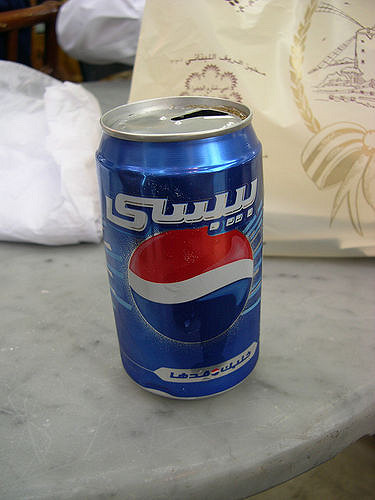 Overall score for proving our historical presence in the Jewish homeland – 2-0.

And then, there’s the history of suffering, of massacres and atrocities.

I came across this picture showing more of the Palestinian narrative. This is a horrible picture of a massacre perpetrated by Jews against the poor Arab population of Deir Yassin in 1948, prior to the establishment of the State of Israel. Re-establishment, I should say. 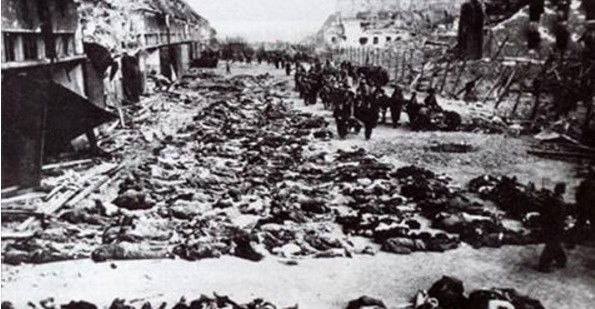 There are just a few problems with this sad, tragic, horrible picture.

The first are the people walking on the right side of the image. They are American soldiers, not Israelis.

The second is the location of the image. It wasn’t actually taken in the tiny village of Deir Yassin. What we know is that attacks were being launched against Jews from the small village. We know that the attackers fled the village at night, unbeknownst to the Irgun. What exactly happened – what is truth and what is exaggeration or outright lies – is too complicated to explore here but what is clear is what didn’t happen.

What didn’t happen was – American soldiers didn’t walk by and view hundreds of dead bodies, as you see in this picture. Speaking of this picture that the Arabs claim happened in Deir Yassin…it’s a fraud. Well, the picture at least is real, but it was taken on April 17, 1945 in Germany. It is on exhibit in the US Holocaust Museum and the bodies that are visible are Jews murdered by the Nazis guards as the American soldiers stormed into the camp. The real picture can be seen in the US Holocaust Museum and viewed online here.

In our little game of scoring, that makes the score 3-0 in favor of Jewish authenticity and longevity in this land.

But this isn’t a game, is it? People are dying because the Palestinians refuse to look forward or backwards. Backwards tells them that we are the legitimate heirs to our homeland and though we have made it clear that we are prepared to live with them, despite very clear historical evidence that if you dig in the ground, it is our history you will find, not theirs (except for old Coca-Cola and Pepsi bottles circa 2010 left to rot).

The Palestinian narrative dating back anything more than 100 years is, without question, fabricated. Even in the last 100 years, much of it is established by using other people’s images. That they live here now is something we all have to accept. When the Jews first moved into the land of Canaan, there were others who lived here. Those that were prepared to live with us nearly 4,000 years ago, remained. Those who were not, were defeated. It was the way of the world then and not something we have to answer for now. We were exiled 2,000 years ago and we have come home. The land offers its testimony on a regular basis that this land is our home.

Stealing images of the Holocaust just makes you look pathetic. Borrowing images from war-torn Syria, as they often do, just makes them look desperate. In days filled with violence, it is clear that the Palestinians have yet to learn that the way to a peaceful solution will not be found through violence or forgery.

We grow tired of your violence and your childish attempts to maintain the status quo when it suits you and demand it change when it doesn’t.

No, you will never rule this land – but then again, history shows that you never did. You rule in something like 40 other lands in this world. It won’t happen here. Accept it…or leave. Deal with it…or lose.