The Jewish Community of Hebron Responds to Reprehensible UNESCO Vote

Today at a gathering in Krakow, Poland, UNESCO, the UN agency tasked with designating world heritage sites,   voted to list the Tomb of Patriarchs in Hebron as a World Heritage Site in Danger located in the “State of Palestine”. Clearly, this was yet another politicized, anti-Israel maneuver manufactured by the Palestinian Authority and it’s purpose is clear: to delegitimize the ancient Jewish presence in Hebron in particular, and thereby, undermine the historical ties of Jewish people to the land of Israel in general.

The Cave of the Patriarchs is a fundamental pillar of Jewish history. The founders of the Abrahamic faiths are buried there including “Jacob” who was the first “Israel”. The monumental structure which was built atop the cave and still stands today, was constructed by Jews 2,000 years ago. The Jewish community existed there fifteen hundred years before the advent of Islam. As opposed to the period of the Islamic conquest when Jews and non-Muslims were barred from the Tomb of the Patriarchs, today, under Israeli sovereignty, there is freedom of worship, freedom of access, and security, for all religions at the Tomb of the Patriarchs. 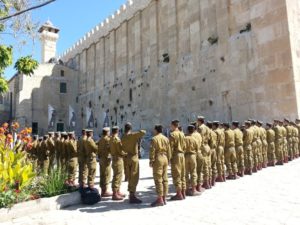 Indeed, only today did Hebron Deputy Mayor Yousef al Jabari declare: “We will do everything we can [for] this place to remain a pure mosque, and a mosque for Muslim worshipers only.” [Jerusalem Post, July 7, 2017]

We call upon the government of Israel to issue an appropriate answer to this reprehensible decision: to immediately suspend all payments to UNESCO and transfer those very same funds for projects that will strengthen Jewish Hebron. These include the resumption of the Israeli Ministry of Education’s trips for students to the Tomb of Patriarchs and strengthening of tourism infrastructure to the site. Most importantly, nothing says that Hebron is Jewish more than Jewish people living in Hebron. Therefore, we call upon the relevant Israelis bureaucracies to unfreeze Jewish building in Hebron and enhance Israeli presence there.

We also call on the international community to recognize the manipulation to which bodies like UNESCO are being subjected. We urge countries to follow in the footsteps of the United States and cut off funding to the prejudiced and discredited agency. Ambassador Haley has emphatically stated  “that the United States is determined to stand up to the UN’s anti-Israel bias” and therefore we also suggest that the US leave UNESCO completely, and thus send the UN a clear message that such blatant fake-history and anti-Israelism will not be tolerated.