We write to you as long time Airbnb “super hosts” and guests. We have always greatly enjoyed working with Airbnb, both as hosts and guests. But after your blatantly antisemitic and discriminatory decision to delist only Jewish homes in the disputed territories in Judea and Samaria, we are afraid that we will no longer be able to work with Airbnb, particularly since Airbnb’s action are not only a craven capitulation to the evil despotic and antisemitic forces that throughout history have sought to boycott Jews and Jewish businesses, but also a blatant violation of Airbnb’s own written policies. 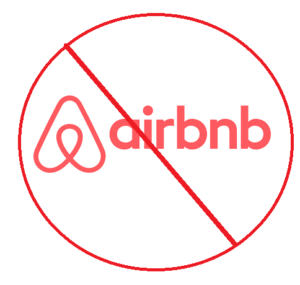 Airbnb’s website claims “Discrimination has no place on our platform.”  But, discrimination now plainly has a major place on Airbnb’s platform, if one happens to be a Jew living or renting a home in the Jewish people’s indigenous, historical and religious homeland, in Judea and Samaria.

Dr. Michael Oren, Israel’s former ambassador to the USA, characterized it best when he tweeted: “Airbnb blacklists Jewish apartments in Judea and Samaria— not Palestinian apartments, not apartments in Turkish occupied Cyprus, in Moroccan occupied Sahara, not in Tibet or the Crimea.  Airbnb’s policy is the very definition of anti-Semitism.  No one should use its services.”

Airbnb’s defense of its discriminatory decision – the assertion that Airbnb is delisting the Jewish homes because Airbnb has adopted a new “Disputed Regions” policy, does not remotely pass the laugh test, let alone a test of good faith.

There are literally numerous “disputed regions” in the world – Cyprus, Tibet, Taiwan, Crimea, Western Sahara and dozens more (see, Wikipedia’s long list of disputed territories). Yet, none of them have been affected by Airbnb’s ostensible new “policy.”  Airbnb is literally singling out only Jews and Jewish communities and homes for this discriminatory and punitive treatment, all while Airbnb ignores the fact that Israeli Jews cannot rent from Airbnb hosts in over 20 Arab countries. It is the height of antisemitism.

In addition to Airbnb having no apparent issue working with non-Jews living in and renting their homes and apartments in literally dozens of “disputed territories” outside of the Jewish people’s historic, religious and indigenous homeland, Airbnb also has no apparent issue working in and with some of the most evil and despotic dictatorships on earth, all while they engage in punitive actions against Jews for simply living in Judea and Samaria.

Treating Israel and Jews living in Judea and Samaria as if they are the only party with responsibility for why there isn’t a peace deal between Israel and the Palestinian Arabs’ (corrupt and dictatorial) leaders, all while ignoring tyranny, oppression, and egregious human rights violations throughout the world (and even by Arabs against other Arabs, including Palestinian Arabs), is the hallmark of the antisemitic boycott campaign against Israel. It is deplorable that Airbnb has decided to join forces with such an evil campaign.

In addition to being blatantly antisemitic, this boycott campaign does not serve the cause of peace. It only hinders peace and immorally serves the cause of hate.

First off, the boycott campaign against Israel (also known as BDS) immorally and incorrectly imposes the entire blame for the absence of peace on Israel. It fails to acknowledge that on at least three occasions since 1993 Israel has offered up a peace deal that would have created the FIRST EVER independent Arab state west of the Jordan River – in this “disputed region” and on all three occasions, the corrupt and tyrannical Palestinian Arab leadership refused to accept these offers and could not even be bothered to make a counteroffer. Yet, there has never been a call to boycott these despots or their respective terrorist enterprises for perpetually saying “no” to every peace deal offered to them.

Second, the antisemitic BDS campaign – which Airbnb is now an immoral participant in – hinders peace because it encourages the Palestinian Arabs’ leadership to continue to reject all compromises and solutions to the conflict that do not involve the annihilation of the one Jewish State in the world. It also encourages all of those who are outside of the region, but also hate the idea of Jewish sovereignty anywhere in the land of Israel, to continue to support – both politically and financially – the continued rejectionist and absolutist mentality that has dominated the Arab-Israeli conflict for decades and made a genuine peace deal impossible.

The main obstacle to peace between Israel and its neighbors — as demonstrated by Arab League secretary-general Azzam Pasha’s warning in 1948 (right before 7 Arab armies attacked Israel): “If the Zionists dare establish a state, the massacres we would unleash will dwarf anything which Genghis Khan and Hitler perpetrated,” as we all as by the Arab League’s famous “three No’s” in Khartoum, Sudan in 1967 (“No peace with Israel, no negotiations with Israel, no recognition of Israel.”) — has always been the despotic Arab countries belief that if they simply reject all efforts to make peace with, or even “normalize” relations with Israel, then eventually they will destroy Israel.

Encouraging the antisemitic BDS campaign does the same thing. It signals to those who want to destroy Israel — which are all of the major promoters of BDS — that they should continue to reject compromise and making the concessions that are necessary to peace, in the (misguided) hope that BDS will somehow dramatically strengthen their hand and dramatically weaken or even destroy Israel.

The antisemitic BDS campaign – which Airbnb is now unfortunately a part of – is also immoral because its leaders will never be satisfied with a peaceful “two state solution.” Its leaders simply do not believe in the right of the Jewish people to have sovereignty, independence and self determination anywhere in the land of Israel. Not in Tel Aviv, Haifa, Jerusalem, let alone in Judea and Samaria. Pre-1967 and post 1967 borders are actually irrelevant to them. The principal leader and founder of the modern BDS campaign, Marwan Barghouti, has repeatedly expressed his opposition to Israel’s right as a Jewish state, within any borders.

To put it bluntly, the BDS campaign, which Airbnb is now a part of, is opposed not only to Jews living in and building homes in Judea but to Israel’s very existence.

The BDS campaign, which Airbnb is now sadly a part of, is also immoral because as famed lawyer and legal scholar Alan Dershowitz puts it, BDS violates the core principle of human rights: namely, “going after the worst first.”

Israel is among most democratic nations in the world. It is certainly the most democratic nation in the Middle East and North Africa. Its Arab citizens enjoy more rights than Arabs anywhere else in the world, including in Tunisia, which for the last 7 years is the only Arab country ranked even as free by Freedom House (though Freedom House recognizes how tenuous this new Tunisian democracy is). Israeli Arabs serve in its Parliament, in its Courts and even on its Supreme Court. An Israeli Arab Supreme Court Justice relatively recently sentenced to jail Israel’s former President (who is Jewish); can anyone imagine the converse happening in an Arab country? Israeli Arabs are free to criticize Israel. T and often do, including in its Parliament (the Knesset). Israeli Arabs enjoy the same free speech, free press and assembly rights as any other Israeli.

Unlike Israel’s neighbors, including the despots running the Palestinian Authority and Hamas, Israel has a superb record on women’s rights, gay rights, and numerous other civil and human rights. It has a free and robust press. Again, among the most free press in the world. And anyone in Israel, even noncitizens of any faith or ethnic background, can seek redress for Israeli government actions in the Israeli court system. That  right does not exist in any Arab country and it also doesn’t exist in numerous other countries throughout the world. Yet Israel is the only country in the world targeted for boycott by the BDS campaign, which Airbnb is now an ignoble participant.

Airbnb is participating in directing a sanction against a state with one of the best human rights records in the world; and it is the only Jewish state in the world (out of literally dozens of official Muslims and Christian countries), all while Airbnb ignores numerous human rights violators through the territories where it operates, as well as numerous other “disputed regions” throughout the world. The antisemitic nature of this action by Airbnb is both plain and horrifying.

As Alan Dershowitz has also made clear, the antisemitic BDS campaign, which Airbnb is now a part of, is also immoral because it encourages a different standard of judgment and response regarding human rights violations. By demanding more of Israel, the world’s only Jewish State, it effectively demands and expects less of other countries, people, cultures and religions, thus inflicting further injury and perpetuating further harm for the victims of egregious human rights violations inflicted by others, including on Palestinian Arabs (who are often tortured by Hamas and the Palestinian Authority, subject to numerous discriminatory laws in Lebanon, and slaughtered in Syria).

Airbnb is now participating in a discriminatory boycott of Jews that is not only immoral, it is harmful to the cause of peace. Change your position or risk not only violating your own anti-discrimination policy, but losing all customers and hosts who understand history and care about morality.