Today on the 9th of  Av, in the holiest site for Jewish People, two Israeli Policemen dragged a Jewish woman from the Temple Mount. I hope that Naftali Bennett’s Jewish Home Party will take that as the signal, the last straw, and say “Bye Bye Bibi.” The Jewish Home must leave the coalition and send Bibi Netanyahu packing.

In Paula Stern’s post, she showed the video and wrote a bit of what happened. I’m totally horrified. 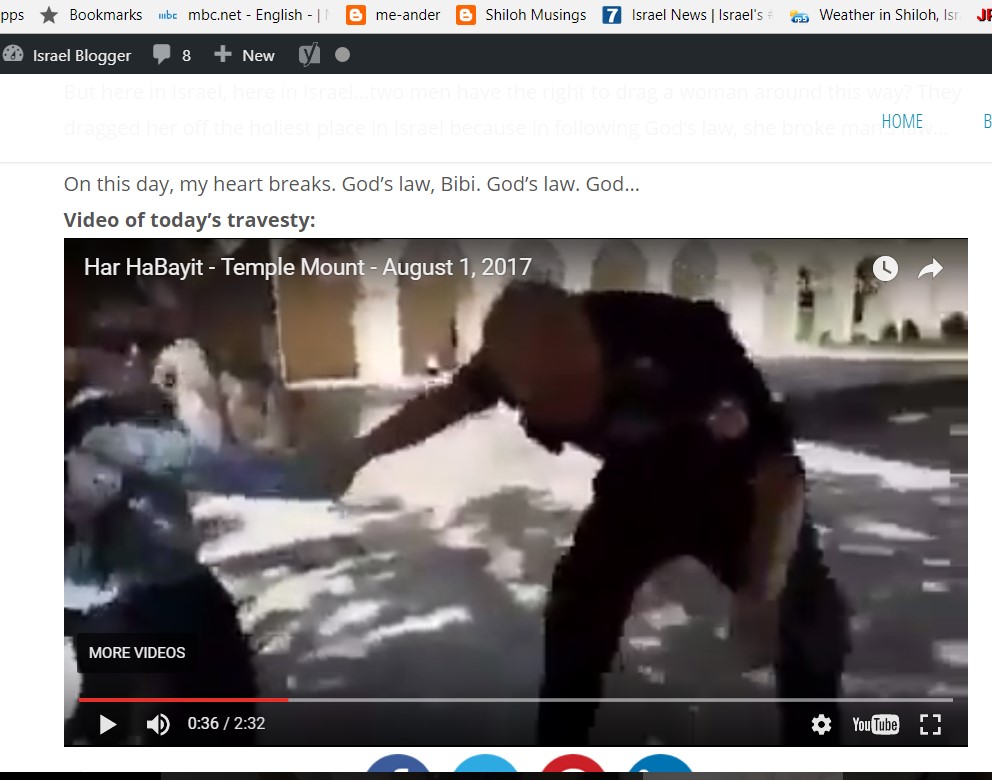 Apparently the woman had bent down to pick up a stone. I’ve ascended the Temple Mount and didn’t know it was illegal. The policemen could have spoken nicely to the woman. Watch the video and see how they are running with her. She couldn’t even keep up.

I don’t know how Naftali Bennett, Ayelet Shaked and the rest of the Jewish Home MKs can stay in the coalition with Bibi any longer.

Enough is enough! The Jewish Home should have said “bye, bye” when Bibi insisted on removing the security at the Arab entrances to the Temple Mount. For whatever reason they didn’t.

In the Israeli Electoral System, one votes for a party, its platform and potential Knesset Members as a package. So it doesn’t matter all that much that Bennett hasn’t done well as “potential prime minister” in the polls. A large portion of Likud voters really agree more with the National Home platform than the Likud policies. And many Likud voters are traditional or religious. One thing that Bennett did when he took over the Jewish Home, formerly National Religious Party was to officially open it to non-observant Jews and anyone who supports their security and other policies. Jewish Home is getting more and more like what the Likud could have been.

Now, after seeing that petite Jewish woman being dragged like a sack of potatoes by those large men, there is no excuse for Bennett to stay in Bibi’s coalition.

I’m ready for elections. I hope they are!