Before my son headed back onto the bus tonight from Beit Sha’an to his base, sporting his new camoflouge beret that he earned from over the past few months in the IDF, I told him something that I only wish my father was here to hear. 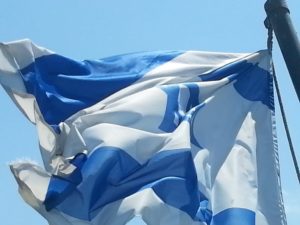 After a HUGE hug, I looked into his eyes and said, “you know what? The last time my Dad wore a uniform like this, he was serving the US Army and was involved in liberating the Belsen Bergen Concentration Camp in Germany back in 1945″.
It’s where my father, an avowed atheist and brought up as an atheist, learned how much he hated religion and GD and would not tolerate anyone who was religious or devout (take my word for it). Now, 72 years later, his grandson and his namesake just participated in the “Tekes Kumta” for the Kfir brigade Duchifat unit, an elite combat unit comprised of top Israeli soldiers. Underneath that cool camouflage beret sits a knit kippa, typical of the dati leumi Israelis.
It might be corny and to quote one of my older sons as “candy-ass”, but damn it to hell and back, I’m enjoy this nachat so much that I don’t even know what to do with myself.
Look on down Dad, whereever you’re hanging around and have a look at your namesake. You have tons to be proud of.
Shana Tova u’mevorechet.
It's only fair to share...