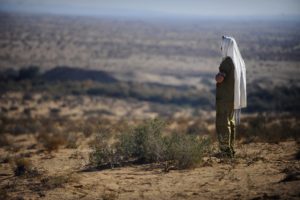 There is another aspect to who we are as Jews that also must come into play. We are a People of faith. We are a People with a knowledge of our Creator, and how He works in this world for His People. Yes, the way things unfold in front of our eyes is indeed maddening. Yet, at the same time, we must understand that we need to rely on Hashem to protect us and enable this “trying time” be handled by Him.

I am not saying He is a Republican or that He belongs to Likud. What I am saying is that those who we select as our leaders are in their position in order to bring about G-d’s plans for this world. I, and many others, may be completely flummoxed by the lack of action of the PM. We may be incredulous as Israel’s government seems to stand down in the face of international pressure, but I still maintain my faith. Faith–that the action or lack thereof is still a part of His will.

You can often translate faith as Emunah. Tzvi Freeman, a senior editor at chabad.org tells us the following about Emunah/Faith:

“Emunah is not based on reason. Reason can never attain the certainty of emunah, since, reasonably speaking, a greater reasoning might always come along and prove your reasons wrong. In this way, emunah is similar to seeing first hand: Reason can help you better understand what you see, but it will have a hard time convincing you that you never saw it. So too, emunah endures even when reason can’t catch up.”

And yet, I am washed over at the same time with a sense of calm. This calm is born of Emunah/Faith that Hashem is truly the One Who neither slumbers nor sleeps. We may cower under our covers at night. We may be screaming at the of our lungs at the lack of action from the government. But, ultimately, we must take into consideration that it is all in the hands of Hashem.

We need to do two things. Protect ourselves as best as possible through the actions of our soldiers (may G-d protect every single one of them!) and through prayer. Prayer to G-d. For ourselves, our families, those who put their lives on the line for all of us. And, for those who live literally on the front lines. And, for our dear beloved Land of Israel.

May Hashem protect us all from our evil enemies. May Hashem vanquish our enemies in front of our very eyes. And please, may Hashem bring an end to those who seek our destruction so that we may usher in the period of the Final Redemption speedily in our days.