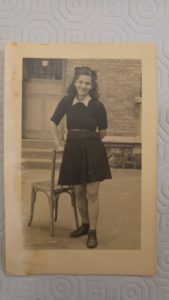 It’s a picture of a young Parisian girl who is roughly 12 or 13 years old.  She is standing by a chair in a schoolyard, wearing a nice dress. She has a lovely smile, light olive complexion and has thick just below the shoulder length brown, curly hair.  On the back is a note was written in beautiful handwriting, “Paulette at school. Sends you her fondest regards.  June 1947”.   Aside from the fact that I know that she is a relative of my mother’s, I’ve had no other information about her at all whatsoever.

Paris, France was home to many Jews of Polish extraction especially post WWI. Before the Jews of Tunisia, Algeria, Egypt, and, Morocco made up the majority of the Jews of France that we know today, before WWII, Yiddish was the common language spoken by Jews throughout France, many of whose families lived there for centuries.

After WWI when my grandmother, uncle, aunt, and great-grandmother were immigrating to New York to meet up with my grandfather, they stayed in Paris with my great uncle Charles and his wife Terese with their children Bernard and Jean.  After roughly one year, my grandmother and her family, including her mother, set sail for Ellis Island in America, settling in with my grandfather and his relatives on New York’s famous Lower East Side, building a family totaling 10 children, most of who now have grandchildren and great-grandchildren. Back in those days, when one left family behind in another country unless they were devoted letter writers, they never had contact with their relatives again.

Before WWII broke out, my aunt Sara was indeed in contact with her relatives in France and in Poland (Lublin). However, there was a point in time where she never heard from her relatives ever again.  They figured that if they survived, they would contact the family. Yet, this never happened, so my grandmother and aunt assumed the worst.  My grandmother was an infirm woman by the mid-1940s. She was widowed young and left with 10 children, 8 of whom lived at home.  The horrific thought of what may have happened to her sister and her extended family was just too much for her to bear.

Thankfully, however, her brother Charles and his immediate family survived and was one of the only Jewish families in Europe that remained intact after WWII.  My mother who worked full time from an early age was able to fly to France to visit this family along with her sister in, around 1953, two years after my grandmother passed away.

Fast forward to my childhood, being that I was born to be a genealogist, I was the one in the family who loved to immerse myself into old family albums and pictures.  I couldn’t get enough of them.  One picture, in particular, was the one I described above. My mother never said much about it. All I knew was that her name was Paulette.  That was that.

Fast forward once again to late last week.  No longer a child, I boast 51 years but people still mistake me for younger and I’m perfectly OK with that.  I was doing some random genealogy research with www.jewishgen.org, which I was told had many improvements within the site and more information.  To cut a long story short, I found the name of a woman who was the daughter of my great-grandparents.  It was Etla Krouchtein. Never in my life have I ever heard of this woman.  After some detective work, I found her name on the same family tree site that I use. Even after more detective work, I found one Paulette Lapidus, the wife of the man who started that family tree.  Luckily she was on Facebook and I found that she was living in Netanya.

Being adventurous, I found her number via Bezek and phoned.  A woman with a very thick French accent answered. I asked her in Hebrew if I could continue to speak with her in Hebrew.  She asked if I spoke English which of course I said, yes.  I introduced myself and stated that I was a genealogist researching the name Krouchtein or Kroghszlengel. She said that she had a grandmother named Etla Krouchtein who was from Lublin, yet moved to France. I then felt my entire body shake and told her that Etla was my grandmother’s sister. “Sacre coure”, she responded.  I told her that I always knew of my great uncle and his family and that they all survived the war, yet I never in my life ever heard of an Etla Krouchtein.

She informed me that her father Avraham Klik was a son of Etla (Krouchtein) Klik.  She then told me that she remembered as a teenager, two girls in their 20s who came to visit from New York.  She remembers that they stayed for a while and with my great uncle. I blurted out, “you know my mother! (of course, I started crying) You met my mother and my aunt”!  Chuckling, she responded warmly, “I guess I did. Yes”.   I asked her if she remembered Marilyn Feigenbaum, and she said: “not really”.  Then I asked her if she remembered Toby Feigenbaum, and she responded, “ahh yes. Toby. I remember a Toby”.

Paulette continued to state that she too had pictures and has had them for many years and wished that I would identify them.  As a lover of old family photos, how could I say no?

Then, the penny dropped.

“Paulette at school. Sends you her fondest regards. June 1947”.  Paulette, I think I may have a picture of you, I said after that epiphany.  As I was speaking to her, I was rummaging through old photos until I finally found it.  I sent it to her via WhatsApp. She responded, “it is me. We will meet soon”. 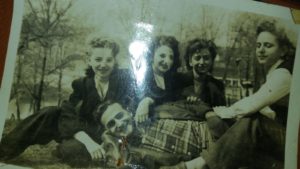 She then sent me the pictures that she was talking about. The one that had me crying non-stop was one of my mother, three of her sisters and her brother, taken in the Bronx between 1945 and 1946.

Additionally, Paulette sent me pictures of my grandmother with my uncle who was in a Navy uniform, another uncle with my aunt and two of my cousins, as well as pictures of my French cousin who I knew as well as his parents.  Two pictures, however, I cannot identify, and I have a feeling that they are relatives who more than likely perished at the Belzec Death Camp like many others from Kamorow in Lublin.

In my twenty-plus years of genealogical research, I only read about things like this in magazines, saw clips like this in the news or nowadays on YouTube, or even in the movies. Never have I ever dreamed that I would experience such a wonderful accident. The mystery behind the picture I have of my cousin Paulette is now solved, opening the doors to a hopeful long-term relationship and answers that I’ve been seeking for decades.

Not only am I very thankful to GD for this, as He is always behind the scenes, but the support I received from a great genealogist by the name of Trisha Wilson, a good friend, neighbor, and mentor, who always lends an ear when asked.  Since only 4 days ago, I’ve added many names to my family tree and began establishing relationships with cousins who I never knew existed who live a mere 15 minutes drive from me.

We will be meeting hopefully this coming Saturday night. Venue and time will be discussed.  This may be a closed chapter that is roughly 70 years old, but a new chapter is beginning, and it began last Thursday morning when I just randomly went onto www.jewishgen.org just to see what was new.