I hesitated in resolving to go to Har Habayit (Temple Mount) and mulled it over for quite some time. I follow the decision of many reputable rabbis who not only permit visiting Har Habayit, but encourage it. Information about where we may and may not step is readily available, as are the laws for the purification rituals one should go through before ascending the mount. That we are allowed to go up to Har Habayit was not in question for me. My hesitation was a personal one.

Perhaps I was being too harsh on myself, but initially, I didn’t think I was worthy of the privilege. My faith in God is strong, though I may not be as meticulous as I could in following every letter of Torah law.  Aware of my inadequacies, I wasn’t convinced that I was pure of soul enough to walk upon the most hallowed place on earth for the Jewish people. The awesomeness of Har Habayit is humbling and one must give it the respect that it commands. In the end, I did go. My soul may need working on, but my heart is pure. More importantly in these times, it is a national imperative. Our presence on the Temple Mount is vital.

The Muslims are robbing the Jewish people of its most sacred place, right from under the nose of our government. In actuality, the Israeli government is enabling this atrocious theft. Indeed, like the rest of the world, the Israeli leadership falls on its knees paralyzed by a panic of violent Muslim retribution should we take a stand for what is the very core of our spiritual existence – the Temple Mount. It is where we believe God has chosen to rest HIS divine spirit. It is sacred ground. And in this Divine Spirit, is the essence to the Torah, and hence the essence of our nation.

Many people refer to Prime Minister Netanyahu as the “status quo” prime minister, as one who doesn’t want to rock the boat, but, chooses instead to avoid war at all costs, even if the cost is the very epicenter of our spirituality as a Jewish nation. Some Jews in Israel are even content with the status quo.

I have a strong feeling, however, that those who are content with the current state of affairs have not gone up to the Temple Mount to experience the “status quo” for themselves. So when I did go up, I took along one such status quonik, and this is what happened:

We decided to go up in the afternoon. Between 1:30 and 2:30. You see, there are specific allotted times for Jews and other “infidels”. We arrived at 1PM at the area of the Mughrabi  bridge, a wooden bridge connecting the Western Wall plaza with the Mughrabi Gate of the Temple Mount, hoping the line wouldn’t be too long due to all the foreign tourists.

As it turned out, the line was quite long, but once it began to move, an Israeli policeman carefully eyeing the crowd approached us and asked if we were Jews. When we said yes, he asked us why we were speaking to the foreign tourists (who were not Jewish) that stood on line behind us. Surprised at such a question, I answered simply that while waiting for the gate to open we just began talking to each other – to pass the time.  The policeman then directed us out of the line, led us through security, and handed our Teudot Zehut, identity papers, to another policeman who studied them scrupulously.

He asked if we had on us any religious items, such as a prayer book, a chamsa, etc., and then told us the “rules”. No praying, no whispering of prayers, no crying, no showing of emotion, no closing of the eyes, no this, no that, no conveying any sign whatsoever that would hint that the Temple Mount was sacred in our hearts. Once all the instructions were out of the way he told us we would have to wait for additional police to come and “escort” us to the Temple Mount. Forty-five minutes crawled by as we watched hundreds of tourists pass us, going up freely and unhindered to OUR sacred place. The police kept us back, stewing in the heat, waiting for the additional police forces to take us in hand as if we were convicts. I couldn’t help but think that all that was missing were metal shackles around our wrists and ankles. 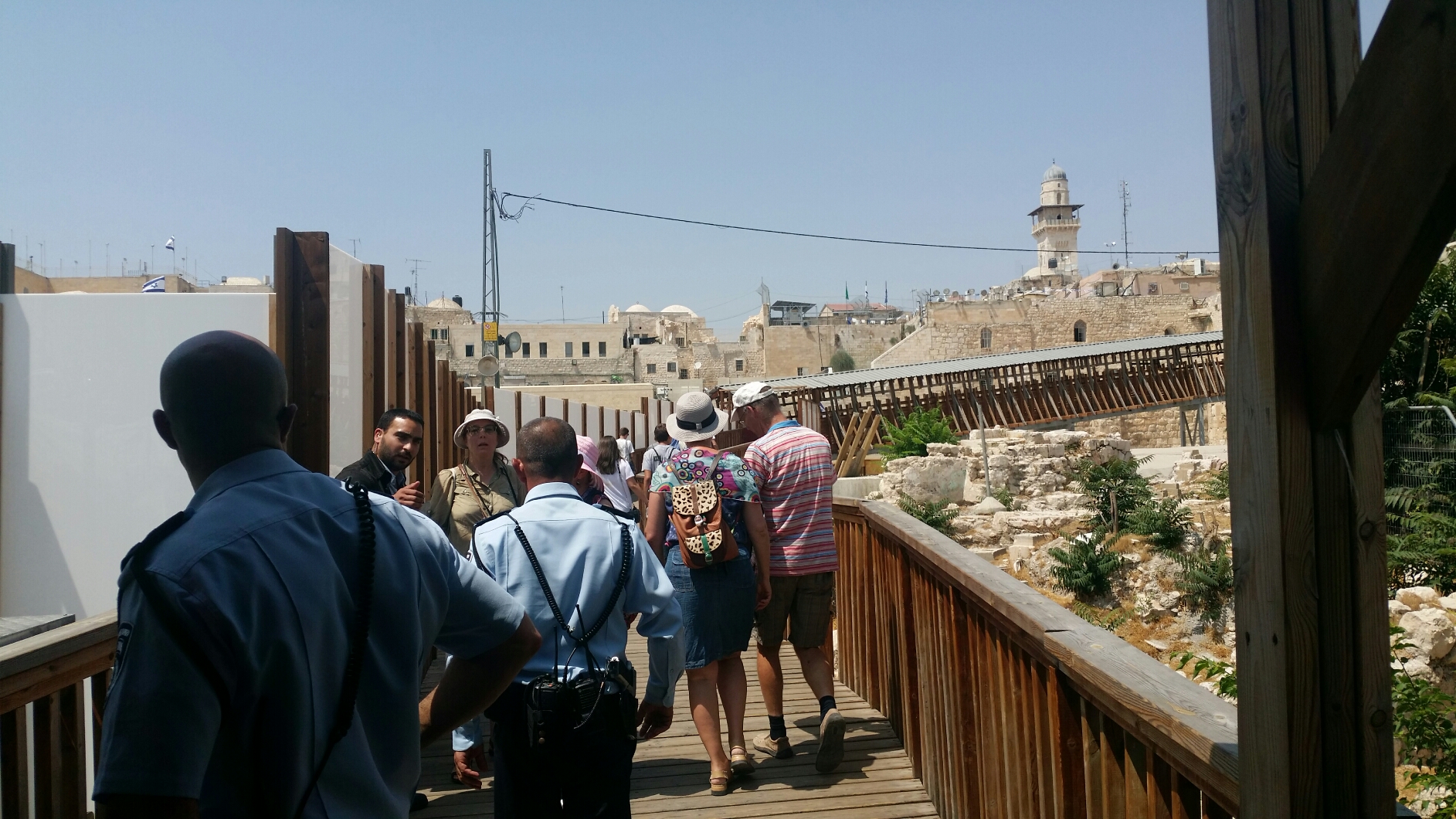 As time passed, I worried that we wouldn’t get to go up at all. The allotted time was just until 2:30 and the minutes crept slowly by, inching closer to the deadline.

Every muscle inside of me tensed in anger, no…make that fury, and it didn’t take me long to reach a boiling point as I was forced to watch a steady flow of people breezing through the Mughrabi bridge – allowed to do so because they weren’t Jews. The person who was with me saw the fire coming out of my eyes and feared I would blow up at the police who were keeping us in the “holding pen.” Trust me, I was close to it.

A few more Jews had joined us in the wait. Finally, 50 minutes later, at 2:20 PM, several policemen came to fetch us. They escorted us over the bridge and onto the Temple Mount. 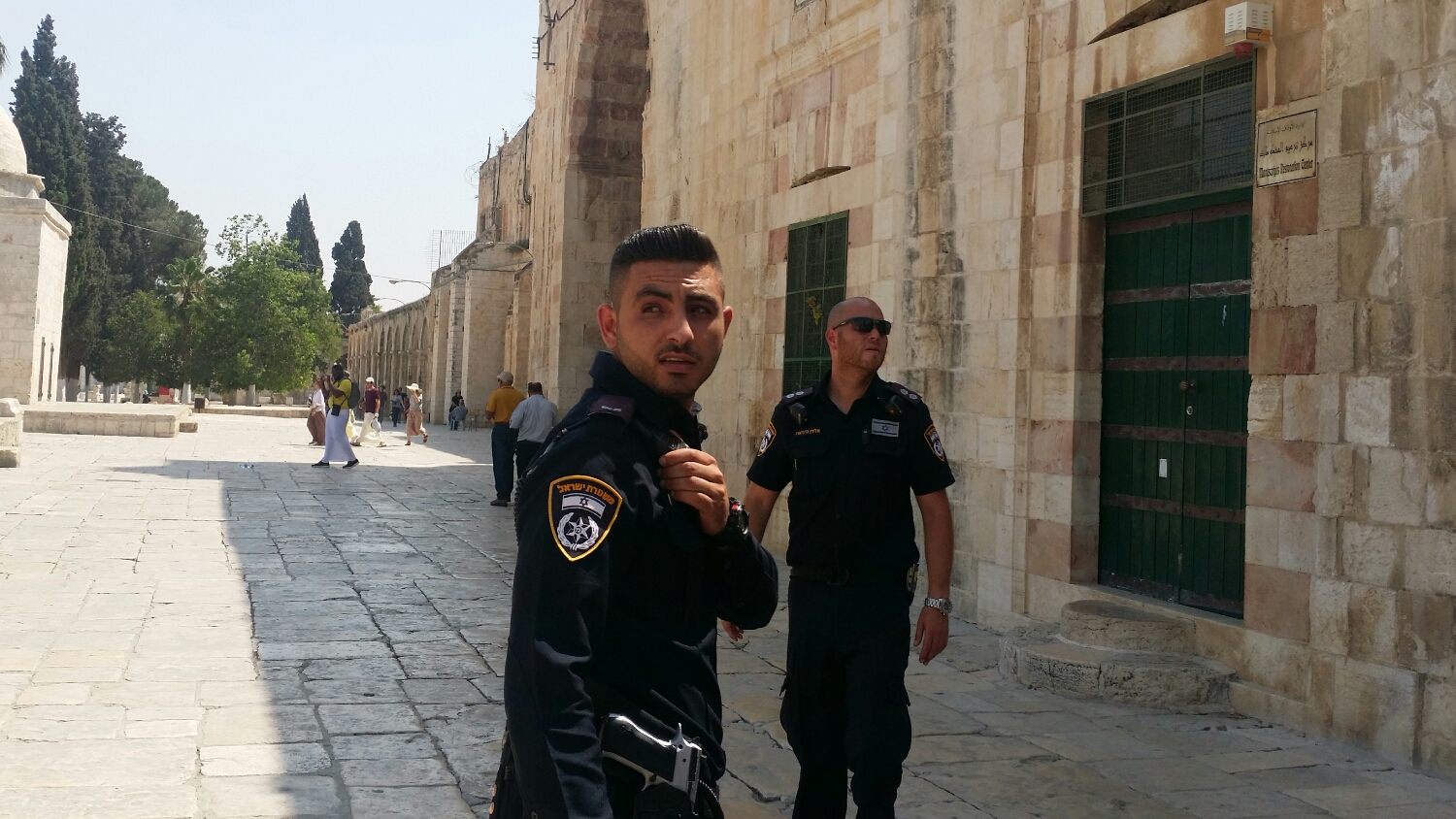 Before getting there, I imagined myself filled with emotion. I imagined feeling the hugeness of actually being on our beloved Har Habayit.

But I didn’t feel anything of the kind. What I did feel was degradation.

It was an experience for me that stifled all spirituality. Hard as I tried to take in the enormity of where I was, it was difficult to hear my own thoughts above the constant barrage of military-like orders of how to “behave” all under the watchful eye of a bulldog-looking Wakf official. 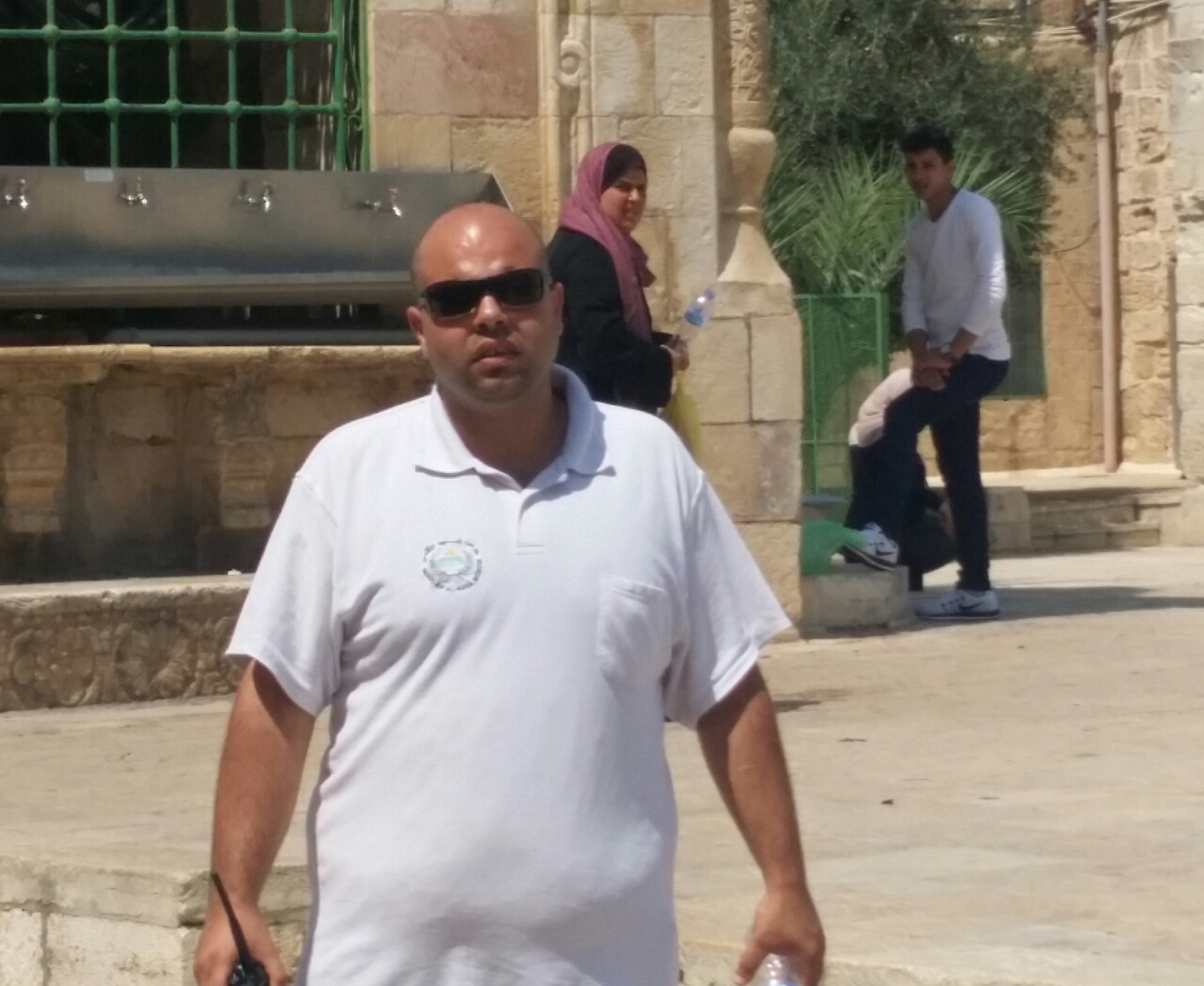 I did manage to silently thank God for the privilege of ascending Har Habayit. I wanted to bask in the historical miracle of it all, but I couldn’t. The police – our Israeli police, treated us as if our presence was nothing less than an annoyance,  and under the order of their superiors, had to remove our “dirty Jewish feet” (quote courtesy of Mahmoud Abbas) from the premises as quickly as possible, so not to cause the Muslims to riot. 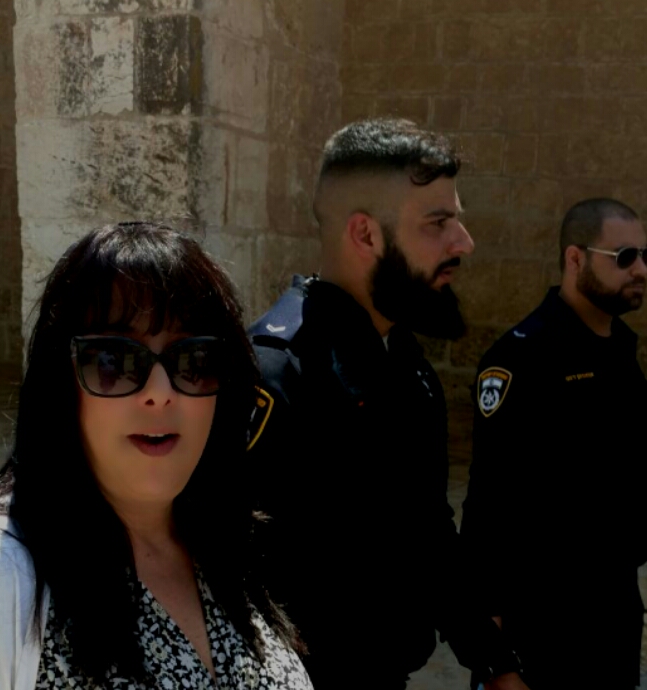 And the “status quonik” who came with me? Well, suffice it to say, he was not all too content with the blatant discriminatory policies against Jews at our most holy site on earth. But with the implicit approval of successive Israeli governments since the reunification of Jerusalem in 1967, a de facto Muslim state under the authority of the Jordanian Wakf exists in the heart of our eternal capital. It is a place where we Jews are treated as dhimmis in our own land.

This is something we must not accept.

Sadly, the real players in the Israeli government who are for the most part spiritually bankrupt, cower at the mere threat of an Arab riot should we have the “audacity” to pray at our most holy site. The government is quick to blink at the first stone thrown by an Islamic terrorist incensed at Jews praying anywhere near the Temple Mount, and shamefully abandons its nation’s heritage, its birthright. My heritage! My birthright!

Yes, Islamic violence is unnerving, daunting and terrifying. Who is still unaware of the rampant, unbridled malevolence that rages from the many echelons of Islam?

Be that as it may, the State of Israel – the nation of Israel, is not without resources.

Why are we cowering?

The Temple Mount is our legacy. It is inseparable from the heart of our people. It is the very bastion of our faith that is 4000 years strong.

Yet, we are giving voice to maniacal, blood-thirsty Jihadists to define limits to our religious worship?  To forbid us to utter a prayer as we stand on hallowed ground? To move our lips?

Are we to continue the pathetic stance of sanctioning the theft of what is rightfully ours?

NO, DAMMIT! We need to get angry. We need to assert our rights. We need to reclaim what is legitimately ours. If we abrogate our rights to the Temple Mount, then what right, pray tell, do we have to the entire Land of Israel?

The Muslims built their Dome of the Rock shrine on top of where our first and second Temple stood. It is they who are the occupiers. It is they who have stolen our most sacred site and propped up their shrine as a symbol of their colonization, appropriating what is ours.

We need to show our current leaders in no uncertain terms that their policies of acquiescence and maintaining the repulsive status quo is absolutely unacceptable. 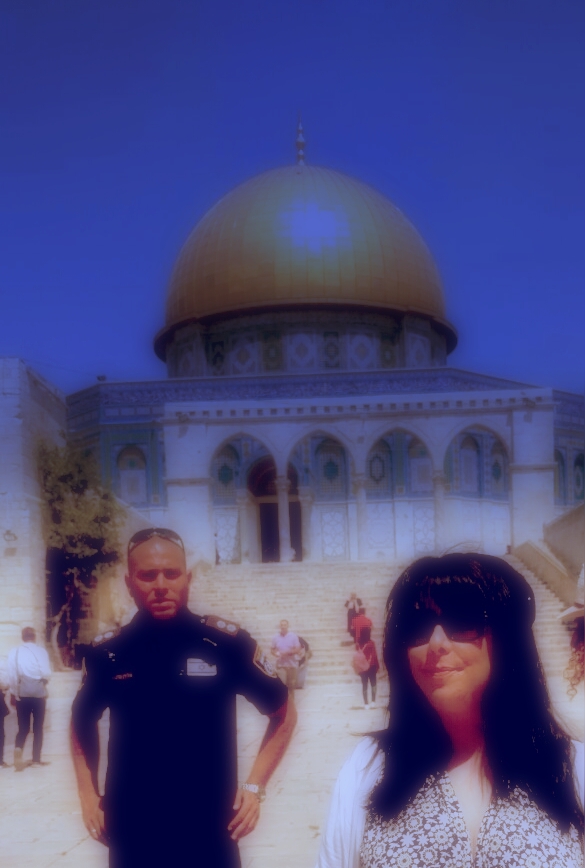 We need to “annoy” our government further and “annoy” our police with a constant presence at the Temple Mount. We need to come in droves. Daily. We are a stiff-necked people, so let’s get stubborn about it. It is our continued presence that will make a difference.

“Every spot on which your foot treads shall be yours”, (Deuteronomy 11:23).

Ultimately, it is up to us.

A member of the tribe of Judah, Zahava was lost for several years in the US Northeast until found a decade ago roaming the hills of Judea in Gush Etzion. A published author of the well received novel, The Gilboa Iris and the non-fiction, Settling For More: From Jersey to Judea, as well as hundreds of articles in many internet news publications, she hopes to one day write the great Israeli novel.
View all posts by Zahava Englard Shapiro →