Yom Hashoah is upon us once again, and yet even as the time between the Holocaust and today stretches further and further apart, the memories of it do not weaken, but strengthen.

Because I’m looking around at this world – this broken world – and I’m seeing things that were supposed to have been banished into dark and hidden corners, but are instead proudly and malevolently on display. Those evil things that were supposed to have drifted away with time, have instead roared back to the surface, bubbling around the rims of a boiling pot and spilling their dark bile over the edges, spreading itself even further.

Sometimes when I look at pictures of my people during this era, I see a hopelessness in their eyes, I see a despair in their souls. I see mothers and fathers and grandparents and children and babies, religious people and secular people, people who might have been liberal and people who might have been conservative, people on the right and on the left and in the centre, those who held onto the past and those who embraced the future.

Perhaps it’s easier to believe it was just the Nazis who did all these things, but the truth is far more complicated. Because the Holocaust did not simply occur because Hitler wanted it. It occurred because all that evil needs to succeed is for good people to do see what’s happening and do nothing. Except many people didn’t simply do nothing. They embraced it. They took part in it. In Paris, the French police rounded up the Jews themselves. In the Ukraine, they beat them up in the streets. In Poland, they chased them with pitchforks, locking them in barns and setting fire to it. And when they tried desperately to escape this hell that surrounded them, the world said no.

A Canadian immigration official, when asked how many Jews would be let into Canada, responded by saying, “None is too many.” In May 1939, a German ship, the St Louis carrying 900 Jewish refugees, was refused entry to Canada, the United States and Cuba, forcing it to return to Europe where hundreds ended up being murdered as the Nazi’s net spread further. The Evian Conference in 1938 brought together 32 different countries in an effort to deal with the Jewish refugees from Nazi occupied Europe. It was convened by President Roosevelt in a bid to divert attention from his own country’s severe restrictive policies that prevented Jews from entering. But, other than expressions of “sympathy,” and the exceptions of the Dominican Republic and Costa Rica who were willing to take in Jews, no country lifted a finger, sealing the fate of the Jews of Europe. 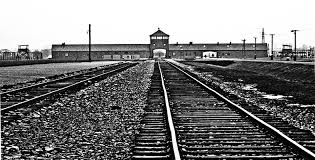 The civilisation of the world was tested that day – and it failed miserably.

So when I think of this era, I think of the unimaginable fear that my fellow Jews felt. I think of the fear that must have constantly stayed with them – every second of every minute of every hour of every day.  Each breath of air was a hard fought struggle. Every scrap of food foraged meant another day alive. Death stalked them relentlessly, never leaving their side. And for 6 million innocents, it ended up claiming them too.

We want to believe this is in the past, but today Jews once again live in fear in many of those very same places – and in new places as well. The security blanket of democracy and human rights has proven to be an illusion, as once again, despite their minuscule number, Jews are the highest target of hate crimes the world over.

And yet this is not our darkest era at all, because our Jewish sovereignty has been restored in the land of Israel and Jews will never again have to depend on apathetic conferences that express “sympathy” and little else. The cries of my people will no longer be ignored.

The Nazis and their allies stole the future of so many Jews, and yet they never succeeded in stealing the future of the Jewish people themselves. They failed, just as the Romans and the Egyptians and a hundred other enemies had failed before.

We are a people that embrace life, not death. And a people who do that, can never be destroyed.