On May 16th, a group of approximately 50 British “with a variety of political beliefs – gathered in Parliament Square to mourn the deaths of the Palestinians killed by the Israeli army.” (See I’m proud to have led Kaddish by the leader.)

Currently, Leah Jordan serves as the Progressive Chaplain for Students for Liberal Judaism. As such, she attended in her role as a “rabbi.” Then, she and her fellow travelers felt that a tremendous injustice was served. More, they believe that the IDF likely performed criminal activities against Gazans who “protested” at the border.

What she did was to lead these fifty misguided individuals in the recitation of Kaddish. Really, the same Kaddish that is said for those who went to the gas chambers. Even the same Kaddish said for the most pious and the most simple Jew after they have left this world. Yes, the Kaddish in which we “sanctify and magnify” the great Name of God.

Imagine, Jordan chose to recite these holy words over …. dead terrorists! Even Hamas themselves declared that the vast majority of those who were killed by Israeli troops were members of the terror organization. And, I remind you that the Charter of Hamas calls for the destruction of Israel. Clearly, they would as soon put a bullet in the head of an Israeli as they would of Jordan, merely for the crime of being Jewish. 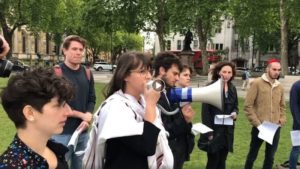 And there she stood. There, in broad daylight. Then, she proceeded to recite these holy words over the very same people that would, if given the opportunity, destroy the country she claims she loves. Unbelievably, she recited Kaddish over the people who have blown themselves up to murder Jewish babies. Remember, these are terrorists who infiltrated Jewish communities and slaughtered families in their sleep, and so on. Yes, it is for these people she recited Kaddish.

And now, in the ultimate sign of chutzpa, she plans to visit Israel. No matter what her reasons, logic or goals may be, she should not be allowed entry in to the country. When one praises and invokes the words of kaddish to mourn those who seek its destruction, they are in bed with the terrorists. This conjugal bed of terrorism gives birth to many others who would sympathize with the cause of Hamas, and, as such is prima facie evidence of supporting terror.

No, Leah can stay home in the UK and support terror from there. More, she can do what she wants as it is a free country. Still more, she can choose to visit Jordan or Saudi Arabia or Qatar or any other country she chooses. But just don’t soil our soil with your terrorist-supporting persona…ever.

Sign the Petition Against Those Who Say Kaddish for Our Enemies

If you also believe she should not be permitted to visit, please sign the petition here today!