It’s a modern world, often lived in real time. That means, sadly, that we are often made aware of things as they happen, or seconds after. The shooting attack in Florida is one example. A terror attack in which a family learns that their beloved son has died because the media reported it before the police or security teams could get to the family themselves. It means we know when rockets are launched against Israel from Gaza seconds before impact.

This real time option is made possible by various phone apps that sound an alert each time Arabs fire rockets at Israel. In their first incarnation, these apps often featured the air raid siren as the sound used for the notification. I was on a train once and nearly panicked a lot of people before I was able to quickly apologize (and got a long lecture from an elderly woman about how I had frightened people). As time went on, the apps became more sophisticated. You can now pick the notification sound; you can now set it to alert you when specific regions are targeted.

I changed the sound – no use panicking everyone. While some people specify where they are located, I didn’t change the region. I have always felt that if an Israeli is being attacked somewhere by a rocket, I too am being attacked. If they are awakened in the middle of the night, given seconds to run to a bomb shelter, then I too should be awake. And so, last night, as Israel was attacked several times, my phone beeped. The first time, I was a bit disoriented. It was so dark  and stormy outside. I was awake the second and third time my phone buzzed and each time I watched the screen light up with red pinpoints.

On a screen, these points are frightening. More frightening was thinking about the rockets flying towards their target. Earlier in the day, a home was hit, a community center as well. Hundreds of thousands of people last night ran for shelter; grabbed their sleeping children and rushed them to safety.

Long after the phone stopped beeping, I stayed awake waiting. Waiting for another rocket, waiting for word on casualties.

Waiting because in Gaza they think it acceptable to attack hundreds of thousands of civilians in the middle of the night.

The screens vary from app to app, but here’s an example of what my app looked like last night. 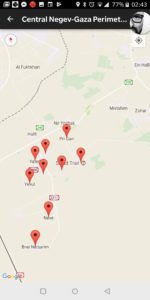 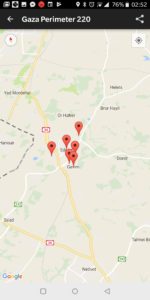 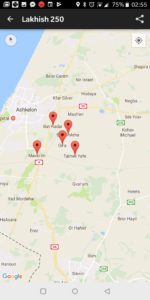