Do you recognize this man? I met him recently as he stood lecturing a group of young tourists from Northern European countries. 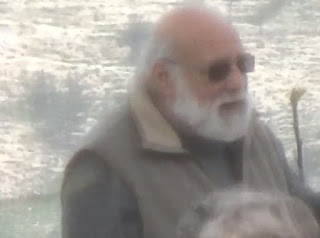 I agreed to speak to them a bit about the beautiful country and city in which I live. I am Israeli and I live in Maale Adumim. Though I don’t believe there were any Jews in the group, the group’s guide is a Jew who lives in Jerusalem and has a long history that is anything but balanced, biased, or rational.

The guide’s name is Jeff Halper. Perhaps you do not recognize his name, his face. But if you are like me, you will quickly realize that he is as ancient as all of our people. He has walked among us almost from the start.

In this life, he is an anthropologist by trade, he takes foreigners on tours around Israel…the parts of Israel he wants them to see, and “educates” them. The stories he tells boggle the mind; they certainly rock the foundations of truth in relation to  Israeli history…Jewish history. The good news is that they bear little resemblance to actual history; the bad news is that he cultivates an audience susceptible to his hatred. His lies fall on open and willing ears and he tells them almost with glee about imagined injustices, evil plots that exist only in his twisted mind. He is the essence of the self-hating Jew that has plagued our people for thousands of years. He is the snake in the Garden. He is a proud leftist who came to live in Israel so that he could dedicate his life to trying to destroy it.

The Palestinians have been here for 2,000 years, he will tell you. In fact, Joshua stole the land from the Palestinians. I stare and wonder if I heard what he said, worse, I wonder how he could say this nonsense with a straight face. He adds to the lie and to his twisted narrative, the Canaanites become Palestinians.

He stumbles for a moment when I ask him what lies under the Dome of the Rock. The Temple, I point out. I challenge him to deny it. If WE are the occupiers, how is it possible that their mosque rests on OUR Temple?

He thinks for a moment – and then falls back on that being 2,000 years ago. Even Nadia Abu El-Haj, an anti-Israel professor at Columbia University, admits in her dissertation that in the year 70 CE, there were Jews and Romans in Jerusalem. No mention of Palestinians…but apparently, we are all wrong and this man knows better.

Israel was the aggressor in 1948, he claims. Another lie. We were invaded by 5 Arab armies while he claims that we attacked them. He says we were in cahoots with Jordan. Really? Talk about rewriting history.

We are the aggressors, he has told the group and as good parrots, they are quick to agree. There would be peace if Israel would just stop occupying. Occupying OUR land? I respond and they shake their heads and look to him, this abomination standing on my land, in my city.

At least they are honest, in their own deceitful way. They don’t lie like others, claiming that they hold the occupation to have begun in 1967. For them, it started in the 1880s, solidified in 1948, and became unbearable in 1967.

In the space of a short meeting – they used all the keywords he has taught them. Occupier, Aggressor, Oppressor. We have victimized them, impoverished them, stolen their land and their water and denied them the opportunity to build (it must have been painful for them to keep their eyes closed going in and out of Jerusalem in order to miss all the legal AND illegal building that the Arabs are doing).

If you mention terrorism, the Fogel massacre and others, they are quick to justify those horrific attacks. Yes, really. If those poor Palestinians living in those mansions we won’t discuss weren’t oppressed…they would have more options. There are huge numbers of Arabs studying in all our universities – quiet, let’s not talk about that. He stands a bit back, letting them fight on the stage he has set.

They mirror his arrogance in thinking that they, of course, know more than someone who lives here. I try again. Poverty-stricken? I mention the Arab that rammed his father’s BMW into my oldest son’s unit years ago. It was quickly discovered that he did it because he was angry that his father and uncle had refused to allow him to marry his cousin. That was a reason to attempt to murder people? No reaction. It wasn’t poverty. B.M.W.!

The Arab that murdered three security guards a few weeks ago his wife, who, it was later discovered, ran off to Jordan with their three children. He didn’t do it for money either. No response from the blind and the deaf.

A female terrorist from Gaza was having an affair with her Hamas operative who threatened to publicly shame her if she didn’t become a suicide bomber. Truth is a lie to those who see the world through the filtered vision of Jeff Halper.

I did try to add some perspective to people who have come to see a world that is black and white (and no shades of truth ). I asked Halper what happened after the boy’s murder – knowing he will never admit the truth. And so I offer them the truth that is easily found, if you dare to try to trust the world of anyone but this leftist. I stated that it was universally condemned in Israel and asked them to compare that to the praise given to Arab terrorists and the handing out of sweets.

The Jew didn’t waste his time denying or even answering. Instead, he returns to calling Israeli leaders criminals seeking to deflect. His faithful students rush to justify terrorism as he mentions a corrupt politician, a former president sitting in jail for sexual assault. The connection? There is none. It is only to make sure he plants a negative picture of Israel.

What becomes clear as I speak and they counter is that they are mouthing the words of the left, speaking in front of their instructor, currying his favor. It is the Jews who are wrong; Israel at fault. Our greatest crime started long before the creation of Israel and honestly has little to do with the so-called 1967 “occupation”.

Mistake after mistake pours across out – historical inaccuracies and carefully selected omissions.

Only later to I learn that this man who guides these tourists helped organize and support the first flotilla. And in that moment, sitting at my desk once again, do I realize that this has become personal. In this life, I am pitted against Halper. It is my son’s honor that Halper seeks to besmirch; it is the honor and existence of the State of Israel that Halper seeks to erase.

My oldest son fought in that war, risked his life, while this creature of deceit pretended he cared about bringing humanitarian aid to Gaza. I wish I had known about him before, though I do confess that I began to suspect.

But I have a message for Jeff Halper and I hope somehow he receives it. It isn’t about Gaza; it isn’t even really about Israel. I recognized Halper, though it took a moment or so for me to properly identify him.

Oh, not by name. In this life, his name, Jeff Halper, is as meaningless as the dust of the earth. Yemach shemo, is one of Hebrew’s most eloquent curses. It means, “May his name be erased.” Different cultures have different curses; this is ours and I offer it to Halper.

I recognize you, Jeff Halper. I see you. I hear you, but above all, I know you. You are among those who were so quick to sell our people, betray them, generation after generation and in foreign land to foreign land.

I know you, Jeff Halper. When we first came back to this land after being slaves in Egypt thousands of years ago, you were one of the spies who lied about the land. It is indeed beautiful, you told our people…but you lied and claimed we would be defeated because those who live in the land are giants. You instilled fear rather than hope by twisting the truth to serve your needs. Then…and now.

You were there in the concentration camps, betraying our people and shoveling their bodies into the gas chambers. You took food for yourself while others starved. You stood as the orphan went hungry; you danced as the people mourned the destruction of our land and the exile of our people. In a very real sense, you were a kapo then; you are a traitor now.

While my son was fighting to defend this land; Jeff Halper was working against Israel and Israelis. A spy. A kapo. A traitor. A leftist. A traitor. Throughout our history, such men as Jeff Halper have used and abused their Jewish identities for their own self-destructive ways.

I know this man and I know something else. For all that they try…they have never succeeded. The spies did not stop us – Joshua led us home while they were buried in the wilderness never to reach our land. The kapos did not succeed. They sold their souls to buy their daily bread, but the Jewish people survived even their betrayal.

As I drove away from Jeff Halper, I promised my beautiful city one simple thing. He can tell all the lies that he wants in this generation and all those to come. It doesn’t make a difference because what the Halper’s of our past, our present and our future can never acknowledge is that we will survive them all. For all the battles they wage against us, it is they that become dust, they that are forgotten.

Am Yisrael Chai – the people of Israel are eternal.