Israel has experienced several earthquakes in the last few days. Without question, an earthquake is nothing to ignore or become complacent about.

On a scale of one to catastrophic, our recent earthquakes rate around a 4 (at least according to the Richter scale). In fact, even Richter terms these as “light”. Still, it’s less than comforting to know that an earthquake ranking in the “light” category still has the impact of an “small” atomic bomb (and no, I have no idea what Wikipedia means by a small atomic bomb). 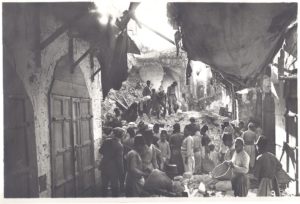 No sooner does an earthquake hit somewhere in the world, somewhere, someone is going to suggest that the earthquake carries greater significance. And maybe sometimes it does. All things are, if you are a person of faith, the intent of God, the hand of God. The problem is not so much the role of God, but the role we assume God will take.

An earthquake in Iran means that God is punishing the Iranians? An earthquake in the north of Israel means God is displeased with…fill in the blank. Maybe, maybe an earthquake is simply the earth shaking under our feet, pressure being released?

For now, we’ll hope that this little series of earthquakes doesn’t lead to a larger one, as happened in 1927. For now, maybe we’ll take the warning that the earth sometimes shakes and it’s best that we don’t presume to assume what God means by each action or reaction of the earth.

On a scale of one to ten, we got off easy. Devastation did not come to our land today and for this we should be grateful. Many scientists say Israel is long overdue for a huge earthquake. We do what we can, build as safely as we can, and we prepare. But more, if there is one good reaction that should come out of these little quakes, it is to remind us that we are human and we all live under the same sky, the same stars.

However evil the government of Iran might be, few Israelis think the Iranian people are evil. Let’s remind ourselves the next time something happens to our enemies, that whatever are the ways of God, the ways of man require us to be more humble.

And as the week ends and the Jewish Sabbath approaches, let’s celebrate where we are, who we are rather than worry about others. Shabbat shalom