In recent years, there’s a summer event for all the family here in Shiloh. Tel Shiloh, one of the most exciting of all the Biblical archeological sites in Israel, invites local residents of all ages to “dig” and “rinse” the ancient finds. Yesterday afternoon, three generations of Shiloh residents worked together as archeologists at Shiloh Hakeduma, Tel Shiloh.

Yesterday afternoon while enjoying the annual opportunity to be an “Archaeologist for the day”  at Shiloh Hakeduma, Tel Shiloh, I got a kick out of the magnificent irony in it all. 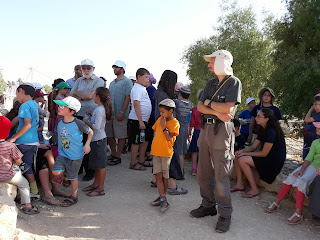 Thirty-nine and a half, 39 1/2 years ago, in the cold wet winter, Shevat, February, 1978, the seven very young families and a few bachelors who were the first Jews to move to Shiloh in thousands of years were labeled “an archeological expedition.” The Prime Minister of the time, Menachem Begin, insisted to American President Jimmy Carter that the people who were in Shiloh were just a group of professional archaeologists who were camping out there while they dug, since traveling was complicated. That’s what Begin had been told, and it made sense to him, so he had no problems telling that story to Carter.

Journalists who came to write about the historic archeological activity in Shiloh saw young mothers hanging laundry. If anyone was “digging,” they were the toddlers playing in the dirt. The truth was quickly revealed that Shiloh was a “settlement” and a town for Jews, like in days of old. Carter was furious!

Yesterday three generations of Shilonians, some from those original seven pioneering families, happily dug for ancient artifacts and rinsed and scrubbed what had already been found.

Professional archeologists and volunteers come from all over the world to work at the Tel Shiloh digs. The Shiloh Hakeduma, Tel Shiloh, archaeological site is officially recognized. Recent discoveries confirm the Biblical narrative. Keeping up with the discoveries is very exciting. And at least once a year we ordinary Shiloh citizens are invited to try our hand as archaeologists, too.

The volunteer dig also included a short tour and explanations of recent discoveries and developments.

We who live in Shiloh are aware that during Biblical times and after, people lived  in this entire area, including nearby mountain tops, so that if we find anything that could be an ancient artifact we should contact one of the archeologists. There may not have been archeologists living here in early 1978, but today we certainly can call ourselves an “Archeological Expedition.”