My name is David ‘Diego’ Ladowski. I am 29 years old and I was born in Argentina to my parents, Avraham and Sarah in 1973. I also have a sister, Roxanna, and a brother, Gabriel. In 1992, I made aliyah to Israel. My parents and sister live here now too, though my brother moved to America. I studied at Hebrew University and completed my military service as an academic officer.

I served as a broadcast supervisor at the Ministry of Communications until 2001. Then, I enrolled in the Foreign Ministry’s diplomatic cadet program. 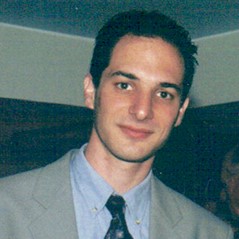 During my training, I served as Second Secretary, Deputy Chief of Mission at the Israeli Embassy in Lima, Peru.

My boss, the Israeli Deputy Director General for Europe, called me a motivated and dedicated, professional. He believes I have a very promising career in the diplomatic service because of my language skills, sense of humor and intelligence. This is truly my life’s work, and I am proud to serve the Jewish state! When I returned home to Jerusalem, I returned to school to work on my Masters in Public Administration.

On July 31, 2002, as I was sitting in Frank Sinatra cafeteria at Hebrew University’s Mt. Scopus campus. I was getting ready to hand in my final paper for the semester. Shortly after 1:30 PM, an explosive device, which was planted inside the cafeteria, detonated. I died instantly. Another eight were killed in the attack.

Another 85 people were injured. Hamas claimed responsibility for the attack, but no one has ever been arrested or prosecuted for my death.

My name is David Ladowski. I am 29 years old. And I am one of #TheFallenFaces.