Timing is everything. And the timing of the “palestinians” to wage the next step of their war on the border with Israel could not be more ill-timed. Tomorrow, they intend to use fire and smoke to enable them to harm Israel. The plan is to burn tens of thousands of tires, creating a huge smoke screen to enable them to attack us, without our being able to see them. They plan on crossing a line that will permit them to harm Israel. 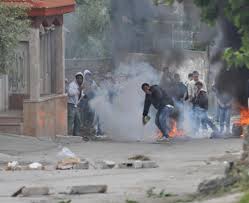 But, we have seen this movie before and it has had disastrous results for our enemies!

Tomorrow is the Seventh Day of Pesach. On that day, Jews all over the world will read the Torah portion of the Jews crossing the Reed Sea and drowning of the Egyptians. The Egyptians came to a certain line with the intention of harm, enslavement, and a host of other ideas. G-d used some particular tools to PROTECT His children: Smoke and Fire!

The Gazans plan to use the very items AGAINST Israel that Hashem used to protect them. And what  does the Torah say happened when the Egyptians wanted to attack?

(“And Moshe stretched his hand over the Sea and Hashem caused a strong easterly wind throughout the night and He made the land dry and the Sea did He split.”)
LOOK AT THE WORDS!

Hashem brought a strong wind…in Hebrew the word the Torah uses is עזה (“azza”) the Hebrew word also for Gaza!

Hashem protected us then, and He will protect us tomorrow and always! While the Gazans will attempt to harm us, G-d will step in. As He did thousands of years ago on that very same day, and save us from harm.

May G-d vanquish ALL of our enemies and may the world truly understand that ה’ הוא המלך that only Hashem is truly King of the world!