Nikki Haley is fast becoming my hero. I love her accent and I love her heels. But more, I love the sound of her telling the United Nations what we’ve all whispered to each other. You are a bunch of biased, anti-Semites. No, those weren’t Haley’s exact words, but they’re pretty close. 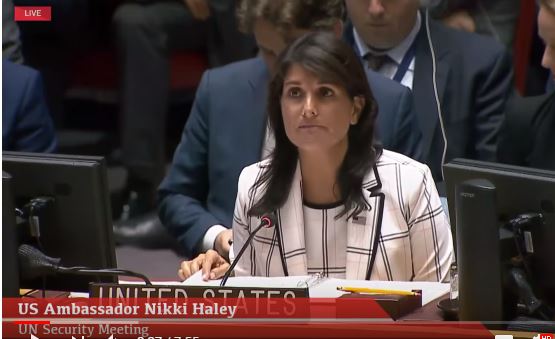 “Because this attack involves Israel,” says Haley, “the standard is different.” She goes on to explain that condemning Hamas for rocket attacks against Israel’s civilian population “should have been a no-brainer.” If you could have heard the laughter those simple words brought forth from so many Israelis, you’d be hard-pressed not to smile yourself.

Some of us have waited decades to hear these simple concepts voiced loudly and clearly. What she says is simply the truth. But in hearing it in her voice, from her seat of authority, she is turning heads. Turning heads, and touching hearts.

“The facts are clear,” she states. “On May 29,Hamas an an allied militant group fired at least seventy – SEVEN ZERO – rockets and mortars from Gaza into Israel. This rocket attack was indiscriminate, aiming to cause as much civilian death and destruction as possible…but the mere fact that one of the rockets landed on a kindergarten playground is all the proof we need of the intention of the terrorists.”

Listen to the whole broadcast. Did I mention she’s my hero?

It’s Not About the US Embassy in Jerusalem