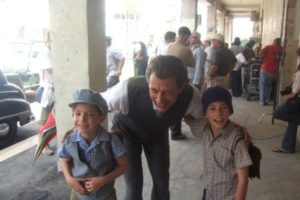 I set my alarm for 4:00 AM to give myself time to shower and prepare for our long morning. Funnily enough, Motti managed to get to sleep at a relatively normal hour (normal being a very loose term in the Rosenzweig Unabridged Dictionary) despite the fact that he was truly excited about filming the scene. I went to wake him at 4:30AM. At first, he didn’t budge and then I woke him gently again and said, “Motti..today is the big day! You’re going to be in the movies”. His eyes popped open and a look of sheer excitement engulfed his sweet and beaming 10 year old face. He jumped right out of bed and started getting dressed, took care of his morning affairs and then sat down for some breakfast. I started to daven (pray the morning prayers) at 4:35 AM. When we were both finished, we got our act together (pardon the pun) and went downstairs and waited for our ride to Haifa.

At precisely 5:20 AM, a Mercedes Benz van crept up our street in Ra’anana with a sign at the lower right-hand side of the front window stating “tzevet tzilumim” (filming cast and crew). Some others were inside and we needed to pick up two other passengers in our neighboring city of Hertzilya. After this, we were on the highway north towards Haifa, which is about 1 hour and 20 minutes drive away. We needed to be at the filming location no later than 7:00 AM. Work in the world of Hollywood and Filming can start as early as 6:30 AM, and even earlier. Having to be there at 7:00 AM is considered to be on the “late” side.

This scene was made to look like Haifa in the early 1950s. Colorful vintage autos from that era with names like “Cheverolet”, “Dodge” and “Pontiac” were lined up and down the street. Modern traffic signs were removed, yet not much else needed to be changed. The location was in the “Moshav Germany” section of Haifa which is very old and really hasn’t changed much in the past 90 years or so. Filming equipment was scattered about the area, as well as a canopied area where the director, cast and crew would sit in between takes, etc.

We arrived to the camp where the trailers with wardrobe, makeup and various things were set. Breakfast was being served and people were arriving greeting one another warmly and in a great mood. This tends to be the “norm” on a film set after many weeks of shooting. (One of the many reasons as to why I really love show biz).  We sat down to have some breakfast and chatted a bit with the other actors and extras there. There were 2 other kids Motti’s age playing extra parts as well and I befriended one of the parents.

After a while Motti was called to make-up for a crew cut. He needed to look like a kid from the 1950s and though his locks are short, they were too long for the years of grease. During his haircut, I looked across the camp and saw a large white trailer. Nobody was approaching it and I thought nothing of it. Yet, after about 20 minutes, the door flew open and a slim olive-toned man dressed in a suit, with very short brown hair, strong features yet a welcoming smile, standing at about 6’5 walked out.

The one; the only Jeff Goldblum, on his way to make-up .

“Wow..he’s tall”, was my first thought. The second thought – “I have to phone Penina..RIGHT NOW”! I phoned and said, “Penina..we had a ‘Jeff’ sighting”, and immediately hung up before she could react.

He walked to the trailer that Motti was sitting in and sat in the chair next to Motti. He leaned over and said, “Hi. I’m Jeff. Whats your name”? With a huge grin and beaming expression, my rambunctious 10 year old said, “I’m Motti”! Motti’s new found friend said, “Its a pleasure to meet you, give me 5”. Motti and he slapped each other’s palm and continued with makeup.

I managed to maintain a professional and calm demeanor (yes…miracles still happen), yet inside I was exploding.

When Motti was finished with make-up and hair, I had to bring him over to wardrobe. He was given plain navy blue shorts and an ugly, beige and light brown plaid short sleeved button downed shirt and a blue “kibbutz” hat to wear. He was given long, beige socks and old ugly sandals. The extras were Arabs either dressed in traditional Arab garb, kaffiyah and all; one lady was dressed as a nun (Haifa always had a large Arab-Christian population) with a large crucifix and one woman could’ve passed for one of the Andrews Sisters. The 2 other boys were dressed similarly to Motti. They all looked amazing.

At roughly 8:00 AM, we were all ushered over to the set. Motti and Ilan were brought over to the area of shooting by the director himself, Paul Schrader who was instructing the boys what to do and in particular to Motti as to when he had to state his line to Jeff. Motti was supposed to be riding a bicycle, yet it was too big for him as well as the other boy, so he was walking the bike instead. It was an old bike and it look as though it was at least 50 or so years old. Jeff walked over and helped out the 2 new young actors as well. During this whole project, Jeff and Motti really hit it off, relating to one another just like “best friends” do. They were joking and playing around, laughing and having a great time. Jeff was pantomiming and Motti responded with belly-shaking laughs and attempts to parrot Jeff’s improvised performance.

Jeff walked over to me and introduced himself and said that the kids were just great and hes having a great time working with them. His intentions were sincere and he meant every word of it. You could even see it as they were all getting along so well. He also mentioned in between takes that Motti reminds him so much of Jim Carrey that he cannot describe him in any other way.

The whipped cream and cherry on top of this most delicious cheesecake was when Jeff walked over to me a second time and said, “Rashi, I have to tell you something. After we rehearsed the scene, Mordy turned around and said, (he was calling him Mordy and generally I correct those who do so, yet for some reason, I really didn’t mind that day) ‘theres just way too much chaos here, I can’t work under these conditions, and then turns to me and said Jeff STAY FOCUSED”! We both burst into fits of laughter.

Filming was finished just after 1:00 PM. I walked over to the director personally and thanked him for giving Motti such a wonderful and unique opportunity that he will keep with him forever.

The next day the crew finished filming in Tel Aviv. That evening there was a cast party at some swanky place in Tel Aviv (no…we were NOT invited!) and Ehud Blieberg (executive producer – an Israeli who made it HUGE in Hollywood and whose offices are on Wilshire Blvd in Beverly Hills), Paul Schrader and Jeff Goldblum were on the 1:00 AM flight back to the States.