Actually, that probably isn’t true but I’m too sick to search and prove it. 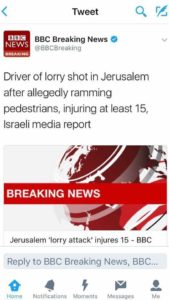 A terror attack in Jerusalem on this beautiful, sunny, winter day in Israel. A truck rammed into a group of soldiers. Five have died – three girls…young women, and 2 boys…young men. Five lives…stolen and more than a dozen others injured.

An Arab from East Jerusalem rammed his truck into them in what police are tentatively calling a terror attack. It’s okay, they know it was but they’ll confirm first.

It takes a special kind of evil to frame a terror attack in terms of “driver of lorry shot in Jerusalem” after “allegedly ramming pedestrians.” Was BBC too lazy to go and count the bodies themselves? Maybe the “allegedly” should be placed before “lorry” – how do they know it was a truck he was driving. Are they sure it was in Jerusalem.

Maybe BBC wants us to be grateful – perhaps we might otherwise have believed the lorry did the ramming on its own but now, thanks to BBC, we can allegedly blame the “lorry attack” (note the quote marks) on the driver.

In that sense, perhaps they are better than CNN, which apparently DOES blame the vehicle.

There you have it – the vehicle attacked, according to CNN.

The terrorist was shot by a civilian, apparently, who saw the incident and understood, as apparently CNN and BBC do not yet understand, that it was a terror attack.

May God bless the memories of those who were murdered today and may their blood be avenged.

Yes, this is what we say in Israel – not that we will avenge them. This we leave to God. It is for us to remember them, to mourn them, and to comfort their families and pray for the wounded.