There are times when a picture speaks a thousand words and there are times when the words not spoken simply break the heart. On Friday, two Druze soldiers were murdered. On Friday, pictures of both soldiers appeared. We know that their names were Ha’il Satawi from the Druze village of Maghar and Kamil Shanan, also Druze, from Hurfeish.

We know that Kamil’s father served in the Israeli Knesset and we know that Kamil was only 22 years old when he died. The list of what Kamil never had a chance to do in his life is likely longer than what he did accomplish. We know he never married; that he’ll never have children. The tragedy of his lost future will be with his family forever.

And Ha’il? He was 30 years old when he was murdered this past Friday. Unlike Kamil, Ha’il had a chance to marry and even celebrated the birth of a son…just three weeks ago. And that is the picture that breaks the heart, that defies all words we could offer to comfort his wife, his parents and siblings. 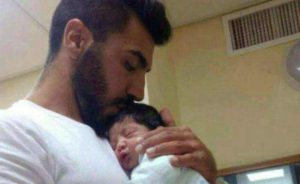 For Ha’il, the list of what he will never have an opportunity to do is extended to his child, who will never know his father, will never remember the short period of time he had to feel his father’s arms holding him.

When he is older, he will see this picture. He will see the love we all see now, the tenderness of the embrace, the kiss he will never remember. For Ha’il’s family, there is the comfort of this new child, a piece left behind.

There will always be the thought – at least he lived long enough to have seen and held his son. For those of us who did not have the honor of having met either Kamil or Ha’il, there is such sadness and there is this picture.

For so many of the attacks, the agonies of terror that Israelis have survived over the last 69 years (and even more when you include decades of attacks that preceded the founding of the State of Israel, we have pictures that bring us to the edge of despair. Some of the pictures are so ingrained in our minds, they have become iconic. Were I to copy them here, most of us could name the place perhaps even the year. 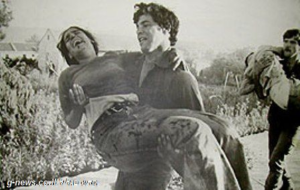 The picture of a brother carrying his sister from the school in Maalot in 1974 – 22 school children were murdered there.

The picture of Hadas Fogel, only 4 months old when Palestinian terrorists entered her home and murdered her, two of her brothers, and her parents.

I look at this picture and know that this one too will not be forgotten. In his death, Ha’il gave us this child. He becomes the responsibility of his wife and his family to raise; but he becomes ours as well.