In this fourth article in the Continuing the Dialog – Take 2 Series, I am dealing with my hate-mailer’s decision – to respond to the assertion that he is apparently mainly a stereotypical Anti-Semitic conspiracy theorist. His method this time is to resort to the common tactic of the Israel-hater – fiction. Here, he makes the fictional claim that the Jews are trying to destroy Muslim holy sites. And he does this, while simultaneously depicting the Arabs as the party in the Arab-Israeli conflict who are wonderfully respectful of the holy sites and beliefs of others.

To wit, my hate-mailer’s remarkable retort: “Palestinians couldve destroyed Jewish temples and the holy wall Jewish people have in Jerusalem like what Israel is doing at the moment by digging under al aqsa mosque, but they didn’t, even though Muslims ruled the place for centuries they never hitlered Jews.”

As a preliminary matter, let’s address your claim that “palestinians couldve destroyed jewish temples and the holy wall.”

First, the idea of a Palestinian people did not even come into existence until the 20th Century. Second, going back over at least the last 500 years (with rare exceptions that do not bode well for Arab respect for Jewish holy sites), Arabs rarely had any control over Jerusalem or any of the holy sites in the land of Israel. Second, the notion that Arabs treated our holy sites with any semblance of respect is laughable. Under the Ottomans from 1517 to 1917, access to the Kotel (Western Wall) was greatly restricted and under Jordanian control (from 1948-67) it was essentially treated like a place for dogs and donkeys to go to the bathroom (and it has never [EVER] been under “Palestinian” control). 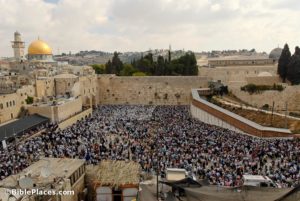 That the Arabs and Ottomans, however, never destroyed the Kotel is certainly nothing to brag about considering that the Western Wall is the base wall for the Temple Mount itself and destroying the Western Wall would destroy not only the holiest site in the world to Jews, but also the Al Aqsa Mosque and Dome of the Rock (which were built literally on top of the holiest site in the world to Jews and at the site of the two ancient Jewish Temples in Jerusalem). As an aside, if you ever want to know who are the colonizers and who are the colonized, just look at which party builds their holy sites on top of the others.

As for your claim about Jews trying to destroy Muslim sites by “digging under Al Aqsa Mosque” this claim is part of a very old and hateful Anti-Semitic canard that the Arabs have often deployed in order to gin up hatred against Jews. Sadly, there’s a long history to Arab claims that Jews have threatened (or as you claim, are threatening) Al-Aqsa, dating all the way to at least 1921. These claims have always been proven false, but often not before Jews have been murdered as a result. These claims are mendacious. Part “call to arms,” part conspiracy theory, and ironically, part very obvious psychological projection, due to past actions against Jewish holy sites that fell into Arab control.

The Nazi collaborator, and Mufti of Jerusalem, Haj Amin Al-Husseini, was one of the early adopters of this libel. His claims back in 1928 and 1929 that the Jews were seeking to damage Muslim holy sites, including Al Aqsa, led to numerous Arab riots and massacres, including the massacre in Hebron in 1929 that led to every Jew in Hebron being murdered or ethnically cleansed from the city. These same claims in more modern times – always utterly fake and with no credible evidence behind them – have often served as the basis for more recent violence against Jews, with numerous perpetrators of the stabbing attacks of the last 2 plus years – as part of the “knife intifada” – claiming that they decided to stab a Jew in order to “protect Al Aqsa.”

It is sad, that while these lies are so plainly false and absurd given the way Israel and the Jewish people actually treat all peoples’ holy sites; the Arabs in the region, having been inundated all of their lives with Arab and Islamist Supremacist hate for the other (and in particular, the Jew) so readily believe and act on those lies (often violently).

Let’s look at the reality of how Israel has treated and respected Muslim holy sites. First, right after liberating the Old City of Jerusalem from its Jordanian occupiers, Israel handed control of the Temple Mount to the Islamic Trust, or Waqf, and forbade any Jewish religious rite on the entire Mount (not just in the mosques), a “status quo” it has maintained to this day.

So, after vanquishing in barely 6 days three enemy countries who were promising a war of annihilation against Israel just a few days earlier, and after liberating the Jewish people’s holiest site, Israel proceeded to immediately hand religious control over that site to those same Arabs who had been promising to exterminate us. Can anyone credibly imagine Israel’s enemies being so benevolent?

Second, Israel has not conducted any excavations, archaeological or otherwise, under the Temple Mount, the Dome of the Rock or Al Aqsa. The only significant excavation in recent times was actually carried out by the Islamic Waqf on the site formerly known as Solomon’s Stables, now the El-Marwani Mosque. And that excavation by the Waqf was a crime against history and archaeology, where the Waqf oversaw the massive destruction of over 3000 years plus of archaeological treasures. So other than in the fantasies of the Anti-Semitic conspiracy theory addled brains of the Israel-haters, there is simply no basis for the claim that Israel is “digging under Al Aqsa.”

Third, Israeli control of the Old City of Jerusalem in the last half century has meant that for the first time in centuries there is absolutely full freedom of worship for all religious beliefs and practices in Jerusalem. Can the same be said in any Arab controlled lands?

As for the other absurd part of your claim that – “palestinians couldve destroyed jewish temples and the holy wall jewish people have in jerusalem like what israel is doing at the moment” – you really need to just do a modicum of research into your claims before you reduce them to writing.

Upon the Jordanian Arab Legion’s capture of the Old City of Jerusalem, after all of the Jewish residents were forcibly expelled, the Jordanians destroyed 58 synagogues, and looted and desecrated their contents. In fact, one of the synagogues which were maliciously destroyed, the famous Hurva synagogue, was where my grandfather had his Bar-Mitzvah in 1913.

The Jewish cemetery in the Mount of Olives, where we Jews have been burying our dead for over 2,500 years, was desecrated, and over 38,000 tombstones were smashed and used for building material, paving stones, or for latrines in Arab Legion Army camps. The Kotel (Western Wall) was turned into a slum area and Jews were not allowed to visit there.

More recently, Palestinian Arabs, when given any semblance of control over Jewish holy sites have resembled more the Taliban blowing up Buddhist cultural treasures and ISIS’s rampage over Christian holy sites than the tolerant pluralistic beings you seem to fantasize about.

On October 7, 2000, after constant attacks by Palestinian mobs since the Palestinian Authority was first given control of the area in 1995, the Jewish holy site of Joseph’s Tomb in Nablus (Shechem) was sacked and burned. Five days later, the ancient Shalom Al Yisrael synagogue in Jericho was sacked and burned too. And the Waqf, as described above,  in order to complete new underground mosques under the location of the holiest site in all of Judaism, closed off the Temple Mount entirely to any archaeological oversight by the Israel Antiquities Authority, used massive earth moving equipment and dump trucks (when they should have used archaeological tools and tooth brushes) and removed to city garbage dumps some 13,000 tons of rubble from the Temple Mount that included countless archaeological remnants from the First and Second Temple periods.

Bottom line, any claim that Israelis (or as Mahmoud Abbas recently said “the Jews with their filthy feet”) are desecrating Arab or Muslim holy sites or endangering such sites is based on two things – massive Jew-hatred, which has sadly infected a large part of the Arab controlled world (as viciously as it had gripped large parts of Europe in the first half of the 20th Century) and a classic case of psychological projection. It is hateful and libelous. It is also, as evidenced by the dozens of Jews killed by Arabs motivated to murder and riot by such libels, extremely dangerous. You should be ashamed of yourself for propagating such libels.

Unfortunately, you are probably beyond shame or redemption on these issues. But one can hope. After all, “The Hope” is the name of Israeli national anthem.