Strange title, no? What do camels and falcons have to do with anything? If you are listening to international media channels, I don’t blame you for not understanding the connection. And, I won’t show you the picture…I wish I’d never seen it. In the south, the Bedouins and Arabs that live there allow their livestock to roam freely. Goats. Camels. Donkeys. These animals roam freely in our southern desert. Sometimes, at night, just around a sharp bend in the road, the camels and donkeys cross the road. But, the road isn’t just a road, it’s a highway and people go fast – even driving at the speed limit and crashing into a camel is enough to kill the driver (and the camel). It has happened before.

You can’t blame the camel, but you can blame his owner. Finally, Israel did. The Knesset passed a law. As you are responsible for the damage your car does, you are responsible for your camel. If you leave a car in neutral and it crashes into another car – you will pay. If you allow your camel to roam freely – you will pay.
Camel owners must “mark” their camels. Camels that are found wandering in public areas…will be “confiscated” and the owner fined.
This morning, three camels were wandering in a firing squad. Inspectors came and as they went to catch the camels, the owner came speeding to the scene. He crashed his car into one of the camels and then fled.
Both of the camel’s rear legs were broken. Ultimately, because the camel was suffering tremendously, the inspectors had to put it to sleep.

I won’t show you the whole picture…I wish I’d never seen it. A few days ago, Palestinians tied explosive devices to the legs of a falcon – a harness to ensure the explosives stayed attached. And then they released the bird to fly into Israel. But I won’t show you the whole picture, but I will show you a small part. Look carefully and you’ll see the twirled string used to fasten the incendiary device to the poor bird. 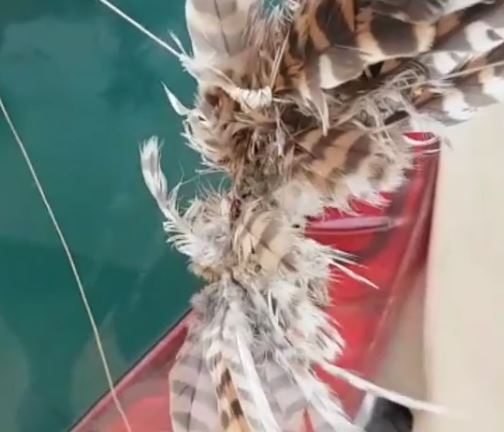 I don’t know what happened to the falcon in its last moments of life. Did it die from the explosive that ignited the fire? Did it live long enough to perish in the flames? As soldiers and emergency teams rushed to save the trees and the land, they found the bird, entangled in death.

A few days ago, a nursery school teacher looked out the window and saw a balloon floating towards her children. Entrusted by parents to this woman, they all now faced danger. The balloon landed in the playground; the teacher kept the children inside. Now children must fear balloons…and kites.

A camel, a falcon…balloons and kites. These are the weapons and the victims of a terror war waged against our civilians this summer. Four years since Tsuk Eitan (Operation Protective Edge), six years since Ammud Annan (Operation  Pillar of Defense), eight years since Oferet Yetzuka (Operation Cast Lead).

Like clockwork, the wars are waged and people die.

Obviously, CNN won’t tell you about the camel. Nor will BBC tell you the truth about the balloons. Instead, if they present it at all, it will be in the context of Israeli firing missiles into Gaza. A side point which is really the main point is minimized. THEY have launched hundreds or rockets at Israel. They have been sending fire bombs and have destroyed thousands and thousands of acres of land and crops. And they have terrorized, yet again, hundreds of thousands of people. No, you won’t hear about the sirens that have sounded for weeks in Israel or the fires that have destroyed so much of our southern region.

PETA condemned the use of “terror falcon”…in generic terms about how all humans should respect animals.

Finally, our government has issued a flat out ultimatum. Without doubt, it’s about time…beyond time…almost too late. For over 100 days, they have attacked us with firebombs, fire-balloons, burning tires, missiles, mortars and rockets. The Prime Minister of Israel has delivered his warning. Stop now, or we go to war, Israel has basically said. A broad military operation. War.

The camel is dead. The falcon is dead. How many more will die before the Arabs stop waging war against us? More, when dealing with a culture that finds it acceptable to murder camels and use falcons as tools of terror, what hope is there that peace will come soon?

All too often, we are like the driver cruising along the highway with thoughts of home, only to suddenly see the terrifying image of a camel entering the road. For us, it is war that waits around the corner for us and unless something changes, the jarring impact will come soon. No one wins in a battle between a camel and a car; and no one wins in war.