Well apparently what they all share is a complete lack of sensitivity, intelligent and honest reporting, and quite a bit more. There was a terror attack this morning on the Temple Mount in Jerusalem. 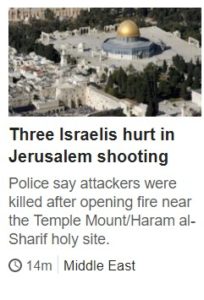 As of a few minutes ago, almost an hour after the attack, CNN is gratefully still unaware and asleep. BBC actually got it close to right, which for BBC is a miracle in and of itself. “Police say attackers were killed after opening fire” is the subheading but for once, the heading is correct -“Three Israelis hurt in Jerusalem shooting.” They have to be speaking about our soldiers, who were attacked on the Temple Mount this morning with guns and knives. The attackers…we call them terrorists here, can’t be the subject of the heading because they weren’t hurt, they were permanently neutralized and will likely be buried later today or tomorrow. 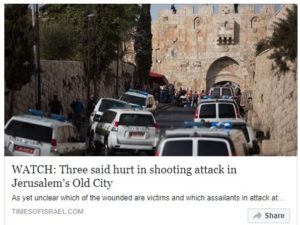 But there is no supposed here. We know what happened. We have witnesses; we have video. All over Israel the news is being reported. Three soldiers were injured, two seriously. Initial reports were that two were killed..I’m hoping that this was an inaccurate first report and actually is a reference to the fact that three terrorists were killed.

But what is incredibly wrong here is any so-called Israeli media outlet questioning injuries to our soldiers.

I have no idea what CNN will write; no idea whether BBC will “correct” their for-once-correct heading. But Times of Israel? Seriously? What are they thinking over there? How far have they slipped in quality (and intelligence).