It is always time for peace, but when do you know when it is time for war? That is the question Israel has been facing for the last few months. And, it would seem, tonight we have the answer. We could have been friends. Gaza and Israel. Neighbors certainly. When I first moved to Israel, my husband made friends with many Arabs. He’s someone who is so open, so friendly and, truth be told, he’s always loved a bargain. Somehow the Arabs in the villages near where we lived treated him with respect and gave him great bargains on all sorts of things. 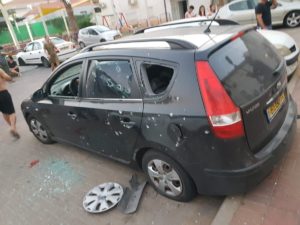 One day, my husband went to visit one of his friends in a village nearby and found the man sitting there very upset. One arm was heavily bandaged with a cast and he was desperately trying to save the fish in his pet store. His massive tank had sprung a leak and he was working with one hand. Immediately, my husband began helping him to save the fish and whatever else he could.

He was gone for hours. We didn’t have a cellphone back then and I was so worried. Eventually, he came home and explained. How could he leave his friend there to lose so much of his stock, his business? They were friends. Neighbors.

Months later, we hired a man named Taysir to paint our house and do some other work. I was expecting our fourth child and I spent many hours speaking with Taysir. He told me pregnant women shouldn’t drive – it was bad luck and I smiled. And Taysir taught me how to make coffee and when to put the sugar in. At one point, Taysir said his wife wanted to meet me and asked if I would agree. And so, a few days later, I drove him to his village and at the entrance, he told me to stop. Women weren’t allowed to drive in his village so he wanted me to switch seats and let him drive my car.And I did. Really.

I met his wife and though she spoke only Arabic, the two of us talked for over an hour with poor Taysir having to translate back and forth. We talked about our children, cooking recipes, and more. Poor Taysir. But his wife and I had a great time. We never got a chance to really be friends.

And so I tell you now, Gaza, we could have been neighbors. You could have worked in Israel, easily come to our hospitals. We could have visited your beaches and shopped in your stores.

Instead, Gaza, all over Israel tonight, Israelis are thinking of horrible things that we would wish upon you. It is the way we are. In your anger, you fire on our cities, on our children. In our anger, we think. Well, usually. Sometimes, we go above anger…sometimes, we act. Three people wounded so far tonight, nearly a dozen being treated for shock. Houses damaged. Cars destroyed. A kindergarten playground hit.

Our children are sleeping tonight…if they can sleep at all…in bomb shelters. We could have been friends. But there is one thing you forgot, Gaza. You forgot that even we have our… 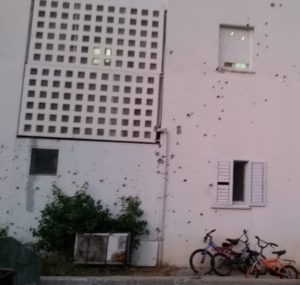 You forgot that even we have our limits and we are fast approaching it. We could have been neighbors. We could have been friends. Instead, tonight we will be enemies, adversaries. And what you forgot most of all, is that you are, ultimately, quite weak. You’ve squandered billions of dollars that could have improved the quality of life in Gaza. But that’s your problem, not ours. Meanwhile, we’ve built nothing less than a technological empire of advanced weaponry. You are about to find out how advanced.

Rocket attack on Or HaNer, Erez

Ultimately, we aren’t friends, nor do we recognize any obligation to be neighborly. You’ve bombed over 300,000 people tonight, frightened our children, and raised the stakes in the war you started weeks ago. For over 130 days, you have been sending balloon bombs and booby-trapped kites that have destroyed over 40,000 dunams of land. And tonight, Israel is sending a message to our Prime Minister. For this entire summer, we have let you wage war according to your terms. Now we…

Now we fight according to our terms. In the hours since these attacks began, more than…

In the hours since these attacks began, more than 70 rockets have been fired at Israel. Just as I have been writing this, at least another 8 have been launched against us. We are fast approaching the point where we all accept it is time again to send our sons to the border to fight. It is one of the hardest decisions for a country and a people who love life to make. But we will make it because the decision to do nothing has proven to be the wrong one.

May God watch over Israel in the coming hours and in the coming days. It is never a good choice to go to war, except when it is a worse choice not to. But we know that as in all the wars, the Defender of Israel is beside us. Please God, put Michael be at our right hands; Gabriel at left left; before us, Uriel; behind us, Raphael; and above our head the divine presence of God.

The time for war has come.

And rocket attack on Miflasim

And rocket attack on Dorot, Ruchama, and more…

Yes, another attack on Keren Shalom