The two state solution, the most favored of all solutions, the one the USA and Europe and all Knesset members seem in one form or another favor, is today’s solution to bring “peace in our times”.    Has anyone heard of the three state solution?

The world is very upset at the after pictures, after an Arab provocation, Arabs get tear gassed and shot at with rubber bullets.   The world considers the Israeli territories past the green line to be Palestine.

Google maps consider it Palestine, calling cards, Accuweather, maps around the world now call the area past the Green line Palestine, as does the United Nations, which has recognized Palestine as a member state.

So, the dream of Oslo, which is my nightmare, has borne its ugly fruit.   The post Zionist dream, the vision of a new Middle East, has produced “Palestine” and all it stands for, sharia, Jew free cities, where streets are named after terrorists and the terrorism is a job like any other, doctor, lawyer, terrorist.   It is place known to Jews as Yehuda and Shomron.   It is a place where I live and when you include the Jews of eastern Yerushalayim, which UNESCO calls occupied territory, holds at least 700,000 Jews, 10% of Israel’s Jewish population.

There are those sadly in the Jewish world, the land of Israel that call for two states for two peoples.   It starts at the top of the political echelon, the elite, the Prime Misfortune and his cohorts.   Who supports two states, where are these two states and who lives in these two states?

The Likud faction is an extended arm of the Prime Minister, he has complete control over it.   All others that try to wrestle it from him, somehow end up fired, “let go” or in some police scandal that sends them packing fast from the Knesset, Likud is Bibi and Bibi is Likud.   Likud or Bibi, support the two state solution, spend millions of shekels to uphold Abbas, transfer millions of shekels of taxes to the “Palestinian Authority” in order that they should provide services for among others terrorists and terrorists salaries.   Bibi’s ideal solution, is to give away my home and the home of 700,000 Jews back, but its only because they do not behave that he holds on.   Bibi has tried to withdraw the IDF and was blocked by Benett in the past.   We will discuss Bennett’s dream of a two state solution soon.

The next faction is Yisrael Beitainu, as Minister of Defense, Avigdor Lieberman, who believes in two states for two peoples, except with a twist.    Bring all the Israeli Arabs inside the Green line and transfer them outside the Green Line, withdraw inside the 1967 borders and Shalom al Yisrael, until of course, the first mortars and rockets from Yehuda and Shomron fall on the airport and shut down the country’s main air artery and they firebomb Route 6, and shut down the country’s main North south highway.

The next solution comes with a new approach, which is to declare sovereignty in Yehuda and Shomron, but do not get excited, the two state solution, is alive and well.   The proposed agreement would withdraw the IDF and divide Yehuda and Shomron into alphebet soup, A, B and C, add hundreds of thousands of Arab citizens who hate Israel with their blood, granting them citizenship.   Before that happens, in order to foment coexistence, Bennett has proposed the doubling of work permits for the Arabs inside the Green Line, the source of terror in Israel.   When the territories are sealed, the blessed few days a year, there is no terror.   Bennett’s team has produced such marvels as the Regulation Law that forces Jewish landowners to pay Arabs for stealing their land 120% of its value for claims, in lieu of being evicted, and his justice minister appointed an Arab to the Supreme Court and the first female sharia court judge.    So much for the right wing in Israel.

The next solutions, go downhill from there, including Lapid’s massive IDF withdraw plan, giving back Aza to Egypt with additional lands of Israel for sale, and Yehuda and Shomron back to Jordan, so we can peace with our “regional partners”, this is the basic plan of the left, and it includes Herzog’s labor camp and Meretz, with Kachlon still trying to get down the price of milk and cheese, without much to say about whether the two state solution should live or die, they have yet to bring down the prices.

How about taking all of the above “solutions” and adding some reality to the nightmare solutions, being imposed on Israel from within and without.

How about taking the best of the offers on the table and creating a lasting sustainable solution that will not bring us to death in a hurry?    There is no doubt Jews will die if the IDF withdraws, Hamas in Aza has proven this after the disastrous withdrawal that has cost Israel so much in blood and money since 2005.

Lieberman is on to something with population transfer.    He is the only one brave enough to suggest a change in policy with regards to the Arabs inside Israel.    They are not Jews.    As much as the left would have you believe, they are not Zionists either.   Lieberman has the right idea, they must be transferred out of Israel.   Lets give him credit where credit is due.   Bravo Lieberman, now go home before you destroy Israel.

Lets also take the idea of two states, for two peoples, that Bibi, Lapid, Herzog, Bennett in his vision of a permanent Palestinian authority and annexation A B C plan.   This is not a flawed plan, just the borders need to be revised.   Separation, with intensely fortified borders, an Iron Dome, Air force and David’s sling, and a few nukes will be our peace guarantors, and lots and lots of distance between us.   Let us take the hostile Arabs, the ones that fly ISIS and Hamas flags and send them to their brothers.   Egypt will absord the Azans, Hamas disintegrated, and its people scattered to the four corners of the world, and the hostile Arabs of the West Bank to Jordan.   On June 4, 1967, there was not one Palestinian found in the West Bank, there were Jordanians, flew the Jordanian flag, these Arabs will go back and serve Jordan and will stop coming to kill Jews, stop running over Jews, stop stabbing Jews, stop burning Jews, stop shooting Jews dead.

How many Jordanians who are standing in Jordan kill Jews?   Let the Jordanians, who occupy the West Bank, go to Jordan and let be their state, and let the Egyptians, who on June 4, 1967 were Egyptians go back to Egypt.   This is the real solution.

Jordan and Egypt don’t like it?    How about building the Maginot Line on both borders before we put this into place?   Are we afraid of the Egyptian air force?   The combined Egyptian and Jordanian air force?   Do you think the Saudis want to go to war with Israel?   The Quataris?    Who is it we fear?   The USA will stop giving us military aid?   Yes, maybe for a year or two, and then we will have it back.   Don’t worry, people forget after the media fest is over, but we will LIVE!   We shall not die because of WHAT COULD BE!

If you think that they want to go to war with us, you are mistaken.   We have to protect ourselves nevertheless and build a huge fortification on all sides before we put the plan into action, just in case.

Hezbolla would love the opportunity to attack, and this is really a good excuse.   We must be prepared as well.   In essence and this is the real reason why the government of Israel sits down like a beaten dog and makes we will overcome speeches every time another Jew is killed, is because they cannot face the reality of war in order to save Jewish life.   Isn’t that the whole reason for the state of Israel’s claim to fame?     To be the place where a Jew is not hunted and killed like an animal?    Yet the Jew walks not free in his land, he walks in fear.    The IDF and all its worth still cannot protect the Jew in the street of Israel.    How sad that is, the IDF still refuses to prepare for an all out war, with Hezbolla, Jordan and Egypt simultaneously, in order to free us from terror once and for all.    This is the only option.

This is the result of withdrawal.   We had southern Lebanon, we had the Sinai, we HAVE Yehuda and Shomron, and think about being attacked from Ramot, is this where you would like the war to start?    Do you want Jordanian tanks starting the incursion from Ramot, or is the Jordan River a better place for them to start?

Its all about war, its all about valuing the life of every single Jew.   The two state solution, is a guaranteed death trap, one that will lose much more lives than challenging the Arab world to once and for all take in their brothers left behind in the war.

Its time we stand up for every Jewish life, and the IDF do its job and protect the life of every single Jew.   Remove every Arab in the West Bank and Aza, along with the Israeli Arabs, who are not Zionists, are not Jewish and produce the Ghattas’s and the Zoabis that try to bring our country down.

Standing strong has always made Israel strong, giving into todays anti semites of Europe that fund the two state solution and fund the NGO’s that try to destroy Israel like Breaking the Silence, Peace Now and Yesh Din, has never ever helped Israel.   We have to value each Jewish life and let one Jew be attacked unanswered.   Two state solution is really a three state solution, involving Israel, Jordan and Egypt.

If we wait until Egypt, Jordan, Hamas and Hezbolla get nuclear weapons, and dont think they will not one day, what will be then?    The time is now.    We cannot delay.   Save Israel while we still can.   Every Jew’s life in Israel depends on this.    This is the only solution that Israel has a chance to survive in.   Take the best of all the ideas and combine them into one.     We are approaching a cliff, a window of opportunity that is closing, we must show others the lead and make it clear, we will stay and THEY WILL GO! 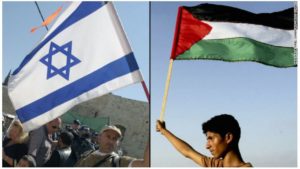 My name is Peretz Teller, proud member of Border Patrol and the SWAT Team.. כיתת כוננות. I made aliyah first time in 1997 and a second time in 2015.... I am a former Chief Financial Officer in the USA who started the journey to Torah and mitzvot in college at the Wharton School of Business.. After graduating I returned to my native New York City and then eventually moved to Israel in 1997.....I am outspoken and fluent in current events and I have been advocating for gun rights and ownership in Israel and abroad.
View all posts by Peretz Teller →