In just over 2 hours, an air-raid siren will sound all over Israel. It’s a sound that pierces the heart, a wailing that cuts the soul. My children will stand in silence and listen. Somewhere on a border somewhere, my youngest son will stand and listen. Two minutes that reach deep into your soul and pull your heart out.

For the next 25 hours, we will mourn the loss of tens of thousands of Jews, lost in our wars and terror attacks. Most died defending this land, knowing that it had been re-established and would be our eternal home. They died to make that the truth.

Each year, as the following day draws to a close, the nation does a sudden “switch” to celebrate Independence Day – we celebrate as deeply as we mourn; we mourn as deeply as we celebrate. The first year that my oldest son was in the army, I thought this day would be hard for my eight-year-old daughter and suggested that she could stay home if she wanted to – her teacher agreed that she should be the one to decide.

“But Elie is fine,” she said. “Is something going to happen to him?” I reassured her that he was fine and God willing would be fine. That being the case, she saw no reason to stay home. In the end, she went to school and I drove to work. What I didn’t do is go to the ceremony held in our city. I had been to many others. I knew how it would begin, what would said, what would be done. 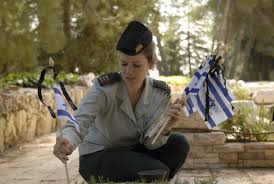 Then…and tonight…it will begin with a siren. Everyone will stand in silence. Already the tears, so close to the surface, will begin to flow. As the siren ends, the ceremony will begin. They will call up the parent of a soldier that has died to light a torch that will burn throughout the ceremony. This year, it will probably by the mother or father of Stav, a beautiful young woman who died when the bus on which she was traveling crashed. There were reports that the other driver, a Palestinian, intentionally drove towards the bus and caused the accident but, like many such attacks, in the absence of absolute proof, it was not declared a terror attack.

After the flame is lit, several people will come forward to lay wreaths of flowers. When this is done, there will be some passages recited – people will cry. Stories of those we have lost will be told, pictures shown. The rabbis will stand and recite some Psalms and there will be songs that are sung, tears that fall. We do it every year and each year it is as if we never did it before. This year, almost 100 more lives were lost in the battle for this land.

Wherever David is now, I know that a few moments ago, he heard the siren. He was in my mind as it wailed. Please God, please watch over him…over all of them. Let this be the last time we mourn newly fallen. May God bless their memories forever.