Yesterday, as soon as I saw an invitation online to come to a Brit Milah, I said that I would attend. This wasn’t “just” another Brit–it was a Brit of a newborn boy, in the Salomon family. This is the family whose grandfather, Yosef and two of Yosef’s adult children were slaughtered in their home this past Friday night.

The baby boy had been born on Thursday last week, only a day before the horrible tragedy. It was during the Shalom Zachar for the new baby that a terrorist walked into their home in Halamish (Neve Tzuf) and murdered these innocent souls.

So, it was with a tremendous amount of strength that the family made the decision to invite the country to participate in the Brit Milah of the new baby. While the country mourned along side the family for the tragedy, the country would stand shoulder-to-shoulder to celebrate the entry into the Covenant of the Jewish people.
The event took place in Elad; a community I had passed hundreds of times but had never been to in my life. We arrived about 45 before the appointed time and found that we would not be permitted to enter the hall. The hall was only for family and close friends. No problem, because they also set up a live feed that was broadcast outside. Due to the extreme heat, the local chapter of Ezra (and perhaps others) busied themselves with passing out what had to have been hundreds of liters of water.
And then, the time arrived for the Brit to begin. As I waited for it to begin, HaRav Yisrael Meir Lau shlit”a (former Chief Rabbi of Israel) walked passed me to enter the hall. Turns out that he was the one to make the Brachot, name the baby and speak to the family and to the Nation.
Looking around the crowd of close to 1000 people, one could see tears in the eyes of almost everyone present. These tears had a dual meaning. On the one hand, the family was still sitting Shiva and the searing pain that they have endured was obvious on their faces as they entered the hall. On the other hand, they were tears of joy, as well, as throngs of people gathered to share in their joy of the Brit Milah.

As the ceremony began, people craned their necks to be able to see the smallish monitors outside. The sound system worked very well, so we heard everything. On the invitation to the Brit were the words ואמר לך בדמייך חיי ואמר לך בדמייך חיי (“I said to you in your blood, live…”) This theme was repeated a couple of times by Rav Lau as he spoke of the blood of the tragedy and the blood of the Brit. It was a very poignant message; one that all present fully understood and absorbed.

And then the baby received his name: Ari Yosef. The name “Ari” they had already chosen before the Brit. The name “Yosef,” who was the grandfather of the baby, who was murdered, was chosen after the tragedy. During the Shiva for Yosef Salomon, during the very week in which his family sat thinking of his holy neshama, a baby entered into the Brit of Avraham Avinu, carrying his name.

While the naming itself was emotional, perhaps even more so was the Birkat HaGomel. This blessing of thanksgiving to G-d is made on certain occasions, one of which is by a mother after having a baby. The fact that Chen, the mother, made the blessing was a “normal” moment. But then the grandmother and another daughter both stepped forward to say the Bracha as well, as a thanks to Hashem for having survived the tragedy (for which we know they were heroes in the story, saving many lives).

And then, as with the end of every Brit, we said the prayer of Alenu. We state that no matter what, it is incumbent on us to praise G-d, the Master of the universe. In the face of unimaginable pain and suffering; in the face of searing sorrow, the family, along with the rest of us recited the words: עלינו לשבח לאדון הכל. At that moment, all those present said out loud (or thought to themselves): מי כעמך ישראל Who is like thee, Nation of Israel! Indeed, who is like the Children of Israel?

May the Salomon family find some form of solace in this tragedy with the outpouring of love from all of Israel. Mazal Tov to the family on the birth of Ari Yosef. And may they also be comforted among the mourners of Zion and Israel.

Indeed, tears of happiness and tears of sadness….

(Seen below is a small cross-section of the crowd outside) 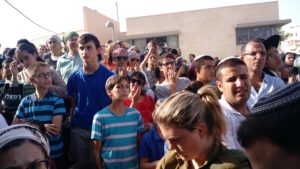