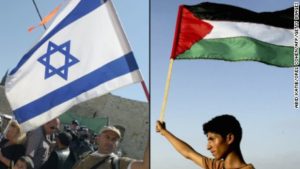 It’s sort of God’s way of cleaning out His closet, so to speak.  First, everything has to come out:  All things tucked away and hidden for so long come out, become visible, and are assessed and sorted.  This is where everyone’s real colors show through.  It is all coming down to two camps: Am Yisrael and the Erev Rav.

All those God-less big-wig academics at Hebrew U who refuses to play HaTikva (in particular Prof Dror Verman, Dean of the School of Humanities there) are also showing who they really are – to which camp they really belong, being that of the anti-Israel Erev Rav.  Tel Aviv U long ago expressed in which camp it belongs, and it isn’t that of Am Yisrael either.

On the other hand, there’s a beautiful article circulating about former Miss Israel, Mor Maman, who has undertaken teshuva B”H and has resolved not to wear any more immodest clothes.  She won the real jackpot!  Here’s an example of a spark clarified into the camp of Am Yisrael.

Back to the other camp, there’s another article circulating of a “big” (in This World!), fancy name who turns out to be an Erev Rav traitor.  In Susie Dym’s May 17th (2017) article in Arutz Sheva, we learned about “World Mizrach Rabbi” and former Chief Rabbi of England, Jonathan Sacks, that –

“Rabbi Sacks’ shocking attack on the good name of Israel and her soldiers was gleefully disseminated by the major British media – in the dark days of 2002. Breaking the Silence would never have dared do what they do, nor would they have gained such respectability in academic circles, had the door to such unjust Israel-bashing be‎havior not been thrown open by no less a dignitary than Chief Rabbi Jonathan Sacks…

Rabbi Sacks was asked, in a Guardian interview, about what a hostile reporter termed Israel’s “occupation”. Rather than turning on the reporter, Rabbi Sacks preferred to turn on Israel.”

Our Sages z”l gave us the signs and fair warning about all this – about the Erev Rav of our generation – so that we can tell the difference and decide on which side we want to be (and, no, it is not lashon hara to expose the Erev Rav – just the opposite).

“There are five forms (or, literally “species“) of Erev Rav: Amalek, Nefilim, Giborim, Refaim, Anakim.  Of the five, two forms of Erev Rav, Refaim and Anakim, are intermingled among Israel and cause them to sin (Zohar, Genesis, “Five Forms of Erev Rav,” sections 224-231).

“On Refaim, the Zohar says: ‘If they see Israel at a time of trouble, they leave them and deploy from them.  And even if they have the power to save them, they do not want to save them, and they slack off from Torah and distance themselves from it and from all that deal with Torah, [in order to] do a favor for their idol-worshipping’ (ibid).

Also remember that there are FOUR times as many Erev Rav – who are intermingled among Am Yisrael – than Am Yisrael (MeAm Loez and Tanna Rabbi Yonatan ben Uziel, aka “Amuka”, both on parashat “Bo”).

“This is the generation where all souls, like magnets will zip off and attach to the side they belong to.  This is why over a million completely secular Jews, who grew up not knowing diddly-squat about Judaism, suddenly returned to Torah.  And, in turn, why others from religious homes, left.  This is part of the Clarification of Sparks that is part of [The] Thought of Creation at large” (To Cross The Line With a Bridge, chapter 7, p. 90).