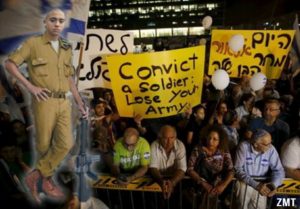 Until now, it’s been us against them.

Do you remember Chaim Potok’s 1967 modern-classic, U.S. Number One best-seller The Chosen? The opening action scene is dramatic and captivating.  What begins as a school varsity softball game, morphs into mortal combat.  There is actual, bitter hatred.  The book’s speaker, Reuven Malter, and representative of the dungaree-wearing modern-orthodox, even states, “the game stopped being merely a game and became a war”.  The “enemy” were the Chassidic, black-and-white dressed yeshiva bochurs led and represented by Danny Saunders, who shouted “kill the apikorsim”.

The enemy “them” seemed so clear.  That was then.  Today, those we may have deemed the good-guys, one of “us”, are betraying us – Am Yisrael and Eretz Yisrael.   But the mindset of us versus them remains despite the reality.

We never thought that they – who we thought one of us – would really do it to Gush Katif.  But they did.  And now they’ve done it again.  So, maybe they aren’t really one of us.  Indeed.

Today after their victory over Amona, we need to reevaluate who’s against whom.  Today we need to identify who the enemy really is.

The Chassidic-Charedi-religious population actually spans a wide gamut of practices and beliefs.  Most secular automatically point to the Neturei Karta and erroneously lump them in with the rest of the “black coats” and even modern-orthodox religous, when in fact close to 100% of Chassidim-Charedim disown the NK, some even having a cherem on them.

Putting aside Erev Rav mossrim who buddy-buddy with our Amalek enemies, there are very legitimate issues proffered by some who “we” have labelled “them” and thus the enemy.  But we need to separate issues.

The main issue put forth is that the Land of Israel given by Hashem to Am Yisrael to live in and by His Covenant, Torah, must be governed according to Torah.

King David on his death-bed instructs his son, the new King Solomon, “And you shall keep the guard of God your God to go in His path and to keep His statutes, His commandments, and His laws, and His testimonies, as is written in the Torah of Moses, in order for you to be educated in all that you do and to all where you turn” (I Kings 2: 3).

Today we see too stark the outcome of a government devoid of Torah, as is that of the State of Israel:  Declawed soldiers by the “Azaria Effect” and Jewish communities brutally uprooted by state police are complete antitheses of Torah.  So, when “the religious” protest a non-Torah government in Eretz Yisrael over Am Yisrael, guess what? – They’re right!  On this particular point, they are absolutely correct.

“If in My statutes you walk and My commandments you keep and do them, then…you will dwell in your land in SAFETY [and]…I will give PEACE in the land” (Vayikra/Leviticus 25: 18 and 26: 1-6).

The enemy is no longer the religious Jew, and it should not.  The enemy is that which actively works to destroy Israel – and today we see that that is the Erev Rav establishment that rules the State of Israel, including the government, the courts, the media, and (even?) the police.

Am Yisrael’s enemy is the Erev Rav.  But this is a spiritual-metaphysical war, so the only way to fight back is by being true to who we really are – Am Yisrael.  That is, the only way for us to fight and beat them is by being and acting like Jews – truly, authentically re-embracing our Covenant with Hashem and this land – Torah.