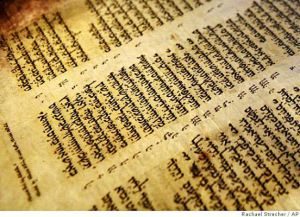 Human fascination with the forces of magic and sorcery – the “other side” – is from time immemorial. There are two paths to drawing non-physical energy: Pulling downward – “from above downward” – being “the other side”, and the path of holiness, which is upward – “from below upward”. The Torah’s path of holiness is the greater and more powerful.

Torah provides knowledge of both paths – indeed, of everything in all of creation. But Hashem instructs us to choose good over evil, and thus work only by the path of holiness.

Yet, the essence of the parsha is not sorcery, or the “other side”. Parshat Balak is actually full of encoded secrets regarding Mashiach and the Geula. After all, Balak is a descendant of Lot, and through his sorcery he saw that King David, Melech Yisrael, is his descendant: Ruth the Moabite is the daughter of Eglon, the king of Moab and son of Balak, i.e. Ruth is Balak’s granddaughter.

Bilam in the parsha is called Bilam ben Beor (BaMidbar 22:5). The Gemora then identifies Beor as Lavan HaArami (Tractate Sanhedrin 105b). That is to say, Bilam is the last child of Lavan – i.e., he’s Rachel’s and Leah’s baby brother – and was born after Jacob had already come to live in Lavan’s home. [According to the Ari, though, Bilam is not his actual son, but his reincarnation].

Bilam, who later on was the evil advisor to Pharaoh (the other two advisors being Yitro and Job) and the last of the gentile prophets, in this parsha puts forth seven parables: the first three being blessings for Israel, and the last four being prophesies regarding the future of Israel and the nations of the world.

Balak and Bilam together are particularly dangerous. Taking the last two [Hebrew] letters of their respective names – BLAM & BLK – together make AMLK (Amalek), and the remaining letters, BBL – Babylon – is the force that destroyed the First Temple (from Rabbi Moshe Chaim Armoni’s “Bati L’Armoni”,parshat Balak).

Regardless, even when this combo of the best sorcerers are together and even commissioned to whip up their best evil to curse the Nation of Israel, ultimately, only Hashem runs the world, and no curse can prevail on His Chosen People – Am Yisrael.

What we can take away from this week’s parsha is so apropos of this week’s headlines. UNESCO can try to condemn Jewish presence in the Old City of our holy and eternal capital Jerusalem and even try to deny our sovereignty in Jerusalem at large, and the various perversions of Judaism, as represented by the various factions at the Kotel, can try to redefine the original classical and classic Torah, but…

It’s all a test to check where each of us stands vis-à-vis these forces of evil and absurdity.