This post is part V of the Response to “Hate Mail” from an Israel-Hating Conspiracy Theorist series dealing with biased and incorrect claims often made against Israel.

Sadly, your next claim (if it can be called that) is just another crazy conspiracy theories, which, unfortunately, are the province of many Jew-haters, including Nazis, the KKK, White Supremacists, Louis Farrakhan supporters, Hamas members, etc., and this one is quite a rambling one to boot: “I find it ironic that ISIS never threw a rock at israel and all they did was kill muslims and make us look like terrorists at the same time, while israel is having fun in syria right now its almost as if they did exactly what israel needed to be done, hmm”:

First off, the notion that “all” ISIS did was “kill Muslims” is offensive to all of the Yazidis, Kurds, and Christians murdered, raped and enslaved by ISIS. You should be ashamed of yourself for even writing such a thing. Second, you really have to become more intellectually inquisitive and stop believing every crazy conspiracy theory you hear just because it plainly conforms to your beliefs and bigotry. The idea that Israel is behind ISIS is as crazy as the claim that Jews started or are responsible for starting both WWI and WWII. A favorite among Jew-haters and one that is featured in Article 22 of the Hamas Charter. You believe that one too?

ISIS was a product of the power vacuum created in Iraq – after the US toppled Saddam Hussein and then left Iraq in 2011 – and a result of the additional power vacuum created by the failed Arab Spring in Syria and the resulting civil war. Neither were influenced or created by Israel, which has its hands full and would have preferred quiet on its border with Syria, quiet it actually had for decades before the Syrian Civil War. 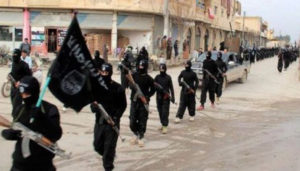 It is astounding that after supporting extremist Muslim groups like Hezbollah and Hamas, who kill fellow Muslims regularly, that people like you are surprised that another even more extreme (though not by much) group like ISIS arose who also murders Muslims that they don’t think are “Muslim enough.” It is as if you don’t learn from history … of course, since you apparently don’t know it very well (if at all), that should not be surprising.

You are also incorrect that ISIS has not even thrown “a rock” at Israel. First, ISIS has tried to attack Israeli forces in the Golan Heights and failed. And ISIS claimed responsibility for rocket attacks on Israel from the Sinai. Each time, Israel’s military response has been prompt, effective and forceful. And Israel in early 2018 assisted Egypt in its fight against ISIS in the Sinai by directly conducting over 100 airstrikes against ISIS positions against ISIS forces. So, as is to be expected, not only is the speculation behind your Anti-Semitic conspiracy theory incorrect, the “facts” upon which you based your theory are fake too.

As for why, with the exception of one terrorist attack in Jerusalem that ISIS has taken credit for, ISIS has not successfully attacked Israel, the simple answer is that they have had their hands full in Iraq and Syria and have been in no position to take on an even more powerful enemy like Israel. One good lesson for most conspiracy theorists is that the simplest explanation is usually the right one. Of course, when you are raised in stew of Jew-hatred your whole life, the simplest explanation is always the one that paints Jews or the world’s only Jewish state as uniquely evil.