In the summer of 1986, my mother turned seventy years old. She had been a widow then for the same amount of time as she had been married.  To mark the milestone, my brother, my then husband, and I held a surprise birthday party for her.  The pictures that sit in an envelope in my home in Jerusalem tell the story of that party. From her surprised face to the faces of her generation of cousins, all now deceased, as is she, and the faces of the next generation of cousins, some also gone now, it was a gathering that mirrored her life and stories were shared of younger days and earlier family experiences.

She lived another twenty-one plus years, dying just three months shy of her ninety-second birthday. For the last ten or fifteen years of her life, she lived in self-made isolation increasingly avoiding risks and opportunities.  Although I lived less than two hours away and spent much time with her over that period and we talked about the past, the future and dreams deferred seemed to be a topic we could not discuss. Maybe if I had more forcefully reached out a hand to remove some barriers it would have been different.

As the conveyor belt of life moves us along, it is always a challenge to not let the numbers and our changing bodies become obstacles to a full life.  As my generation of American whiny and spoiled baby boomers gets older, there is a belief that denial of the ravages of age will make them less real. The sixty is the new fifty slogans, or whatever the numbers might be, are filled with goofy optimism and probably lead to more backaches than fulfilling experiences.  In accepting the limitations and adjusting, it made sense for me to make aliyah in my sixties.  The milestone of retirement presented only an opportunity and the obstacles fell away.

During Pesach week, just ten months away from my own seventieth birthday, I went on a day long tour (tiyul in Hebrew) with friends.  With my extra pounds, short legs, and minor balance issues, there was one part of it that involved hiking up a stony hill that presented unsure footing.  There were moments when I thought about not continuing to the top. This tiyul brought us to the site where three hundred Jews who participated in the Bar Kochba revolt of 130 CE, the last revolt against the Romans prior to exile, lived in caves with their families trying to carve out a life on this rocky terrain, most likely knowing that it was a futile effort to avoid slaughter by the Romans.  The revolt is something that has haunted me, as Masada also does for me and many Jews, since I first read about it as a child and this opportunity, even with the rocky terrain, was one that I would not miss. After all, there would be no Romans at the end of this journey. The land is ours again. 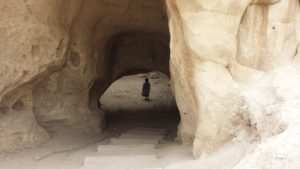 There were a couple of other people struggling a little, but a quite elderly woman with a white cane and frail body accepted the strong hands reaching out to her to help her, although she was sprier than some of us. This resulted in other hands reaching out.

This was mostly a group of religious Jews.  Many Orthodox men and women normally do not touch, although some do.  My dear friend’s husband (and he is also a dear friend) and I have not shaken hands nor hugged, although we have spent much time together.  He is a large guy, a devout Jew, and a very kind man. Without hesitation, he reached out his hand when he sensed that I needed a strong pull over some rocks and did so again a couple of times, encouraging me.  Jews believe that there are times when prohibitions can be overridden by pikuach nefesh, the belief that the preservation of life takes precedence over other religious considerations.  I am not saying that my life was in danger, but this action was one of removing an obstacle that would have lessened my life experience.  And maybe that is what Hashem wants us to do for each other, even when a prohibition is most often accepted as the norm.

Every morning, we wake and give thanks for another day of life as Jews and for the gift of Torah.  With this gift, comes an obligation to remember our history. Living in Israel, we are able to visit the graves of our ancestors, to walk the sites where they struggled against enemies, where they prayed, and gave birth to the next generation. And where they created a homeland for our people.

Our milestones, as Jews, are connected to this land.  For me, the roadblocks that surface due to age are not obstacles but challenges to live this life fully while wistfully thinking about what could have been for my mother. To do this, it is important to accept those hands that reach out so that this life, this Jewish life in our homeland, can be fully realized, regardless of age or what we might believe to be obstacles, but that might actually be an open path to fulfillment.

Irene Rabinowitz is a native New Englander who made aliyah in 2014 and lives in Jerusalem. For eighteen years, she was the Executive Director of a non-profit organization serving people with chronic illness and in total has worked in the not-for-profit sector for over thirty years. She presently works as a consultant to non-profit organizations, both in the US and in Israel. She blogs, drinks coffee and single malt, and wakes up everyday thankful to be able to live in this glorious nation.
View all posts by Irene Rabinowitz →