In the third article in this Continuing the Dialog – Take 2 Series, we delve once again into history. Specifically, I am responding to my “hate-mailer” doubling down on his claim that the number of Jews living under colonial occupation in the Holy Land under either Ottoman or British rule somehow means that Jews are not entitled to sovereignty and self-determination in their indigenous homeland. Or that the “idea” of Jews moving to the land of Israel began with the Balfour Declaration and that Jews only starting moving in earnest to the land of Israel after WWII.

“men lie, women lie, numbers don’t lie this [the number of Jews and Arabs living in Ottoman and British controlled Palestine from 1517 to 1948] clearly shows that what i said about the Jews being a minority and how it all started with the Balfour declaration and how they migrated after ww2 is absolutely true. throughout history, Jews who lived everywhere around the globe could’ve migrated to Jerusalem and Palestine, but they didn’t, they did so after the Balfour declaration, and ww2. … your other sources mentioned that the British limited and restricted the immigration of Jews to Palestine, which is absolutely fiction, as you can see the number of Jews x6 from 1922 to 1945 while the number of Arabs only doubled, it is as flawed as much as it is irrelevant.”

As for you trying to defend your previous comments based on the actual evidence, let’s not play fast and loose with your actual claims. What you actually claimed was: “the idea of a Jewish state started with the Balfour Declaration, AND after WWII Jews started migrating to Palestine.” And the objective evidence and actual history demonstrates that these claims are both 100% wrong.

First, the “idea” of a Jewish state goes back to the time of the Jews exodus from Ancient Egypt (so about 3200 years before the Balfour Declaration). And since then there have been 3 independent Jewish states in the Levant (spanning collectively over 1000 years of Jewish sovereignty in the land of Israel and not a single independent Arab state in that time).

Second, even if we are talking about in a modern context, Jews have always been praying for a return to Zion and Jerusalem and the “idea” of a Jewish state independent of colonial control from Istanbul (and later London) first began as a modern day movement in 1771 (with the “Vision of Zion” movement started by the famous Jewish Rabbi, the Gaon of Vilna, whose followers – like my ancestors – moved to Jerusalem throughout the 18th and 19th Century. So, the first part of your statement, patently false.

Second, it is plain that the second part of your statement, “after WWII Jews started migrating to Palestine,” is also patently false. Not only did Jews – despite great hardship and persecution – always live in the land of Israel, Jews started moving to the land in greater numbers beginning in 1880. And with the initial freedom of movement to the Holy Land granted to us by the collapse of the Ottoman Empire, Jews began moving to the land in even greater numbers after 1917, which is why BEFORE WWII, there were over 500,000 Jews living in British controlled Palestine, West of the Jordan River.

It was also during this same time period that Arab migration to the land of Israel greatly increased. Arabs from Jordan, Syria, Egypt (where Yassar Arafat was born in 1929), Iraq, etc. all moved to British controlled Palestine in large numbers after 1917, in large part because of the increased economic opportunities created by the Jews (who established incredible farms, universities, research institutes, cities, etc. in the region all well before 1945). Does this Arab migration bother you? Or is it only Jews moving to live in their indigenous homeland that bothers you?

Your assertion about how Jews “lived everywhere around the globe” is technically accurate but irrelevant. It is indisputable that Jews were driven out of their indigenous homeland by colonialist conquerors. Likewise, it is indisputable that since then, the land of Israel, what the Romans called Palestine, was under the control of various colonial empires, who like the British and Dutch in South Africa, moved non-indigenous people (Arabs from Arabia, Crusaders from Europe, and Turks from Turkey) to settle in the land of Israel.

It is also indisputable that until 1900 these colonial empires controlling the land of Israel made it difficult for Jews to move there in significant numbers and that under the Ottoman Turks from 1517 to 1917 that the land was largely turned into a combination of desolate wasteland and swampland that could not support significant migration. A land Mark Twain described in this book “The Innocents Abroad” in 1869 as follows:

“Of all the lands there are for dismal scenery, I think Palestine must be the prince. The hills are barren, they are dull of color, they are unpicturesque in shape. The valleys are unsightly deserts fringed with a feeble vegetation that has an expression about it of being sorrowful and despondent.”

Samuel Clemons (aka Mark Twain) also described then Ottoman controlled Palestine as: “A desolate country whose soil is rich enough, but is given over wholly to weeds-a silent mournful expanse. A desolation is here that not even imagination can grace with the pomp of life and action. We never saw a human being on the whole route. There was hardly a tree or a shrub anywhere. Even the olive and the cactus, those fast friends of the worthless soil, had almost deserted the country.” 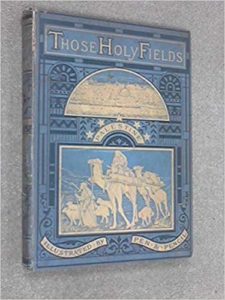 Reverend Samuel Manning, who wrote “Those Holy Fields” and numerous other books from his travels in the Middle East, in 1874 (barely a few years before the first significant immigration of Zionists to Israel in 1882) wrote the following: “But where were the inhabitants? This fertile [coastal] plain, which might support an immense population, is almost a solitude…. Day by day we were to learn afresh the lesson now forced upon us, that the denunciations of ancient prophecy have been fulfilled to the very letter – ‘the land is left void and desolate and without inhabitants.”

So it should surprise no one that a people who had been subject to persecution, racist dhimmi laws, pogroms and much worse wherever they were exiled (be it in European or Arab controlled lands) would desire to move back to their indigenous homeland and take advantage of that opportunity when it was afforded to them.

It should also not surprise anyone that it was these same people who brought this land back to life and turned it into the amazing and vital place it is today. A land that exports both food and (even more incredibly) water, with a per capita GDP that dwarfs any of its neighbors, and the only country to start the 21st Century with more trees than it had at the start of the 20th Century.

Lastly, your claim that the British didn’t restrict Jewish immigration (you even called it “absolutely fiction”) based simply on the fact that the Jewish population increased 6X from 1922 to 1945 and the Arab population (which was already larger to begin with) “only doubled” is just silly. You do realize that between 1922 and 1945 that Jews were desperately trying to escape the Nazis? And that Arabs did not have anywhere near the same motivation to move?

In any event, the British “White Papers,” which restricted Jewish immigration is certainly not “fiction.” It is as real as Jew-hatred in the Arab world and as factual as asserting that the sun rises in the east and sets in the west. The White Papers and the fact that the entire world once again shut it doors and looked the other way as Jews were being murdered solely for the “crime” of being Jewish, is just another reason, among many, that the cause of Zionism is the cause of justice.

Why Zionism is the amazing story of a displaced and long persecuted people who turned their indigenous homeland from the neglected desolate wasteland Mark Twain described in 1869 into an incredibly vibrant and strong democracy. A country that stands as a virtual lighthouse in an often dark and dangerous world for the Jewish people, whenever and wherever they find themselves being persecuted or endangered.