Gadi Eizenkot became the Chief of General Staff of the Israel Defense Forces on February 16, 2015. For over 100 days, Palestinians have been launching incendiary bombs against Israel. We have lost over 35,000 dunams of land. Fields decimated, crops destroyed. Orchards that took decades to grow are gone. 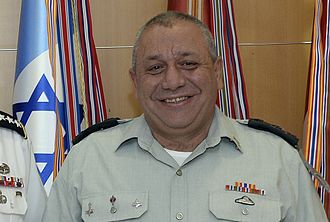 The tool that the Palestinians have used to deliver these exploding bombs are kites, and balloons – including condoms blown up, attached to explosive or incendiary substances and launched with the wind that blows from the sea into Israel.

For decades, Palestinians have attacked us with rockets and mortars and missiles. And so, Israel developed the Iron Dome, an advanced technology that can calculate the trajectory of a missile and launch its own missile to collide in midair. If the missile is expected to land in an open field, we allow it to land. If it is headed into a populated area, there’s a very high probability that we can shoot it down and save lives.

The reason why there have been so few casualties in Israel is because WE have developed the technology to protect our own people. But we have not yet developed the technology to save our land and so this summer we have watched it burn…destroyed by a people who claim our land is theirs and then systematically set about attacking the very land and fields they claim they love.

Theirs is a culture that has warped the definition of love. What can you expect from a society in which the parents proudly send their children off to commit suicide? If they would sacrifice their children, why would you think the land would mean anything more to them?

“Why not shoot anyone who launches aerial weapons at our communities, and at the cells? There is no legal impediment. Why shoot next to them and not directly at them? These are terrorists for all intents and purposes.” These are the questions that the Minister of Education, a man with extensive military experience, asked the current IDF Chief of Staff, Gadi Eisenkot.

Eisenkot responded that the Palestinians often send children and teenagers to launch these terror balloons and kites and he has a problem shooting children. Don’t we all?

After that response, Naftali Bennett didn’t argue that point, but asked another question, “And what if it’s an adult identified as an adult?”

Eisenkot than responded “Are you proposing to drop a bomb from a plane on incendiary balloon and kite cells?”

Well, yes, Bennett answered – as would most Israelis. The less tactful among us would have tacked on a “duh.”

And then, Eisenkot responded: “I disagree with you. It’s against my operational and moral positions.”

And so, I would like to explain to General Eisenkot one final point in this discussion. We’re done. The people of Israel thank you for your service and, you’re fired.

At the same time, your operational obligation is to take out any and all threats that rise against the land and people you have sworn to protect. You have a moral objection to stopping someone from bombing your country?

Already, you have been given more than 100 days to stop these terror attacks. Actually, since on average there are generally a minimum of 20 fires started by these exploding projectiles, you’ve had over 2,000 opportunities to stop the terror against our southern community. Now, add in another few hundred missiles and I’m guessing you’ve failed in about 2,500 incidents. So, you have been Chief of Staff for 1,246 days and have failed in over 2,000 incidents.