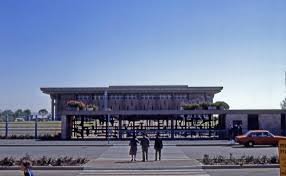 Here it is! We’ve arrived at that point in history thousands of years ago, when the Erev Rav leeched on to us, Am Yisrael.
(Shmot/Exodus 12: 37-38).  They make their official “screen” debut in this week’s parasha,”Bo”. The Erev Rav that is.  Although, they already made a few sneak-peek cameos in Chumash Bresheet.

I’m amazed every year anew that even astute b’nei Torah don’t even know how many of them there really were, and grossly underestimate the Erev Rav’s influence.  I’ve heard remarks that they’re maybe just a handful of people and surely cannot have wielded that much power.  Well they did.  The Erev Rav wield immense power just as much then as now.  And, there is FOUR TIMES MORE Erev Rav than Am Yisrael.

Am Yisrael numbered “60 ribo” whereas the Erev Rav numbered “240 ribo” (the MeAm Loez and Tanna Rabbi Yonatan ben Uziel, aka “Amuka”, both on parashat Bo).  The leaders of the Erev Rav, Yunus & Yumbrus, were the sons of Bil’am – yes, the same sorcerer who was commissioned by King Balak to go curse B’nei Yisrael.

One of the first fundamental and crucial concepts in soldiering is to identify the enemy.  And then: Know thy enemy.  Thus, it’s about time we fully understand who we’re up against – identify them and know their game, especially since they look like us and are intermixed among us.  The enemy is the Erev Rav.

They were the ones who made the golden calf, they were the Hellenists who turned B’nei Yisrael over to the vicious Romans, they were the Kapos in the Nazi camps, and they are now working just as hard to ruin Am Yisrael and Eretz Yisrael – from within and among us.

Notice that the forces pushing to dismantle Amona are not the local Arabs, but the Erev Rav “leftist”, just as it’s not the blood-thirst and violence of the Arabs within Eretz Yisrael that demoralizes Israelis and the IDF, but the “Azaria Effect”, being the totality of the Erev Rav establishment that rules over Am Yisrael in Eretz Yisrael – the court system, the Knesset politicians, the media that magnified and paraded the travesty of law and justice in El’or Azaria’s case.

It is the Erev Rav establishment that permits access to all BUT to Jews on Har HaBayit.  And today we learn that it is the Erev Rav rule here in Israel that refuses to acknowledge Jerusalem as our capital – it is they who are preventing the US embassy from being transferred to our capital.  It’s the Erev Rav, not the US, that’s stopping it.

Don’t get me wrong and think I overlook the Amalek Arabs who are most definitely Am Yisrael’s enemies.  Yes, they are.  But we also learn from the Zohar, from the section in Genesis entitled “Five Forms of Erev Rav” (sections 224-231) that the Erev Rav have the Amalek element in them too: There are five forms (or, literally, “species”) of Erev Rav: Amalek, Nefilim, Giborim, Refaim, Anakim.

With all of our hi-tec and highly sophisticated tactical night-vision gear, we’re still overlooking and underestimating the greatest enemy of Am Yisrael who’s in plain view in broad daylight.  They wear the madim of the IDF and even have Jewish-sounding names: the Erev Rav.

Am Yisrael’s karmic account with the Erev Rav goes way back.  In fact, back to the beginning of time.  We read:

“The Erev Rav are the sons of the arch-snake that tempted Eve with the Tree of Knowledge of Good and Evil, and they were the spiritually profane venom that the serpent set in Eve, from which she bore with the birth of Cain.  Thus Cain killed Abel (who was a shepherd).  Moses is a reincarnation of Abel (also a shepherd)” (Zohar Bresheet, section 285).

I’ve heard a good concise definition by way of comparing a Ger Tzeddek (a convert to Judaism) to Erev Rav.  Whereas the Ger (before conversion) is a Jewish soul in a non-Jewish body, Erev Rav are (Erev Rav) non-Jewish souls in Jewish bodies (H/T R’ Yisrael Aharon Werner ny”v).

The Oral Torah provides identifying signs, the main differentiating ones, in short, are that they hate Yisrael and lack simanim.  That is, they hate anything authentically connected with Yisrael – the Nation, the Land, and the Torah thereof.  And while Am Yisrael are noted for being compassionate and giving, the Erev Rav are not.

In Tractate Beytza 32b, for example, there is an account of Amoraim coming to what is ostensibly a Jewish community.  But when the people there failed to show compassion, our Sages outright declared them Erev Rav.

So, as we read the upcoming parshot, bear in mind the distinction our Sages pointed out – because it’s a clear distinction in the eyes of Hashem.  The Zohar and Ohr HaChayim both explain that when the Torah writes “Ami” (My [Hashem’s] nation) it refers to B’nei Yisrael, whereas when it writes “HaAm” (the nation) it means the Erev Rav (Zohar, parashat Beshelach, sections 30-34, which is part 2, 45b and Ohr HaChayim the opening to parashat Beshelach).  Both also specify that this also includes the references to “ha’am” before the actual synonymous terms “Erev Rav” and “assafsuf” appear.  Thus, although they make their official “screen” debut in parashat Bo, as already noted, the Erev Rav have actually already made a few sneak-peek cameos in Bresheet 41: 55 (“HaAm”), 42: 6 (“Am HaAretz”), and 5:20 (“Am Rav” which the Rav Moshe Chaim Armoni distinctly identifies this to refer to the Erev Rav in Bati LeArmoni, parashat VaYehi, p. 276).  By parashat Shmot there is so much interaction between B’nei Yisrael and the Erev Rav – so much going on between or beneath the lines of the pshat – that both are mentioned too many times to count.

Hashem forewarned us that He would allow the Erev Rav to rule over Am Yisrael in the final generation before the Geula, and for two reasons.  One, so that when the time comes and Hashem rejects the Erev Rav from Yisrael, they will not have a pretext of saying ‘If only You had given us a chance, we would have been good and even better than Am Yisrael in doing Your will.’  And, two, they make Am Yisrael so miserable, that we develop proper kelim (spiritual vessels) and kissufim (holy desire) for Mashiach and the Geula – the means of which are tshuva and messirut nefesh.

Our Sages tell us –

“If it weren’t for these Erev Rav who connected with Yisrael, that incident would not have happened, namely the [golden] calf…” (Zohar, ibid, section 34).

“and the purpose of [the Erev Rav] is to cause tzures [tza’ar] to Yisrael” (Ohr HaChayim ibid).

And ain’t that the truth!