I went to a town meeting last night. The mayor of our amazing city, Maale Adumim, has put his heart and soul into creating a flourishing city. In our small city of just under 50,000 people, we have a Cultural Center where entertaining productions are regularly brought to life on an impressive stage in a beautiful building. We have a music conservatory, a public library, a modern emergency medical center, three gas stations, cafes, several malls where you can buy pretty much everything, and soon we’ll even have a four-room movie theater. We have many schools, including one where two of my grandchildren plan to attend in a few weeks, a school that has existed and grown over the last few years and now simply needs permission to expand into an area that was promised to them several years ago by the mayor. We have many parks, flowers and trees that grow, seemingly unaware that we are in a desert.

Last night, he spoke of a new road that they plan to build which will enable traffic from our small religious neighborhood to exit the city quickly, rather than get embroiled in traffic from the huge skyscrapers they plan to build in another neighborhood. We learned about the security situation, plans for more services and more hours. In short, this city has almost everything, lacks almost nothing. Or so I thought after the first hour or so of the meeting. 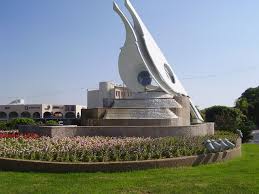 What we don’t seem to have lately, however, is enough respect for others, and that saddens me greatly. The meeting lasted almost four hours – we were assured from the start that the mayor and his impressive team of department heads would stay as late as necessary, that no question or issue would go unaddressed. No issue except the one that I came to ask about, that is. What bothered me more than waiting three+ hours and then not being given a chance to ask my question in full, was the manner in which my issue was handled. I was cut off in mid-sentence and then treated to a 10 minute monologue about the mayor’s opinion not only of the school and the school administration, but also about the people who send their children there.

It was a blatant attempt to ridicule a small minority – only 100 families who wish to educate their children within the lifestyle that they themselves live. It’s something we all have a right to do – unless you are Haredi and living in Maale Adumim, apparently. The city prefers to tell these 100 families that there is nothing available and they should, essentially, dismantle their school system and send their children to another system in town which the mayor deems to be identical…except for politics, ego, and the issue of having one particular item in their homes.

My grandson comes to my home for Shabbat and recites whole passages from the Mishnah. He can recite the names of many of the weekly Torah portions read on Shabbat, learned Hebrew letters and reading easily and tackles math problems when asked. He can say the entire grace after meals, knows nearly all the blessings for types of food, and builds the most amazing things out of all sorts of developmentally appropriate toys.

Each week, his school and his father, teach him of a world enriched with gratitude to God and our faith. As a tiny child, he would put his hand on top of our heads and give us blessings. This is a child blessed with both a keen mind and a kind heart. He is loving to his parents, his brother, his grandparents, aunts and uncles. He deserves the best the city can offer him, not the mayor’s disdain – not on a personal level, not on a religious level, not on a cultural level.

Maale Adumim is an open city with a huge variety of people coming from different cultures and countries. We have from the most secular to the most religious – and all are accepted…unless you are Haredi, of course. All that my grandson learns has been reduced, in the mayor’s short speech, to the fact that his parents do not have a television set. Fact is, from what I can tell, a rather large portion of the population in my religious neighborhood don’t have television sets either, but the black hat that his father wears to synagogue apparently changes the dynamics of this child’s rights in this city.

I haven’t had a television in about nine years, and I love the fact that I don’t. I didn’t get a chance to say that. Nor did I get a chance to say anything. I could see in those first two minutes as I began to explain, that the mayor was respectful and trying to understand my question. As soon as he realized that I was talking about that particular school, he cut me off and began literally a very loud argument consisting of only the mayor himself. No one was allowed to speak, to question, to ask, to comment. My son-in-law was there and attempted to address some of the issues, he was cut off every time and his voice overshadowed by the louder voice the mayor used.

I came to ask the mayor about a wonderful school that has 140 students, a principal, teachers, materials, desks and chairs and all they need…except the land and building promised to them by the mayor. So I raised my hand and began to speak about my grandchildren, one who is two and will attend nursery school in a building not designated for this purpose, and a second who has attended this school for four years and is now going into first grade. The mayor’s reaction was unfair, undeserved, unwarranted. And, as bad as that was, perhaps as offensive as the mayor’s rather brutal handling of the question I never got to ask, was the reaction of the religious people in the room. They are not Haredi, but part of the “national religious” camp that I myself am proud to call home. They laughed along with the mayor’s comment and in doing so, encouraged him to repeat his “joke” several times.

To the mayor of Maale Adumim, the difference between one school and the other has nothing to do with education (it does); nothing to do with the community that attends each school (it does), but rather comes down to the ridiculous idea that one community has televisions in their homes and the other has radios. The reality is that one school has some children from homes that are not strictly observant but want their children to be educated in a stricter environment and one school focuses on admitting children whose parents “practice what the school preaches.”

It is their right to choose to live the lifestyle they want and the level of religious observance that meets their needs. These are 100 Haredi families who are very community oriented. They volunteer to help each other and the community and city as a whole. Despite what the mayor implied, close to 90% of the parents are long term (most third generation) residents of Maale Adumim. The majority of the fathers have served in the Israel Defense Forces, all work and pay their taxes.

The Knesset has already ruled that a solution has to be found that respects the choices these parents have made. Regardless of that decision, what happened last night was a bad lesson for all. It is a very sad situation when a mayor chooses to lash out at a citizen for attempting to ask a question. Our mayor had more patience for two women who asked the same questions numerous times than he did for me even attempting to ask mine once.

I am hurt and angry that the mayor chose such a disrespectful way to represent and frame a situation about which I was hoping to have a calm and rational discussion. I came with ideas – but was never given the chance to voice them. I came with hope  — which was brutally squashed.

And I am disappointed in my neighbors who laughed at the comparison of the choice between a home with a television and a home with a radio. Framed in other words, the mayor’s comments were nothing less than an attempt to ridicule Torah observant Jews. There are two elementary schools in our town. One is known to be more strict. When attempting to belittle the differences between the schools, there are those who will say that the only difference between them is whether the girls wear socks or not. Such a comment is disrespectful, as was the mayor’s comments last night.

Today is a sad day for me as a resident of Maale Adumim. For the first time in 16 years of living here, I am truly dismayed that the city could behave in such a way against 100 young families who have chosen this city, love it here, and are intentionally being forced to consider moving because the city refuses to offer them what they offer all other residents – a reasonable educational system that teaches and encourages their children to live according to the lifestyle and wishes of their parents and basic respect that should be given to all.