Friday is a wonderful day in Israel. Like weekends all over the world, it is a time of freedom. Away from work, our brains are free to think, to fly, to dream. In Israel, though, for Orthodox Jews (and yes, still women especially), while our minds are free, our hands are usually very busy. With company coming for Shabbat, I have cooked chicken in the refrigerator, soup on the stove, rosemary-spiced potatoes roasting in the oven and challah dough rising on the table (and it isn’t even 10:00 a.m. in Israel). The last thing I have time for today – the very last, is calling out the Board of Deputies of British Jews. And yet, here I am.

I’m here because a bunch of people in Britain think they have a right to unfairly criticize Israel for doing what dozens of other nations in the world have done. Freedom to them, apparently, only has value if they are the ones to choose how that freedom is exercised. From afar, they judge my country when their own is falling to pieces all around them. The accusations they make against Israel would be more valid if raised there. I’ll give you two examples of the ingrained prejudice I witnessed first hand before I respond to their accusations on Israel.

Is Britain good to its Jews? No, not particularly – certainly, they were less than balanced when it came to handing over key locations in Israel to the Arabs as they pulled out in 1948. But speaking of modern times, I’ll mention taking a British Airways flight from Israel to London to England, and then to India. All normal, very pleasant. Then, I took the return flight. When the passengers were all aboard, the cabin stewards went up and down the air spraying some sort of air cleaner and/or pesticide – I never did get a straight answer. The flight from London to Israel, like the initial flights. was normal. Only on the India to London flight did they spray something in the air. I’ve flown to India on other airlines and never experienced anything like this.

Another time entering the UK, I was directed to the non-EU line. I melded into a plane that had landed, coincidentally, with a flight from India. Four Indian women were ahead of me, two more behind me. I watched at the passport control office as them clerks interrogated the last two women in front of me. They asked, “Why did you come?” and “How long will you be staying?” and “Who do you know here?” and on and one. For at least 5 minutes, they questioned each of the women. Finally, one was allowed to pass through and so I stepped forward.

The man asked for my passport. I offered both my American passport and my Israeli passport. He took one and asked how long I would be in the UK. Six days, I responded. He stamped my passport and let me through. Total processing time, under one minute. Will you tell me that Britain does not treats everyone the same? Hogwash. 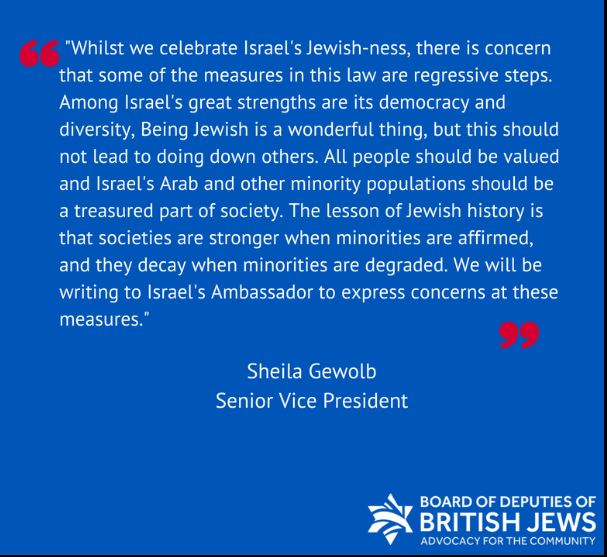 My first question for the self-proclaimed Board of Deputies of British Jews, after reading their statement on a law passed in the Israeli Knesset (parliament) yesterday is quite simple and direct. Who the hell are you?

Naturally, I wanted to respond to their comment but decided to do some research first. According to their website. And there, I found the following declaration. Please note, the “ALL CAPS” is theirs. Pompous…people that they seem to be….

Really? The voice of the British Jewish community? I don’t think so.

In fact, I know this first statement is inaccurate because I have many friends in and from Britain. When posted to Facebook, I noticed how many people strongly objected to the idiocy of the proclamations this “organization” releases in the name of others.

But let’s go on. In lower caps, they now continue, “We work to combat antisemitism from wherever it emanates, express our community’s bond with the State of Israel, defend Jewish education and educate wider society about Judaism and build bridges through interfaith relations.”

Combating antisemitism is a very honorable endeavor. One that they have failed in miserably because according to BBC, “The Community Security Trust (CST), a charity that works with Jewish community organisations and police forces, recorded 1,382 anti-Semitic incidents in 2017 – the highest total ever. Of these, 145 incidents were classed as “assaults” – up from 108 the year before.”

So they’ve failed the first of their “missions. Let’s turn to the second, where they state that they “express our community’s bond with the State of Israel.” Looks like they’ve failed this one too.

There is so much wrong with this statement. By far, the first thing is the absolute nerve of these people to think that they have a right to criticize or judge Israel. Worse, to preach.

Britain…worse, Jews who claim to represent British Jewry telling us that we should value and treasure a minority in our population.

According to The Guardian, “A third of Muslim students have experienced abuse or crime at their place of study in the UK, with most victims believing it was motivated by Islamophobia.”

You write that one of Israel’s greatest strengths is its democracy and its diversity. That is true, very true. So perhaps you should focus more on the horrendous level of anti-semitism in the UK, rather than preach to Israel. From the very start, in 1917, the British (via Lord Balfour), announced, “His Majesty’s government view with favour the establishment in Palestine of a national home for the Jewish people.”

And that is what Israel did, what Israel is. We have established a national home for the Jewish people. The law that you object to (and who the hell you are you to object to a law in Israel?), formally declares the obvious. Israel is a Jewish State. The following nations have Christianity as their national religion, or to put it more simply, have declared themselves Christian nations: Argentina, Bolivia, Costa Rica, El Salvador, Liechtenstein, Malta, Monaco,  and some regions of Switzerland. And, as you should know, the following nations have declared themselves to be Islamic nations:

Take a look at the WikiPedia page for State religions. Do you know what religion ISN’T there? Somebody will change it soon (hopefully), but as of this moment, what is missing, is Judaism. Will you write to all of them? Do you know think it an act of supreme anti-semitism to criticize only Jews for doing what nearly every other religion has done?

“Being Jewish is a wonderful thing, but it should not lead to doing down others.” How bloody British of you. “Doing down others.” We did not “do down” anyone. What we did in yesterday’s action was to formally declare the obvious. Ask anyone in the world, “what is the name of the Jewish States” and they will say “Israel” (unless they are anti-Israel, of course), which puts you in very strange company for the “voice of the British Jewish community.”

“We will be writing to Israel’s Ambassador to express concerns at these measures.” Ah, finally some humor…or should I say humour…in this ridiculous statement. Yes, you do that. You go write to Israel’s ambassador. I’m sure he’ll be very anxious to receive your concerns. And I have to ask, is this how you are combating anti-Semitism in the  US? Are you writing to people?

I can only hope, for the sake of the UK’s dwindling Jewish population, that British Jews are not relying on the Board of Deputies to see to their security as they finalize their plans to move to Israel. As to the actual members of this less-than-illustrious Board, I’d like to remind you to close the lights in the room of British Jewry when the last few Jews come home – home, to the Jewish State of Israel.

For now, shame on you. Shame on you for your ghetto mentality. Shame on you for the chutzpa in thinking you have any right to preach to Israel about how we treat members of our population, how we govern, and most of all, on Jewish history.