It is so uncool to practice anti-Semitism and BBC, as a supposedly legitimate news source, would be properly horrified should anyone accuse these fine men and women of hating Jews. My goodness, they couldn’t be anti-Semites. Heavens no. They would likely, no doubt, confess to being pro-Palestinians but even there, I might be wrong. More likely, the fine snots at BBC would suggest they are practicing proper British balance and all that. Balance, my ass.

I apologize for my language but lack of sleep will do that to a person. That and more. In the last 15 or so hours, my country has been pounded by at least 150 rockets. More than one home has been damaged, several people injured. The lack of fatalities is do to one single factor and it has nothing to do with targets and attempts.

Clearly, no Israelis have died (yet) because we build bomb shelters and a vast alarm notification system that sends our civilians to protected areas as soon as our sophisticated technology identifies the trajectory of an incoming missile.

Read that again. Our army is involved in a two front system – no, not Syria and Gaza (yet), but Gaza and Israel. If things heat up on the north, this could turn into a FOUR front war. Because no matter who we fight, the IDF has their eyes on the Israeli population – another front. As they attack key military targets in the forward front of Gaza, they are working on the Israeli front. Trying to knock down incoming missiles that would pose a threat to civilian populations. Running to assist when a missile does land in a city. This includes checking that the payload of the missile will no longer pose additional threats to rescuing or evacuating trapped people. 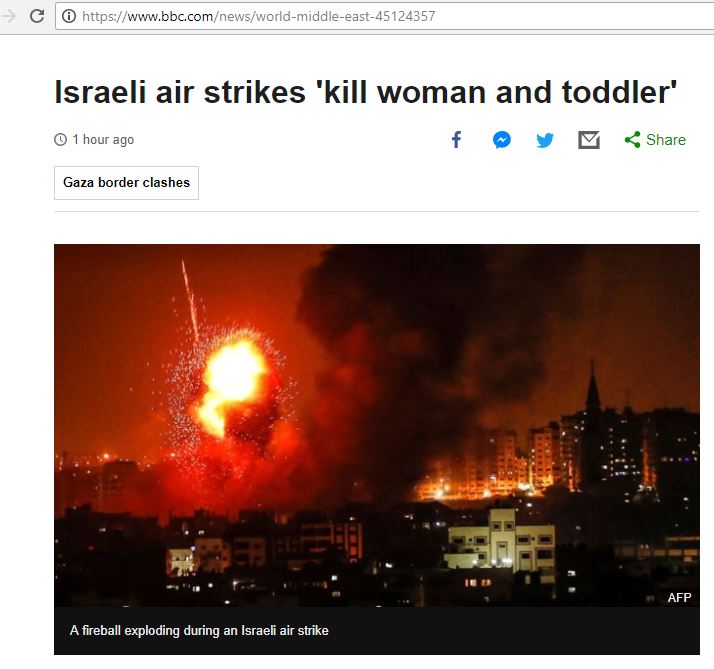 So, in less than 24 hours, we’ve had massive missile barrages and against those, we have made calculated strikes into Gaza. BBC’s reporting is nothing short of brilliant. With clear intent to mitigate any positive thoughts you might have for Israel, they balance not their reporting but the phrasing used. Let’s begin with the main picture and headlines.

“Israeli air strikes ‘kill woman and toddler'”  The small quotes that you won’t notice when reading this are because they want to be honest. They don’t know that a woman and a toddler has been killed in Gaza. They are trusting the Gaza Health  Ministry.

And who runs the Gaza Health Ministry? The Hamas government which takes credit for launching 150 rockets at Israel. And, says the GHM, NOT ONLY did the Israeli retaliatory strikes kill the woman, but she was pregnant too. Maybe she was. Maybe she wasn’t. And maybe she doesn’t even exist.

After all, in another claim by Palestinian health authorities, close to 5,000 people were killed in a Jenin operation which turned up (according to the United Nations investigation). a total of 52 bodies. And, of the 52 bodies identified, 41 of them were confirmed combatants.

But sure, let’s put in the headlines of a major news outlet unconfirmed information from an organization that has every reason to lie and no reason to be truthful.

Let’s take it one step further, though. How about we give the GHM more credit than it deserves and allow for the possibility that these civilians were collateral damage from an Israeli airstrike. Since when does it make sense that you write from the conclusion of an event and not from its source? So how does BBC report the “source” of the latest violence. Well, according to the IDF, it started after Gazans opened fire on an IDF vehicle.

What happened next? Israel responded on the source of the gunfire and took out a Hamas sniper position. Wouldn’t any country do that? Now look at the next sentence.

After Israel’s response, what happened? Well, “dozens of rockets were sent towards Israeli territory.” Sent? Gee, who sent them? Not FIRED, but sent. Dear BBC, you SEND a letter, you FIRE a missile. 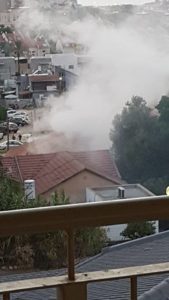 And what was the target of Hamas? Israeli soldiers. Well, if you are at war and attack the military, one could argue that to be a legitimate target. Israel fired back at the “militants” (we call them terrorists). Again, a legitimate military target. And what did Hamas do. As BBC said, they FIRED dozens of rockets “toward Israeli territory.” No, not “TOWARD” – that’s just bad reporting. Toward implies “in the direction of” when in fact, they fired INTO Israeli cities. Direct hits on several locations. They fired INTO Sderot dozens of times, injuring and damaging.

Those are homes in the picture to the right, not military targets firing at them. A refreshing and somewhat surprising piece of information follows in the BBC report. It seems, to their credit, that someone from the UN actually condemned Hamas firing against our civilians though in asking “both sides to step away from the brink” Nickolay Mladenov is continuing the unfair policy of equating Hamas firing on Israeli cities with Israel targeting Hamas military targets.

And then, BBC, true to form, wants to make sure you leave their page with a proper attitude against Israel. First, you should know that “160 Palestinians have been killed by Israeli forces.” Gee, BBC, and what were these 160 Palestinians doing when they were “sent” to their deaths? Well, mostly they were protesting, responds the BBC. And what were they protesting. The right of Palestinian refugees “to return to their ancestral homes in what is now Israel.”

That response alone deserves a full article. Unless you buy into that nonsense that Jesus was a Palestinian, the ancestral home of the Palestinians dates back about 100 years and just so happens to have been built on the ruins (some of which they cased to be ruined) of the Jewish people. THAT ancestral homeland dates back almost 4,000 years including recognizing Jerusalem as our capital some 3,500 years ago.

Isn’t it funny that BBC needs proof that the Palestinians were firing at Israeli soldiers (even though there is video evidence showing this) but are ready to declare whose ancestral home this is?

Isn’t it strange that BBC only felt it necessary to mention 150 rockets fired at over one million people AFTER we responded and, according to the Gaza Health Ministry, there were civilian casualties on the Gaza side of the border? Why wasn’t the blood of Jews of value to the BBC? Why when Gaza fires rockets and mortars at Jews is this not mentioned?

Once we identified such anti-Jewish sentiment as anti-Semitism. Perhaps it is time to properly identify the very essence of the problem – both in terms of the Middle East AND in terms of BBC’s so-called reporting.

It’s time to call BBC’s reporting what it is – anti-Semitism.