Oshrat Kotler is a news anchor on Channel 13. She is a journalist. What she is not, though she has yet to realize it, is a news maker. As a journalist, her job is to report the news. But she, like too many others before her, have lost sight of what is expected of her. Last week, she opened her mouth – that was her first mistake. “We send the kids to the army,” she said, “to the territories and we get animals. This is the result of the occupation.”

Perhaps realizing that she had crossed major red lines in Israel, Kotler attempting to explain that which is so wrong it wasn’t worth the effort.

I wish to stress, please understand, my own children and their friends are all combat soldiers in the territories for many years; my own friends as well. My criticism was directed solely toward those soldiers that our control of the Palestinians in the territories has led them to harm innocents.”

I would just like to add that those who truly listened to what I said at the introduction to the story, and didn’t rush to slam me online, realized I was actually in favor of lenient punishment for the accused soldiers, since we are the ones sending them into this impossible reality. Are you happy now? I will continue expressing my opinion on this show. You won’t be able to silence me!

Those are your words, Ms Kotler and now I offer you mine.

An Open Letter to Oshrat Kotler

Sometimes, it’s easier to start at the end of someone’s rant than at the beginning. So, allow me to start by saying that I am not attempting to silence you. Unlike the misinformation you spoke, I will focus on truth. In reality, rather than attempting to silence you, I am interested in getting you removed from a position that allows your voice to be readily heard. What is the difference? 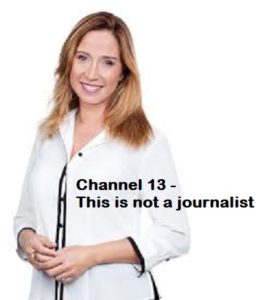 While silencing you would mean that I am against freedom of speech, I am merely attempting to remove the power you have abused. You have every right to say what you want just as I have every right to disagree. But when someone abuses their power, it is our obligation to do what we can to take that power away from them.

Ultimately, you are nothing without the microphone we viewers put in front of you. It is our right not to silence you, but to take that microphone away. That is my goal.

Recently, you spoke of your children and their friends as “all combat soldiers.”  And then you blamed the army, settlers, and Israel for turning soldiers into animals. Offensive? Well, you had to have known it was. But more, I’m writing to tell you that ultimately, those words reflect more on you than on the soldiers.

All me to clarify that I too am the mother of soldiers. And yes, my sons were all combat soldiers as well (Artillery, Kfir, Givati). They risked their lives wherever they were sent. Twice, one was sent to Gaza, which even you, I assume, would not call occupied. At least four times, my sons’ units were attacked without provocation. In one incident, 23 soldiers in the unit were hurt by a terrorist who rammed BMW into their unit. Who was the animal in that attack?

Two of my sons volunteer regularly for the Magen David Adom service – one as an ambulance driver/medic and the second as an assistant medic. They rush in to help when needed and never ask the religion or beliefs of those they help. My city, located in land you would foolishly call “occupied” has one of the highest rates of service in the country. These young people go in honor, fight in honor. More, they stand on our borders – all our borders, and defend this land while you insult and mock it from behind the safety of a television camera and a microphone.

Our young come back and volunteer; they work hard and are a credit to our city and to our country. If your children came out as animals, one can only assume that is perhaps more a reflection of your home than of the army.

Worse still, what can we learn from your unfortunate words? Clearly, the message is that you sympathize more with the murderers of our people than with our own sons? After all, where in your speech did you condemn the terrorists? For a unit recently hit by terror attacks, you couldn’t even find a moment to speak of two of their friends who were killed in cold blood.

A few weeks ago, my youngest son and a friend packed our car with coffee and a burner and nosh and set off to meet these very soldiers – to sit and talk with them and offer them comfort. They spoke of their friends and of their dedication to this land. Animals? You dare to call these fine young men animals?

The ugliest of words delivered with absolutely no proof. That isn’t journalism, Ms Kotler. And so I call on you to have the decency to step down (or be fired). Israel has enough enemies in the world. A “journalist” who uses her microphone to judge others without facts and one that lies without hesitation – that’s not what this country needs or wants. There is no occupation, Ms Kotler. If we are to follow the rule of international law, these territories you correctly termed “disputed territory.” Stop your rhetoric and if you want to push your agenda, do it without the microphone of Channel 13.

You’ve failed and so, it’s time to move on. Thanks for your “service” and let’s hope you don’t let your ego stop you from doing what’s right. Be gone because we have enough forces working against us in the world without having to open the news and see it broadcast from inside Israel.

And if you’re really bored, consider going to Gaza or Ramallah. Go to the homes of the murderers of the Fogel family. Of Ori Ansbacher. Ari Fuld. Koby Mandell, and so many others. That’s where the animals are, Ms Kotler.