I doubt there’s an Israeli alive over the age of 15 (if even that old), who hasn’t come across a place that the police have closed because of a suspicious object. It happens quite regularly, all over Israel. Mostly, your only option is to have patience and wait. You can stand there and watch or you can detour around. 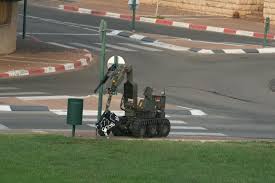 This morning as I drove home after yet another amazing painting lesson, I noticed a police car blocking the left fork in the road. No big deal really.  I live in a neighborhood that is essentially a figure “8”. My home is on the right side of the lower circle. At the top and middle of the 8 are traffic circles.

Given that I couldn’t take a left, I took the road on the right. At the bottom of the circle, as I prepared to make a right into my street, I noticed another police car again blocking the left side of my neighborhood.

The most likely scenario is indeed what happened – a suspicious object that has to be investigated. A special unit of the police is called. They come with a large van, open the back doors, and control a robot to roll out of the car. The robot does what it is best humans do not. It approaches the bag and with cameras and sensors and robotic arms, it is determined whether any question of danger can be ruled out or if the object needs to be “exploded” in a controlled explosion. A boom, that shocks you a bit when you hear it.

I haven’t heard any boom, so I don’t know if the police had to explode the object. It could have been someone’s backpack, someone’s pocketbook, a gift someone had bought and left behind by mistake.

Once, it was David’s backpack…they blew it up and he had to explain to his sister that her copy of the book “Holes” probably had at least one hole in it.

One time, I was blocked from moving down the street and decided the detour would likely take longer than if I just waited. It was near the Jerusalem Central Bus Station and across the street, someone had left a small suitcase. We could see that on both sides of the street, police were keeping people back. I watched the robot drag the suitcase, turn it over and finally I heard two booms. When it was over, the people across the street were “released” by the police and they started moving. For some reason, the policewoman on our side was still blocking us and so I pointed out what was happening on the other side.

She looked and then, almost reluctantly, agreed to let us go, ‘but go carefully,” she said.

Go carefully. I loved that about that day; and think of it each time there is a “bomb scare.”

Today’s incident happened in my neighborhood, not too far from where my granddaughter was attending nursery school (Gan, in Hebrew). The police did what they had to do, everything is fine.
And so, go carefully today and every day. And know that we are blessed to live in this country, even with the occasional concerns over suspicious objects.