Among Jews there’s heightened concern about a rise of anti-Semitism. It’s true that in recent years there has been a general increase of anti-Semitic incidents worldwide, and with it a greater awareness of such incidents and how they are responded to. But the truth is if you’re Jewish, more likely than not you’ve experienced anti-Semitism directly or indirectly at some point. So while maybe there’s a spike in incidents now (about which it’s crazy by the way that organizations even exist and are charged with having to keep records of these), sadly being Jewish involves anti-Semitism, today and going back millennia.

Most Christians I know are appalled by the fact that there is anti-Semitism to begin with, but truthfully most don’t really understand it, which is understandable. For many, the pervasive reality of anti-Semitism is hard to digest, or even believe. I wish to share some insight of experiences Jews have lived with just in the past decades, and hope this will increase awareness, will be a catalyst for understanding the threats that Jews live with, and help purge anti-Semitism in all its forms. I hope to infuse sensitivity among people who do care, and break down even the most “benign” of these thereby putting in the spotlight those who engage in anti-Semitism from a perspective of hate, but also out of ignorance.

Jews have a radar about anti-Semitic incidents which take many forms. Of course there are “big” things such as genocide associated with the Holocaust, and other anti-Jewish pogroms that plagued Jews throughout the diaspora. There’s an endless threat and realty of war and terrorism, not only in Israel and not only directed at Israelis. Anti-Semites delegitimize Jewish presence in the Land of Israel, but also threaten Jews and Jewish institutions worldwide. There’s Holocaust denial which takes many forms; from people on one hand denying that the Holocaust ever took place, and on the other hand, affirming it took place, but with the notion that its used by Jews to gain sympathy and control the world. There’s basis to neither, and they openly contradict one another, but when it comes to hating Jews, truth doesn’t matter.

And there’s the BDS scourge which claims to be “only” anti-Israel, but infuses anti-Semitism into a detestable delegitimization of Israel. BSD uniquely targets Israel as a Jewish country, holding it to standards to which other countries are not held. It makes accusations about Israel for allegedly discriminating against Arabs, but does not care about acts of Arabs or others whose actual atrocities are documented and abhorrent, and put Arabs much more at risk elsewhere than in Israel. BDS is anti-Semitism to the core.

There are many instances of denial of anti-Semitism, or looking the other way, which are also not only anti-Semitic, but embolden the anti-Semites.

With awareness of anti-Semitism being alive and well as a result of protests throughout the US and other parts of the world, one irony is that hate groups on the right and left actually agree on their detesting of Jews, even as they fight one another.

Anti-Semitism is part of being Jewish, whether in Israel where Arab anti-Semitism surrounds us and in many ways defines us in the consequence of having to defend ourselves from incitement and the threat of war and terrorism. Jews in the diaspora face threats in many forms as well. Consequently, Jews and Jewish communities around the world live looking over their shoulder for their physical safety, requiring levels of security that non-Jews can’t imagine. Both physical threats and innuendo make a Jew in the diaspora never fully comfortable because anti-Semites don’t care how much a Jew has assimilated into the prevailing culture. It’s why a college professor of mine instructed that Jews should always have a valid passport.

For decades I have been overwhelmed by fellowshipping with Christians whose support for Israel and the Jewish people are unshakable. I am moved not only by the unconditional love but how, for many, the notion of anti-Semitism is not only abhorrent, it’s something that is completely foreign. Nevertheless, Jews and Christians look at anti-Semitism differently. For Christians, it is seen as repugnant and against God’s heart. Many feel the need to repent for centuries of anti-Semitism undertaken in the name of “the church.” Many Christians today can’t get their arms around the notion that anyone who claims to be a Christian would do anything other than love Jews unconditionally, if only because Jesus was a Jew. It raises the question that if Jesus were to come back today, would people who call themselves Christian hate him, hurl epithets his way, or even try to murder him because he’s Jewish?

For Jews, it’s a fact of life; something that we live with and expect. In writing this, I realized how many instances of anti-Semitism I’ve experienced personally that I dismissed. There are perhaps many different definitions of anti-Semitism, all of which are accurate and complementary, and many more ways in which anti-Semitism is embodied. But for most 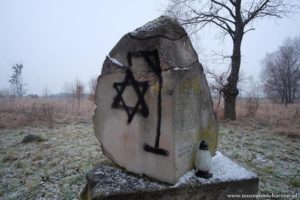 Jews, no matter how you define it, it’s one of those things that you know it when you experience it.

A few years ago a Christian colleague invited me to her office once and closed the door. In a hushed tone she told me she was working with a growing network of people to set up an underground to hide and protect Jews when things became dangerous in America. Truthfully, while her love was clear, I thought she was nuts. Now, I’m not so sure and I want to post her name and number on social media because of the prevailing attitude that anti-Semitism is becoming acceptable. As upsetting as it is to address the need, it’s heartwarming that Christians would care so much to do so.

I could write about any number of instances personally, from experiencing anti-Semitic jokes, slurs, and violence. One of the most jarring, however, was from a Christian friend who truly loves me and Israel, but made an off handed comment propagating an ugly stereotype about my not having a “Jewish nose.” I could also write about actual discrimination to which I have been subject, vulgar comments by anti-Semitic trolls on the internet, and more.

There are far more than 50 shades of anti-Semitism, and my sharing these is the product of personal experiences all over the globe, including the US, UK, Australia, Europe, Russia and more. Here are some examples of kinds of anti-Semitism in different categories that are offensive, discriminatory, propagate stereotypes, threaten, physically assault and more. It’s extensive, but by no means exhaustive.

Words –on line trolling and anti-Semitic posts; saying that Jews killed Jesus; being called a devil; epithets such as being called or referred to as a kike/Christ killer/dirty Jew/Jew bagel/blood suckers/fonts of corruption/spawn of Satan/creatures of darkness and many more; threats to finish the job Hitler started or that our time is up and we will go up the chimneys again soon; pretend sneezing saying “aJew;” derogatory comments by fellow students and teachers; use of the phrase “Jewing down;” saying that Jews are all greedy/dishonest/cowardly/underhanded/etc.; being told Jews control the media/government/banks etc.; defamatory and threatening comments in endless print and on line publications; etc.

Stereotypes and Libels – propagating the blood libel that Jews kill Christian children to use their blood to make matzah; that Jews run the world and are greedy; assuming someone wearing a Star of David necklace is a witch; comments such as “You don’t look/act/talk like a Jew; looking for, asking about, or touching one’s head looking for horns; claims that Jewish kids only study so parents would give them money; called a pervert or part of a cult for circumcising baby boys; endless Jewish jokes with innuendo or mocking the Holocaust; comments about having a Jewish nose, looking Jewish; someone being told he was “the most generous Jews” I had ever met; claims that Jews controlled the mafia which control the drug dealers, which show how Jews control the world; calling Jews thieves; that all Jews are greedy and only care about money; claims that Jews were responsible for 9/11; rationalizing that the Holocaust was justified because Jews are evil, or the Holocaust was a plot for Jews to gain power; branding Jews as never doing anything for anyone; etc.

Actions – A waiter spit in Jewish customer’s food; spitting at people; children taunted and threatened by other children; rocks/eggs/pennies/etc. thrown at people; anti-Semitic graffiti, Stars of David, and swastikas painted on school lockers/houses/cars/ synagogues; public mocking and ridicule; Hitler salute with “seig Heil;” dead pig left on the steps to a synagogue; pork sausages were put in a child’s lunchbox; Tuesday is ‘Jewsday’ when all the Jewish kids were a target for abuse, bullying etc.; religious articles destroyed and desecrated; various levels of assault; etc.

Discrimination – pledging a fraternity; university quotas; banned from a pool for wearing modest clothes; banned from clubs; rejected by condo boards for housing; denied professional promotion or harassed in work; publically ridiculed personally and religiously; denied seating in public spaces; not providing accommodation for religious observance; kids refusing to play with Jewish kids; being introduced as “my Jew friend;” disgusting generalizations and public statements; a teacher telling her class that if they have Orthodox Jews in their groups they might be at a disadvantage since Jews take off time for Jewish Holidays; etc.

I lost count after 50. Some of these are general “themes” and some are specific to people who have shared them. None of these are exhaustive and I hope others will post their experiences. But I also hope that this will resonate among Christians who love Israel and the Jewish people, not from a perspective of guilt, but creating awareness and sensitivity. I was taken back by my friend’s off handed comment at not having a Jewish nose. I never called him out on it which may have been a mistake of mine, because I know he meant nothing negative by it, and I didn’t want to upset or offend him. But I also learned that even in someone raised to love Israel and the Jewish people, anti-Semitic stereotypes run deep.

In the coming weeks Jews will observe Rosh Hashanah and Yom Kippur, and between them the Ten Days of Repentance. We are obliged to look deep within ourselves and reflect and pray about our personal shortcomings and seek atonement, from God and from people who we’ve hurt. Much more than a New Year’s resolution, at the beginning of the Jewish New Year, we strive for new beginnings that relate to our relationship with our Creator, with fellow human beings, and to dig into every aspect of our lives to examine our flaws and vow that in the New Year we will do better.

To the extent that non-Jews begin to understand the reality of anti-Semitism that Jews face, at this season you can help breach the gap, act in accordance with God’s heart, and help give Jews a sense of security from unconditional love and fellowship. Please share ways in which you have done so, or are now motivated to. I pray that, together, next year as we approach the same season of awe, we will do so in a way that’s more redemptive, and perhaps where Jews can worry a little less about our physical security, and focus more on the spiritual aspects of the season as we approach our houses of worship.

Jonathan Feldstein was born and educated in the U.S. and immigrated to Israel in 2004. He is married and the father of six. He has a three decade career in nonprofit fundraising and marketing and throughout his life and career, he has become a respected bridge between Jews and Christians. He writes regularly on major Christian web sites about Israel and shares experiences of living as an Orthodox Jew in Israel. He can be reached at FirstPersonIsrael@gmail.com.
View all posts by Jonathan Feldstein →