Over the past few weeks, I have had numerous people ask me about my silence in the blogosphere. While I have posted much (too much?) via Facebook and Twitter (if you are not following me you can check out @ravzev1 on twitter), as far as writing a blog, well, it has fallen silent.

And there is a reason, and it isn’t “writer’s block.” Instead, it is the opposite issue: There are too many topics to write about, and every time I find myself sitting down to write on one of those topics, I see that someone else has already written what I feel. I don’t write just to post, nor do I write just to hear myself “talk.” I write because I feel at times, I have what to say that can motivate people, affect their opinion, or get people a little upset or uncomfortable. You see, when people are never made to feel uncomfortable, then it is “business as usual.” In that environment, rarely do things ever change.

So, I want to end that silence with this blog, because I do feel I have something to say that is somewhat “touchy” and some may even find it offensive. But, since when has that ever stopped me?

Anti-semitism. Jew hatred. Hatred of Israel…and a lot of silence.

It has not only been on the rise around the world, but in particular in the United States.

CNN reported this week that Anti-Semitic acts in France increased by 69% in the first nine months of 2018, as per their Prime Minister Edouard Philippe. The report was met with silence.

According to the ADL, the number of anti-Semitic incidents in the United States surged by 57 percent last year. That fact was reported “way back” in February of 2018. That was before the Pittsburgh massacre. That was before the seven fires set recently in shuls in the NY area. That was before the iron bar being thrown through shul windows and before a guy in California ran around ripping off the sheitels (wigs) of married women.  That was even before the numerous Jews walking down the street in various cities who were beaten up for the crime of being Jewish.

And then their is the ice cream that causes you to scream. Ben & Jerry’s recently came out with a new flavor called “Resistance.” Its social-justice purpose in producing such a flavor was to be “a movement to lick injustice and champion those fighting to create a more just and equitable nation for us all,” according to their press release. Sounds noble..until you see that people like Linda Sarsour is one of those in support. Sarsour, a rabid anti-semite and rabid hater of Israel stands proudly behind this product.

And then there is Louis Farrakhan, who is always good for a good sound bite. He said recently that Jews were “termites.” I guess I missed the worldwide condemnation of him for calling all Jews this term.

Yes, not only is anti-semitism increasing in numbers of incidents, but it is becoming de rigueur  in some areas. Whether it is California, Florida, New Jersey, Pennsylvania or South Carolina, the rapid growth of violence against Jews is downright scary. Swastikas painted on buildings, shuls, street corners, etc has also increased. The violence against Jews on campuses is out of control and the OPENLY violent actions against Israel on college campuses continues unabated.

Quite sadly, this little brief list of activities in the USA (and I have barely mentioned the virulent, open anti Jewish attacks in Europe) has me quite worried. The worry stems from two things. One is that what I am hearing — or more correctly NOT hearing — is an uproar in the Jewish community around the USA against these continued attacks. Yes, tens of thousands, Jews and non-Jews have stood shoulder to shoulder in the wake of the Pittsburgh massacre. But I am not referring to that case. I am talking about the nearly daily attacks on Jews in so many areas–both against their person or against their property. 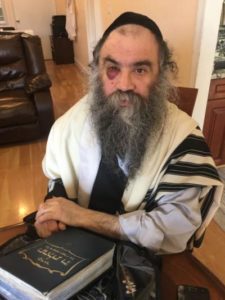 (Menachem Moskowitz, who was attacked a few weeks ago.)

I am hearing, with apologies to Simon and Garfunkel, the sounds of silence. Yes, I know, there have been individual outcries and a few rallies. But there are no mass efforts to keep anti-semitic attacks on the consciousness of the American people and keep it on the front burner.

Do I think that we are headed towards another Holocaust? As far as the USA, I do not believe that for a moment. But what I do believe is that Jews, of any persuasion, are less and less safe every day in the USA. The attacks will continue and get more frequent and more aggressive. For those saying that it happens in “other cities but not in my home town,” sorry to tell you but you are in for a rude awakening. I can not imagine that the level of overt anti-semitic acts today has been this bad since the end of WWII.

The other thing I am not hearing is discussions regarding the Jewish Homeland.  Baruch Hashem, very few Jews have made Aliya in the past many years because they “had” to, due to their circumstances. I still believe that, in the United States, Jews are not in the position that they “have to” make Aliya, due to current (and not so current) events.

However, I am not so sure that this will always remain the case.

The incidents get more frequent and more violent with every passing day. While a large percentage of those living in the States are not rabid anti-semites, the amount that are (and are proud of it) is growing rapidly. And that is a scary thought.

I am not going to end this post and say I think all Jews need to make Aliya before it is “too late.” First, that is fear-mongering and secondly, I am not so sure there will be a “too late.” Rather, I am going to end with a plea.

Open your eyes. See what is going on around you. And, as I said, if these attacks are not in your immediate vicinity, do not be lulled into a false sense of calm. Then, when you have a quiet period of time, where you can sit and truly think about the future of the Jewish people in the Diaspora, think about what the priorities are in your future. Think about where you see your Jewish community in this rise of anti-semitism and ask yourselves if you are better off in the Diaspora or better off at least considering making your future in Israel.

I will never apologize for encouraging people to make Aliya. I will never give up on that idea. All I am saying is: things are indeed changing around the world. As “history” moves along and changes on a daily basis, ask yourselves these important questions; look into your heart and into your future.

Just one thing–don’t let the future hear your sounds of silence.