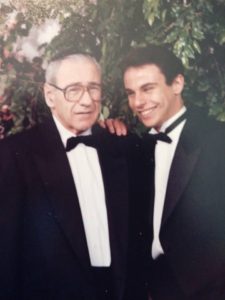 The week of Yom Ha’atzmaut, on 6 Iyyar marked 23 years since my father died. His death was “all of a sudden”and quick. Although he had a long cardiac history, it was something very unexpected. The medics at the scene told me that even had he been in a good hospital and this heart attack occurred, in all likelihood, he would not have survived. So, that evening, in spite of my shock, sorrow, and pain, I realized and accepted the fact that it was his time to go.

On top of all of this, my mother predeceased my father by a mere five months. Though I was a new father and a relatively new husband at the time in my mid-twenties, I looked at myself as an orphan and I was once again crushed by tragedy.

However during the Jewish mourning period of shiva which lasts seven days long, something very bizarre happened and I know that I will never forget it.

It happened during the night of the third day of shiva. I had a vivid dream, and in that dream, I was in a clearing in the middle of a forest. It was the late morning and I remember the weather being very pleasant. I was standing in this clearing by a path that came from the trees to the far right of me and I remember that I was looking towards that direction. Suddenly, I see this figure. It was an older man walking with a cane from that part of the forest.

I realized after about two seconds that this older man was my father. He was walking along this path and I was standing by the path, yet I realized that he was not walking towards me, yet he was just going to pass by. I called out to him, “Hi Dad”, and he responded, “Hiya Rich”, with some good cheer in his voice. I then asked, “How are you”? He responded, “Fine”. I asked, “Are you sure”? He said,”of course”.

As I thought and somewhat expected, he walked past by me as he seemed to be headed somewhere.

I remember calling out to him, “Dad, where are you going”? By now his back was towards me and he said that he was going to a very nice, lovely place. His voice was calm, serene, and he seemed happy.

My head was turned towards the left by now as I watched him approach what seemed to be a subway station. He continued walking and turned to go down the stairs. I then realized that instead of the guardrail surrounding the stairwell, in it’s place was a tombstone. As he descended the stairs he said, “oh what a beautiful place, how lovely. Well, goodbye Richie”. I responded, “goodbye Dad”. I watched as he descended the stairs from where I was standing still until the top of his head disappeared. I then woke up and to this day, nineteen years later, I still remember this dream vividly.

No. This is not the end of this story. I must add that  I only shared this with my wife, my sons and some very close friends at the time. However I did not broadcast this to the world.

Some many years later, and a week before my Dad’s yahrtzeit, my cousin Ron phoned me. My cousin is a prominent Rabbi in an ultra-orthodox city in the center of Israel. We grew up together as our home was a multi-family dwelling on the ocean front in Belle Harbor, a town on the Rockaway peninsula located within the New York City limits in southern Queens. Now as adults,  we live very different and separate lives and we don’t speak that often. Yet, every time we do speak, it’s as if we spoke the week before. We address each other by our English names and laugh and share stories like we always did when we were growing up.

He phoned me because he just had to tell me that he had a very vivid dream about my father. I asked him, Ronnie, did you know that his Yahretzeit (Yiddish for anniversary of his death) is coming up next week? He said, “really? Wow”.

He then proceeded to tell me about the dream. He said he dreamt that he was in New York, sitting on a seat in a public place, while all of a sudden, he saw my father sitting across from him. He was so surprised and shocked to see him and he called out to him, “Uncle Abe! Uncle Abe is that you”? My dad looked up and his face lit up as it always did when he saw Ron. Dad shouted out, “Hiya Ronnie”. Ron told me that he ran over to him and dad shook his hand warmly. He told me that he greeted my father in Hebrew, “Shalom Aleichem” and my dad responded with a hearty “Aleichem Shalom”.

He said that my father was doing just fine and he was so happy to see him and they chatted for a while. My father then said that he had to go and help out his wealthy uncle distribute money. Yet he gave Ron a very warm goodbye. My father turned and walked away. Ron then woke up.

One most significant thing about Ron’s dream — it took place in a subway station.